Today, we honor the feast day of Hildegard of Bingen, a twelfth-century Benedictine abbess who was not elevated to sainthood until 2012. She was a prolific writer and composer, leaving us dozens of songs and poems, and nine books, including works on medicine and pharmacology. She served as somewhat of an advice columnist, too, as she wrote over a hundred letters to the important people of her day, after they had asked for her counsel.Even with her impressive CV, though, I think the best example of Hildegard’s godly life comes from late in her life:

“Late in life, she did run afoul of church authority. A man who had been excommunicated for involvement in revolutionary activity died, and she gave permission for his burial in the abbey cemetery. With the local bishop absent, the canons of the church demanded Hildegard exhume the body from consecrated ground. She refused, claiming she knew the man’s sins had been forgiven. So the canons authorized civil authorities to dig up the body.

“On the evening before their arrival, Hildegard, vested in her attire as abbess, went to the grave, blessed it, and then, with the help of her nuns, removed all the cemetery markers and stones, so the plot of the excommunicated man could not be identified. The irate canons placed the abbey under interdict; Mass, sacraments and the singing of the divine office were forbidden on its premises. Still, she would not yield. Church authorities finally lifted the interdict after Hildegard reminded them that those who prevent God’s praises in this life will, in their own afterlife, go to ‘the place of no music.'”

I mean, I think she told them to go to hell?
Hildegard was dogged in her determination to keep a man’s remains in the fold of the abbey’s cemetery. When most of us would have thrown our hands up in desperation when the authorities wanted to dig someone out of his grave, she took it to the next level. Hildegard shows us that one lost sheep was worth overturning an entire graveyard worth of graves, and our identity as children of God supersedes any identity that could be distinguished from a grave marker. Hildegard believed that the inclusion of that one soul was worth sacrificing all of the liturgies and sacraments that were forbidden by the authorities. 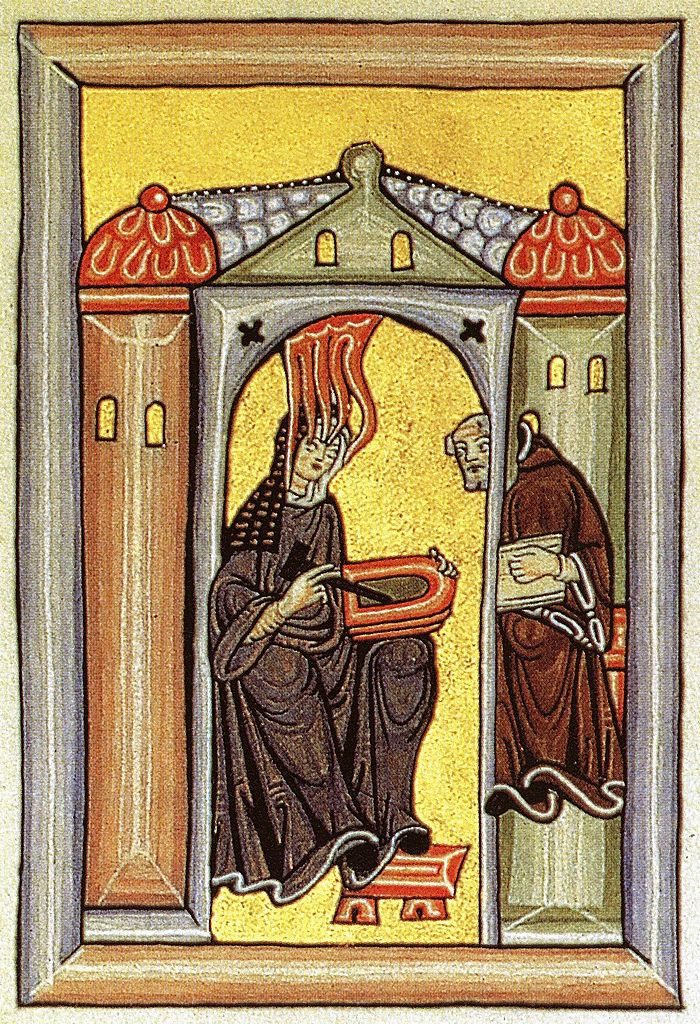 While we may or may not have the opportunity to thumb our noses at the liturgical authorities of our day, all in the name of inclusion, we can all take Hildegard’s determination as an example of God’s determined love for us. God is so determined to include us all in his kingdom that he sent his only-begotten son to save us.

Saint Paul told the Romans that he was “persuaded, that neither death, nor life, nor angels, nor principalities, nor powers, nor things present, nor things to come, nor height, nor depth, nor any other creature, shall be able to separate us from the love of God, which is in Christ Jesus our Lord.” Hildegard seems to have taken these words to heart, as neither ecclesiastical authorities nor interdicts could separate one man from the forgiveness represented in her inclusion of his remains in the cemetery. I pray that we all take these words to heart when we remember Hildegard today.