On many occasions my sisters would bemoan being the younger two, and at the top of their grievance list was being perpetually known as “Meaghan’s younger sister.” I have heard this woe from many a youngest child, and now that I run a summer camp I’m sympathetic to those who follow older siblings. It is far too easy for those of us in charge to make assumptions about the younger family members that cycle through our programs year after year. While we appreciate all children for their unique qualities, I must be honest that younger siblings sometimes need to work harder to have their individual attributes highlighted.

I can almost hear my sisters’ sighing with relief to learn that being largely identified as “someone’s sister or brother” dates back to biblical times. Saint Andrew the Apostle, remembered on this date, was largely known as the brother of the much more widely known Simon Peter, who appears center stage (for good reasons and bad) throughout our gospel texts. Andrew, on the other hand, appears infrequently, and is most known for bringing the young boy with the loaves and fishes to Jesus at the feeding of the multitudes. That’s a cool story, but doesn’t exactly establish his legacy.

Saint Andrew is the Patron Saint of Scotland, but I can’t help but think he’d be an even better Patron Saint of Younger Siblings. Andrew, like most younger siblings, understands what it’s like to live with a sibling in the limelight while struggling himself to find his path.

There’s something important for siblings everywhere to realize though: Andrew answered Jesus’ call first. He dropped his nets, left his job as a fisherman, and chose a path that would change his life forever. He was so excited about this new path that he brought his brother with him. Simon Peter’s experience as a follower of Jesus has been such a gift to the church, but it’s a gift we have because his brother invited him to follow.

The best part of having family – biological or chosen family – is the intimate way we share our lives with one another. We share our lives and our stories and our hearts with those we love, and we invite our family along with us for the ride. Andrew quite literally brought his brother along for the ride, and in doing so he brought his brother closer to God.  I would consider my life well-lived if at the end of it I can say that I helped my loved ones be closer to God. I know my sisters have certainly done that for me – over and over again. 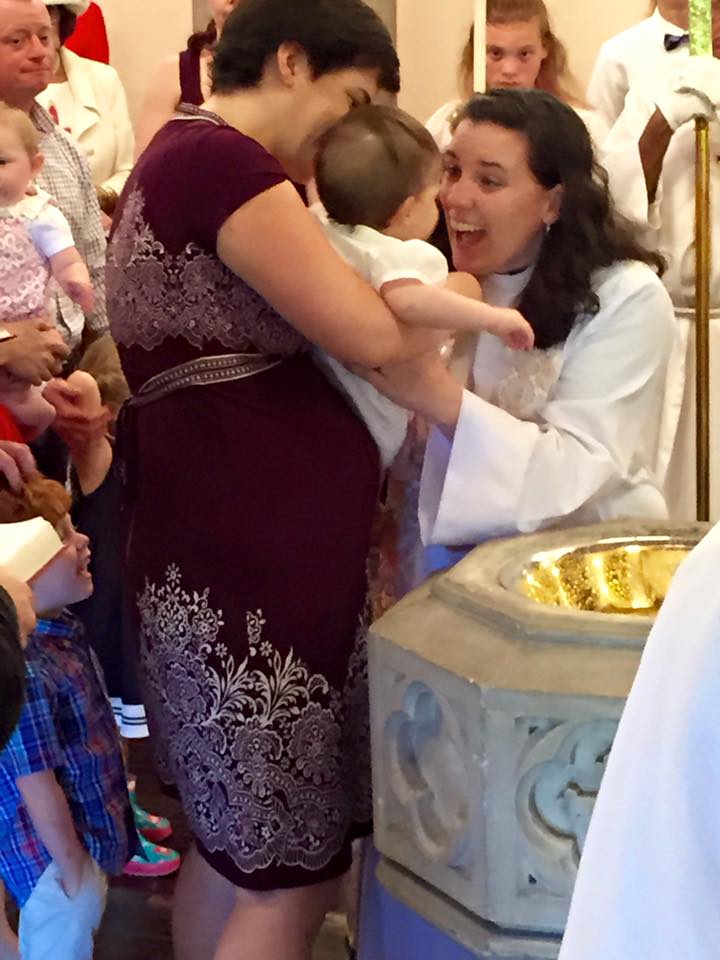 Baptizing my sister’s daughter brought us all closer to God.

My middle sister Kate now serves as the Director of Music at an Episcopal school close by, where I was asked to be the guest preacher last month. I introduced myself to a room full of skeptical teenagers, who seemed largely uninterested in my presence there. After a couple of moments of trying to warm them up, I finally said “and I’m Dr. Longo’s sister.” The room erupted with surprised gasps and laughter, and suddenly I had an audience that was infinitely more willing to hear me. It brought this oldest child so much joy to be the other sister, the one that was following where my sister had already led the way. I preached and she led music and in one of the sweeter moments of my life, we worked together to bring others to God.

When all is said and done, it doesn’t matter who’s first or who takes center stage. Andrew reminds us that we can all bring others closer to God – we just need to invite them along for the ride.