Truth: Most of what my kids know about Saint Nicholas they learned from Veggie Tales. We watched it years ago when  it was available on Prime Video and now it’s become an annual tradition thanks to YouTube. Go ahead, take a break, and enjoy it. There’s no shaming in this post.

Saint Nicholas was a remarkable person. He was born in the third century to wealthy Christian parents in what is now modern day Turkey. Nicholas’ parents died during his childhood, leaving him a hefty inheritance. Like so many of our own children, Nicholas wholeheartedly embraced Jesus’ command to visit the sick, feed the hungry, and clothe the naked. I often feel that my kids would give away all the food in our pantry if I wasn’t around. It always seems to be the adults in a household who remind kids that we only need to feed the hungry so much before it’s too much. Well, Nicholas’ parents weren’t around to stop him, and he gave away his entire inheritance to people who needed it.

As the story goes, Nicholas’ uncle was the Bishop of Myra and after noticing his nephew’s devout faith and generosity, he ordained Nicholas a priest. Years later, Nicholas returned home to Myra following a pilgrimage to the Holy Land, and learned that the bishop who succeeded his uncle had just died. Rather than assembling a nominating committee, publishing a profile of the diocese, and calling for applications and an election, the local priests gathered inside a church and decided that the first priest who walked though the doors would become the new bishop. And you guessed it, Nicholas was that priest.

This week we’ve had at least one toy catalog arrive in the mail per day. And each afternoon my kids grab them with one hand, armed with a sharpie in the other, ready to mark the dozens of things they need for Christmas (I realize this is not unlike my own behavior with the Sears catalog in 1987). I’m grateful the Church celebrates the Feast of Saint Nicholas December 6th, the date of his death, because it provides the perfect opportunity to reframe Christmas while there is still time to do so. So every year, just as the kids seem to be in too deep with their lengthy wish lists, Saint Nicholas’ feast day rolls around with the reminder that it’s in generous giving that we actually receive. 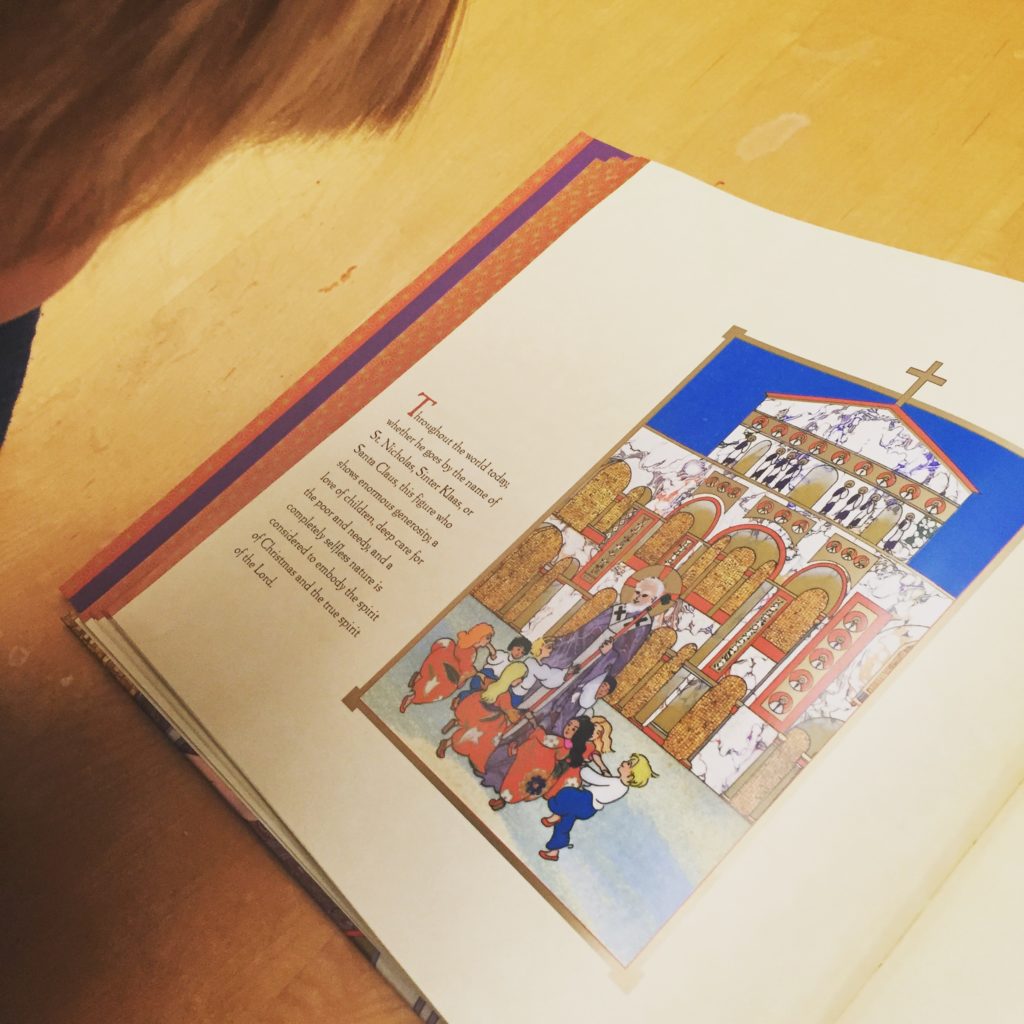 For the past six years, we’ve celebrated Saint Nicholas’ life through books, crafts, and a Veggie Tales movie. A couple years ago we added Saint Nick’s Nite  to our festivities, a wonderful liturgy for families offered by my husband’s church that includes a visit from Saint Nicholas himself. And for the past six years, I’ve seen behaviors change course on December 7th. It seems that calming stormy seas, resurrecting murdered seminarians, and halting a famine weren’t the only miracles Nicholas performed. I’m here to tell you, they continue to this day. 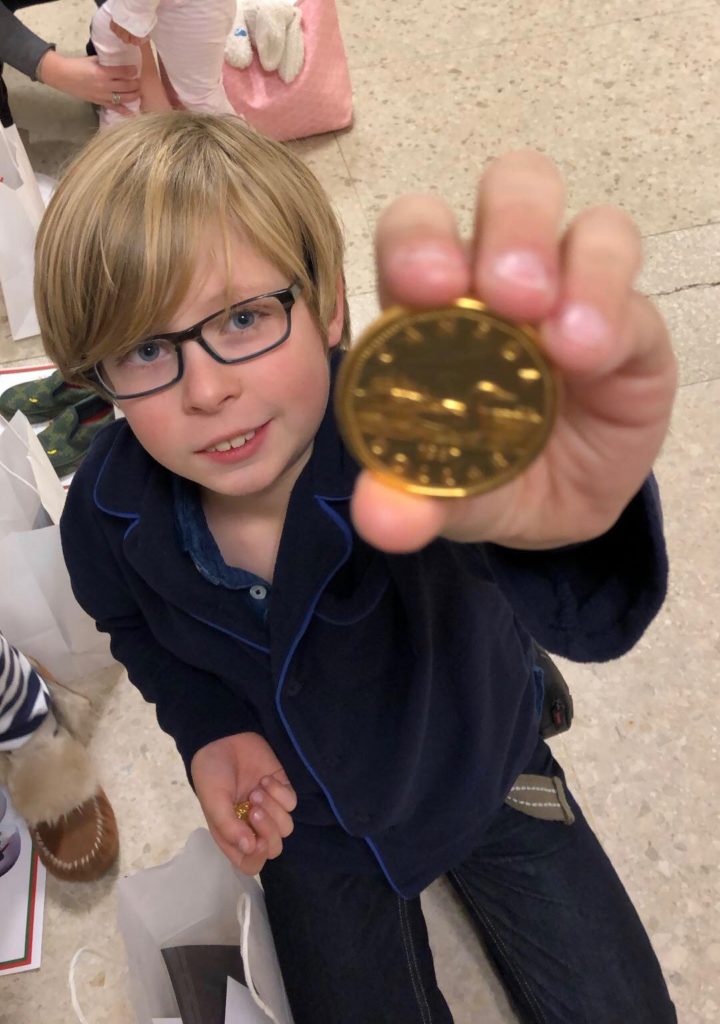 Showing off a chocolate coin Saint Nicholas left in his shoe last year.

I invite you today to talk about Saint Nicholas as a family. Spend some time on the Saint Nicholas Center website, discovering “the truth about Santa Claus.” There you can also print out crossword puzzles, word searches, coloring pages, and step by step drawing guides. You can drop an orange, apple or banana, chocolate coins or candy canes  in your children’s shoes tonight after they go to bed tonight, then talk about Saint Nicholas’ life of joyful giving over breakfast in the morning.

If you live near northern Virginia, Virginia Theological Seminary in Alexandria is currently hosting a Saint Nicholas Center exhibit. You can learn all about Nicholas’ story through educational and intriguing artifacts and hand-on activities. The exhibit is open Monday – Friday 8 am to 6 pm EST, and Saturdays 9 am to 2 pm through December 20, 2019, then again from January 2 – 6, 2020.

We’d love to hear how you celebrate Saint Nicholas and if you, too, see changed behavior among your children after talking about his life. Leave us a comment to let us know!