In honor of Star Wars Episode IX: The Rise of Skywalker (Common Sense Media says 11+) being the third movie of a third trilogy, I’m going to begin my review by sharing three of the possible introductions I brainstormed in the nine hours since I walked out of the theatre. I think that these three introductions will probably tell you all you want to know about what I think about the movie. This is a spoiler free post.

Introduction #1: At the beginning of the year, a research group called OpenAI created an Artificial Intelligence that wrote so well that they decided not to release its source code because of “safety and security concerns.” The AI had the ability to write almost-human-level prose after being given just a few “seed sentences” from a human being. Star Wars Episode IX: The Rise of Skywalker feels like it might be the product of such a program. It’s like if an AI had taken all that was knowable about the Star Wars canon and been told to write a movie that could wrap up what’s now being referred to as “The Skywalker Saga,” the nine numbered Star Wars films that began with Episode IV in 1977.

This is not a compliment…

Introduction #2: On the first day Disney+ (Disney’s new streaming service) released, my family got into an argument about what to watch first, so we watched Frozen. When everybody went to bed, I watched the first episode of The Mandalorian, the first-ever live-action Star Wars television show. When the credits were finished, I picked up my remote and I restarted it. I watched it three times in a row and then I did the same thing the next day. When I told people that this was how I responded to the first thirty-nine minutes of this new Star Wars IP, they wondered what was wrong with me. When I finally started putting words on the feeling I was having, I realized that the experience of watching The Mandalorian was causing me to look back on all the post-Lucas Star Wars films and realize that they had one thing in common: they’re all in such a hurry! It was so refreshing to watch a Star Wars thing take its time.

As I ponder my experience watching the newly-released Star Wars Episode IX: The Rise of Skywalker, I realize that modern Star Wars films’ need to cram as much as possible into a movie and move at a breakneck pace to get through it, is wearing me out and it’s making me long for the days of slower science fiction. Sure, the slower science fiction of the original trilogy (even the prequels) didn’t have near the level of zeitgeist-holding success and was slightly alienating to non-nerds, but Rise of Skywalker feels like the ultimate fever-dream incarnation of the more-more-more-more we expect out of modern science fiction. Here’s hoping that Star Trek: Picard is closer to its television roots than JJ Abrams’ Kelvin Timeline films. Maybe we should stop giving Abrams permission to speed up good, thoughtful science fiction. Until then, I thank God for The Mandalorian.

Introduction #3: In my adulthood I’ve become more aware of the way that my brain will sometimes pull a SAT vocabulary word as I’m explaining something. It’s usually a word I haven’t used in years, but it pops up because my brain thinks it’s probably the right one. But then I’ll panic, worried that my brain is short-circuiting or something, so I’ll look it up to see if it really means what I think it means.

In the closing moments of Star Wars Episode IX: The Rise of Skywalker, I kept thinking PERFUNCTORY. I looked it up to see if I could trust my lexical instincts: “(of an action or gesture) carried out with a minimum of effort or reflection.“ Phew,” I thought, “Thanks, Brain… that’s exactly what that was.”

But this is a review on a website devoted to Christian Education, so allow me to give you some further thoughts about how this… whatever it was… can be used in your work with young people.

The nine films of “The Skywalker Saga” have always been about the two-edged sword of Legacy and Destiny. The films are constantly asking a kind of nature-vs-nurture question of whether their (usually Skywalker-named) characters are who they are because of their familial relationships. Rise of Skywalker turns this question up to the max by bringing in a new bloodline and asking the audience to wonder: If the men of the Skywalker name have, to this point, been inherently good, light side, who are tempted in whole or in part to the dark side, what do you think might happen if a person from a different family of inherently evil, dark side, users were tempted to the light side? WOULDN’T THAT JUST BE SO INTERESTING? No, JJ, it turns out it’s not really.

I’m sorry, I told you I was going to focus on Christian Education.

I’ve been really impressed with this Advent’s curriculum from Illustrated Ministry “In Light and Darkness.” Based on Barbara Brown Taylor’s Learning to Walk in the Dark, it offers a series of meditations on how we do a disservice to God, to ourselves, and to our neighbors when we equate light with good and dark with bad. They are both of God and God exists wholly within them. Such a facile light and dark binary has been at the core of Star Wars since its inception and one of the reasons why Episode VIII: The Last Jedi was so incredible was because it gave us a hint of a more integrated non-binary future for The Force in Star Wars. But bowing to pressure from the worst parts of internet fandom, JJ Abrams reversed course, retconned the whole thing and now we have THIS.

Blargh! I did it again. Write about Christian Education, Funston!

There is this pretty cool moment in the climactic battle when the “thousands of generations” of Jedi that, Luke Skywalker tells Rey, “live in you” face off in her person against the thousands of generations of Sith (dark-siders) that live in her opponent. It feels like a Communion of Saints moment that will surely preach. There’s also a pretty cool juxtaposition visually and aurally when the generations of Jedi support Rey with just their voices, whereas the generations of Sith support their avatar with a sense of worship, a crowd of bobbing and chanting heads. We feel the support and prayers of the Communion of Saints not because they worship us, but because they have our backs.

I did it! I said something nice about the movie AND I tied in Christian Education!

Good thing I have The Mandalorian.

Wait… what? There’s only one episode left? 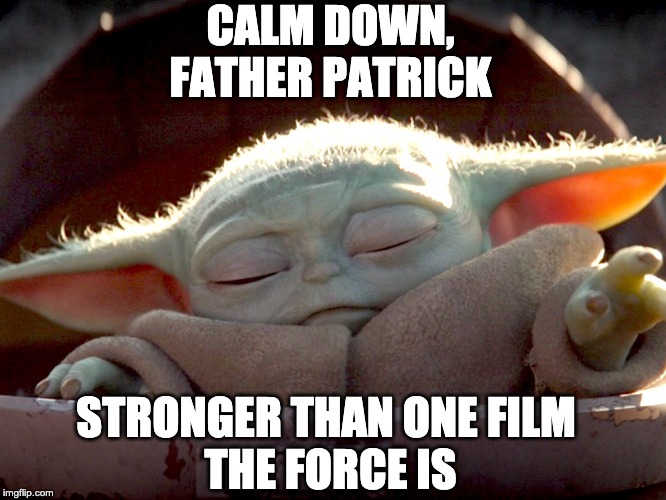