On this day, the Episcopal Church remembers Saint George, and I take some comfort in the complexity of his remembrance in Christian memory. He is the patron saint of England as well as Ethiopia and Georgia among others. We as spiritual descendants of the Church of England, see his continuing influence, as a large part of the Episcopal Church seal and flag consists of “Saint George’s shield,” a white shield emblazoned with a red cross.

George served in the Roman army as a high ranking officer. He died as a martyr for the faith in the early fourth century in Lydda, Palestine (now Lod, Israel). Much legendary material grew around his memory in the centuries following his death. It was said that he gave to the poor and “openly confessed Christianity before court.” And you may be familiar with the depiction of Saint George slaying a dragon. He was recognized as the patron saint of soldiers in the twelfth century, and crusaders called upon him for support during the Crusades. 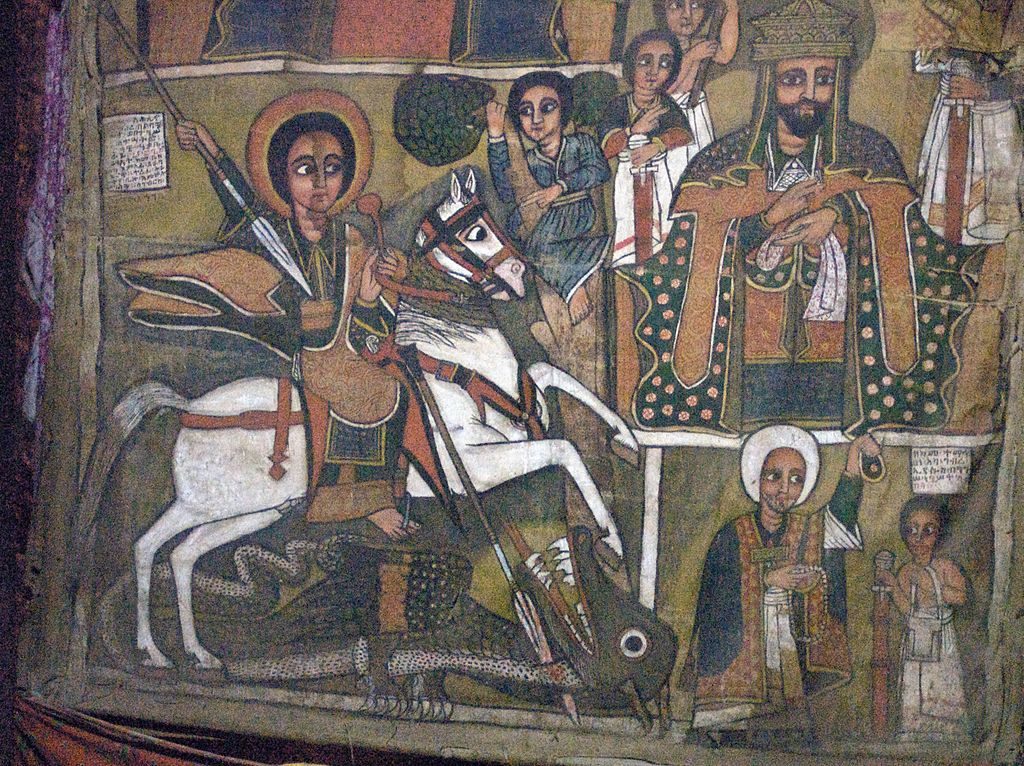 George’s memory is complicated. A follower of Jesus. A Roman officer. A symbol of faithfulness unto death for all believers, while also a symbol of strength for crusaders. A servant of the state, whose commitment to his faith resulted in his death by the state. His memory mirrors the complexity of life itself.

My son and I were recently on yet another walk during this time of physical distancing, and the conversation somehow turned to terrorists. More specifically, my son wanted to know about them. Even though we were on a sidewalk, the walk suddenly felt very precarious. Trying my best, I tried explaining how war has typically been fought between opposing forces of soldiers; each side made up of soldiers who fight other armed soldiers. Terrorists are different because they hurt and attack people who are not soldiers. We talked about 9/11 which he had learned about at school last fall. He said he understood.

Our conversation was hard, complicated and difficult to navigate. What is appropriate for his understanding at this time about such a complicated area of Christian ethics? I want to encourage my son’s desire to protect others. I know that at this stage of his life, good guys and bad guys are a helpful and appropriate distinctions for him. Later on, he will learn and be able to understand more of the complexity and limits of good guy/bad guy thinking and that there are additional lenses through which he must view life.

One such lens is our commitment to live into our baptisms as Christians. I have made a commitment to raise him in the faith and to help him grow in Christ. It isn’t easy. I want him to know the love of God for him and all people. I want him to know about the mercy, grace, and forgiveness that Jesus lived out and makes available to us, the one who turned the other cheek, walked the second mile, and ultimately gave himself for all people. Those are big ideas and take time to understand and grow into. They also require a lot of wrestling for each Christian as they come to understand how to live into the way of Jesus in their time.

Christians have had differing approaches to understanding military service and following Jesus throughout the Church’s history. Some of the Church’s greatest minds articulated both of these lenses into a coherent vision of following Jesus,  while other Christians claim they are incompatible. But how do you do that for your nine-year old son during a walk through the neighborhood?

Raising our children in the faith is complicated. I don’t have anywhere near all the answers, but I do know that we don’t do it alone.

This is one of my favorite prayers from Evening Prayer:

That we may be bound together by your Holy Spirit in the communion of [blessed George] and all your saints, entrusting one another and all our life to Christ,
We entreat you, O Lord.

Raising the children entrusted to us is complicated. But thankfully, we do it in communion with those, like George, who have gone before us and are familiar with complexity. Together with them, we entrust our children, one another, and all our life to Christ.

[Image Credit: A. Davey from Where I Live Now: Pacific Northwest / CC BY https://creativecommons.org/licenses/by/2.0)]