“…Since my baptism, the world has nothing at all to do with me. I don’t even want to know what’s going on out there…”

I heard these words from a friend last month and have been playing them over and over in my mind ever since. I knew what she meant. We are marked and sealed with the Holy Spirit at our baptism, set apart from the worldliness which enslaved us. The old Adam is removed, and we are a new creation. Protesting in our hometown, and the pandemic still lingering, I knew the semantics were off, and her words were folly.

Esther broke the law in going before the king without being asked, an act punishable by death. She carried out subsequent meetings designed to uncover for the king, the evil being plotted against a race of people. She did not have to do this, but she took these words to heart, “For if you keep silent at this time, relief and deliverance will rise for the Jews from another place, but you and your father’s house will perish.  And who knows whether you have not come to the kingdom for such a time as this?” (Esther 4.14). She stood up to the leader of the day; she stood with her fellow Israelites. Many others would help this race during the Holocaust. The words Betsie Ten Boom said about being imprisoned for opening her home as a hiding place, stun me as they stunned her sister Corrie, “what better way could there be to spend our lives? …if people can be taught to hate, they can be taught to love!” Betsie meant to finish her life openly winning her prison guards with love.

I am awake when I should be asleep, weighing this virus threatening my family and yours, and my elderly friends who long for the table of the Lord, and the implications of withholding it for fear of death. I am awake thinking of my son with his trademark Hispanic black hair, and skin so brown I lovingly tell him it looks just like chocolate ice cream, knowing that he may face injustice because of racism. I am thinking of my daughter, plagued by the same thing we all are these days, bombarded by social and news media who never tell the whole truth. The attempts we make to instruct teenagers fall short, and we wish as parents for rhetoric from leaders we could ask our children to respect.

What is going on in the world means something to me.

I read Micah 6:8, “Mankind, He has told you what is good and what it is the Lord requires of you: to act justly, love faithfulness [hesed in Hebrew], and walk humbly with your God,” and I remember Father Austin saying, “the Christian life is hard.” In the midst of the mess of the world, act when it’s easier to be still in the lies of apathy?  Choose joy, and love unconditionally?

I play the scene in my mind of Mary and Joseph when they made their pilgrimage for Passover, that year when Jesus was twelve and they accidentally left him behind. Jesus was astonished that his mother didn’t know where to find him, and Jesus asks why she didn’t know that he would be “about my Father’s house,” but what was he doing there but teaching truth? From that moment on we find the scriptures saying that Jesus healed, taught, prayed, and all his days, he was devoted to….the world.

Mary who had submitted to the Holy Spirit’s conception in her womb, Joseph giving up his honor to marry her because of the voice of the angel in his dream. All the things they knew of prophecy, and the people who left everything to follow their son. Am I to think that Mary, pondering all of this in her heart, simply said, “the world has nothing to do with me?” I can imagine that she had her ear to each movement of the enemy of God – the world who wanted her son dead. The world who began listening to her son only after their children were healed. Jesus loved, and spoke against the false teaching of the pharisees, and became angry when they used his father’s name for profit. Mary and Joseph watched this son they had been given, give his life for the sake of the world. 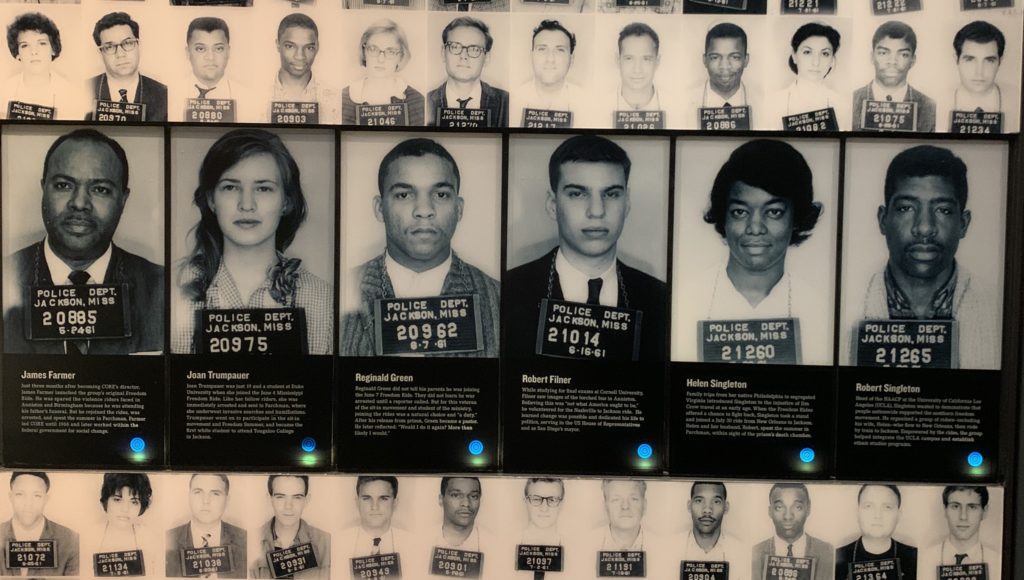 Freedom Riders arrested and sent to Parchman Prison in Mississippi.

In the face of everything which threatens the world God has created and given life to, our greatest delight ought to be walking humbly in it as a new creation loving and caring, because this is our privilege! It is when I stand in the National Civil Rights Museum, looking at a photo full of Freedom Riders and an accompanying quotation about their resolve within Parchman Prison that I make sense of the uneasiness with my friend’s words that I still feel.

“(The Freedom Riders) emerge from prison stronger and more committed than before. And for many of them, what began as a simple protest has been forged into a vocation, a commitment to freedom and justice that shapes the rest of their lives.” —James Farmer, Director of Congress of Racial Equality