The origin of one of my most beloved Ash Wednesday traditions can be traced back to Game 7 of the 1988 NBA finals between Isaiah Thomas’s Detroit Pistons, and Kareem Abdul-Jabbar and Magic Johnson’s Los Angeles Lakers. My grandmother and sister were pulling for the Lakers, but I was pulling for the Pistons, mostly because I am a fan of the underdog. After Isaiah Thomas injured his ankle in a rousing performance in Game 6, I was certain the Pistons were going to eke out a victory.

But as minutes gave way to seconds in the final game, the Lakers’ Bill Laimbeer nailed a three-pointer and ushered the Lakers’ into basketball history.

In frustration and anger, I blurted out a four-letter word or two about the Lakers. In doing so, I broke one of my grandmother’s cardinal rules: Never say a mean thing about yourself or anyone else. In a matter of seconds, my grandmother, the one who spoiled my sister and me endlessly, grabbed my hand and pulled me into her Pepto-Bismol colored bathroom. After briefly lathering up a washcloth with a fresh bar of Ivory soap, she took a quick swipe along the edge of my mouth as she “washed” the words from my mouth. I had never felt so betrayed in my life. (Actually, I probably had—but I had a proclivity for melodrama.)

When the soap cleansing was over—which to be honest probably wasn’t that long even if it felt like eternity—my grandma handed me a glass of milk, wrapped her arthritic arms around me and began rocking me on the edge of her bed. As tears streamed down my face—admittedly more from shame than contrition—she caressed my face with her hands, reassuring me of her love and forgiveness. Once I finished the glass of milk, she took my teary face into her hands and said to me: “Now, you know I love you, but you can’t go on talking like that. You aren’t meant for such foolishness. No one is. Baby, don’t you know?  You’re a child of God, and you’re made for glory, baby.”

At eight years old I couldn’t quite grasp the concept of glory. And to be honest, I am not entirely sure I grasp it today. However, I knew then just as I know now that my grandmother knew that no matter what we have done or what has been done to us, we are made from endless, unconditional, and fierce Love and designed to embrace and share such Love as though, whether we feel up to it or not. My grandmother also knew how it easy it was to forget that and was quick to remind me of it—although not always with soap. More than thirty years later, though, I still forget it. Instead of feasting on this truth, I overindulge in competition, to-do lists, roving achievements, harsh expectations, gossip, pride, and shame. Scripture and tradition call this sin. My favorite novelist Gail Godwin calls it “falling short of our totality.” My grandmother called it foolishness.

And its presence in our lives is never more clear than it is today. But so is God’s Love. The smear of ashes on our forehead is not simply a reminder of what we’ve done wrong. It’s an invitation to more fully inhabit our humanity, and, by extension, our integration into the story of Jesus’ life, death and resurrection—a story of glorious beauty in which God has fashioned human beings out of something as ordinary as dust that we might discover and embrace the image of the Divine in ourselves and each other. 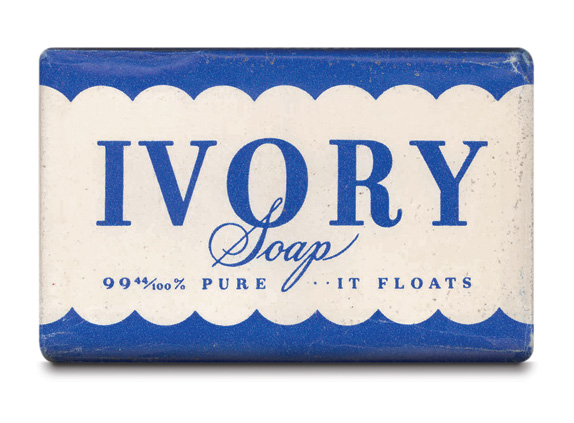 Now, every Ash Wednesday I trade my array of scented bath gels for a bar of plain Ivory soap. I don’t do it as an act of self-abasement or punishment. I do it to remind myself that underearth all the pretenses, masks, and self-preservation—that is, underneath the sin—I am beloved. I am forgiven. I—all of us—are meant for more than this world would suppose.

This year, as COVID-19, the relentlessness of systemic racism, and our extended separation from one another pierce us with daily reminders of our frailty and mortality, Ash Wednesday may feel a bit more tender—perhaps even redundant.

To me, however, that’s all the more reason to pick up a fresh bar of Ivory soap and lather ourselves in the promise of glory.

What practice can you adopt this season to help you draw closer to the God of love and mercy?