And they cast lots for them, and the lot fell on Matthias; and he was added to the eleven apostles. —Acts 1:26

‘Humility.’ We can use the word in such ugly ways, but humility simply means to be real, to be honest, to be ourselves. If you’re doing Lent, it’s a good Lenten word. It’s not self-loathing or other-loathing. It’s an invitation to get in touch with our earthy nature (you can hear its etymological resonance with humus, good dirt). We are limited, vulnerable—brilliant, resilient, and also finite, dependent on each other and this whole world. If we’ve decided that vulnerability or dirt is ‘unclean’ or ‘bad,’ that’s our mistake. Humus is good for growing things. We are made from humus, and we will one day return to it.

Matthias must have had humility in spades. Like many of the apostles, we know little about him, but what we do know is striking. After Judas Iscariot left the scene, the apostles needed a new member for the leadership—the number ‘12’ just resonates so well with Israel’s history—and they looked among their faithful number for a likely candidate. They narrow it to two, and cast lots to see who should get the job. This is the act that officially makes Matthias second fiddle to Judas Iscariot. Matthias probably feels like he can’t do worse than his predecessor, and like an impostor in a leadership club of cool kids. He’s never mentioned in scripture again.

Outside the Bible, tradition is also pretty scant on Matthias. There’s a charming text called The Acts of Andrew and Matthias in Cannibal City, where Matthias (once again) draws the short straw and is sent to evangelize a place literally called “Man-Eater City.” This goes about as well as you’d expect, and Matthias barely survives being blinded and fattened to become dinner when Andrew swoops in to provide aid through a series of miraculous events. The text turns out to be mostly about Andrew, not Matthias.

I think of Matthias, and I am reminded of humility. Matthias’s importance doesn’t come from anything about him—not his character, not his actions. He might have listened during Jesus’s classes, but he was apparently a second-round draft pick. He became important because of where he was standing when the chips fell. It’s his willingness to take a stand and a risk that sets him apart.

And yet, that was enough. Showing up to the discipleship coffee hours, and standing in one place rather than another while lots were thrown into the air, was enough to help spread Jesus’s message about God’s love for the world. Matthias was good humus, a good soil for growth, because he was ready, and he stood up when he had the chance. 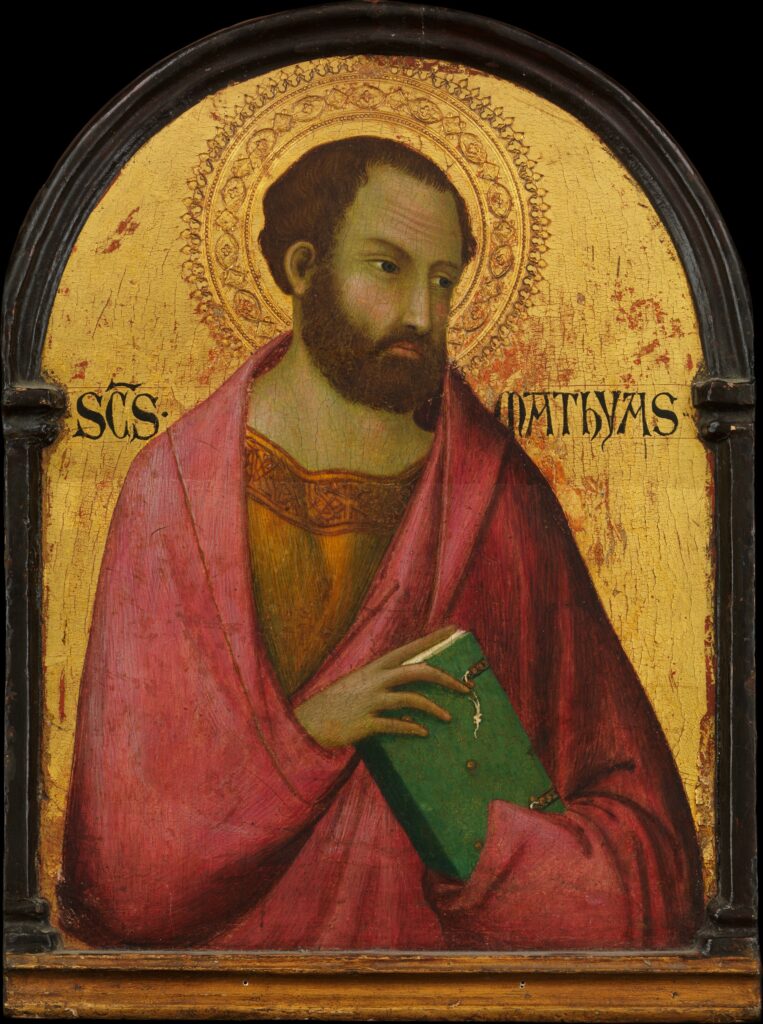 Saint Matthias. In traditional iconography, like here, a closed book indicates that it is the person’s life that will teach us.

We worry so much about whether we are good enough, or experienced enough, or old enough, or young enough. We’ve seen the leaders of the past fail. We’d rather go minister anywhere other than Cannibal City.

Yet, Matthias whispers to us, we don’t have to be anything other than good humus. We already are a good growth medium. We can prepare ourselves by showing up—to church, for another, in our own lives—and by standing when it’s time, and certainly with the chips are down. We only have to face Cannibal City when we have help. And God, that great sower of seeds, is an expert at loving and tending humus.