Once upon a time, I had a colleague who attended our school’s voluntary Eucharist service every Friday morning. She held it as her religious obligation. Unfortunately, she embraced it as an opportunity to exalt herself over others. She, also, used her attendance at Eucharist as a measure of her righteousness and for those who chose not to attend the service as a measure of their unrighteousness. Regrettably, people viewed her as a curmudgeon. They avoided her due to her short temper, judgmental attitude, and gossipy nature. If she liked you, then you avoided her wrath. However, if she didn’t like you, then you were constantly a target in her cross hairs. Students knew it. Faculty knew it. Parents knew it.

When I first read William Law’s A Serious Call to a Devout and Holy Life, I immediately could see my colleague as one of the characters in his famous treatise. Considered a spiritual masterpiece, A Serious Call published in 1729, stands the test of time and challenges Christians to participate in a common life centered on the precepts of the Gospel. On many levels, it provides a practical guide filled with examples of “characters” who both exemplify and fall short of living into Gospel principles.

William Law suffered for his beliefs. Because Christ stood alone as the center of his life, he refused to take the oath of allegiance to King George I. As a result, he was barred from serving in the church. Not to be deterred, he continued living out his deep conviction that God must be the center of our lives, even if it costs everything.

William Law integrated worship and prayer into all facets of life. He lived a life in which he prayed without ceasing, because all he did glorified God. He provided spiritual guidance and continued to write spiritual works until his death in 1761. He stressed, “If we are to follow Christ, then it must be our way of spending every day.” This was true not just how he spent his time, but also how he spent his money. Law gave abundantly, giving 90% of his income to the poor. 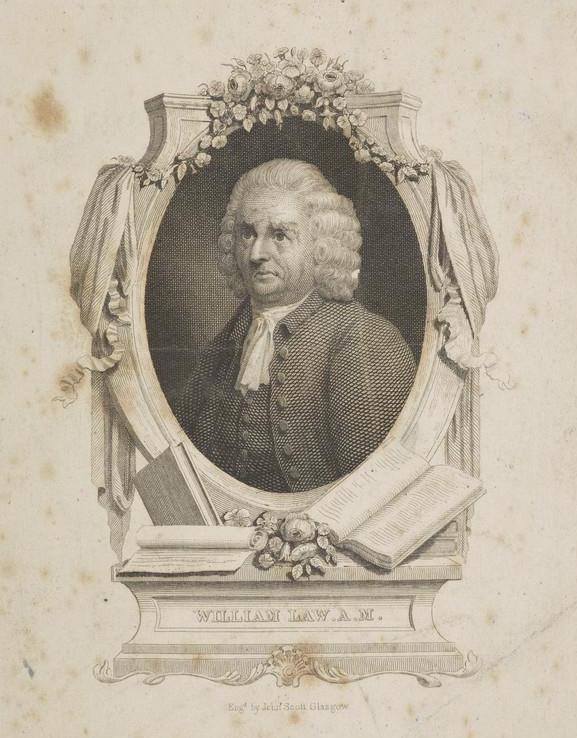 “Devotion is neither private nor public prayer; but prayers, whether private or public, are particular parts or instances of devotion. Devotion signifies a life given, or devoted, to God.”

These two sentences provide the scope of what it means to follow Christ. Basically, prayer should lead to service. For example, prayer, whether public or private, provides nourishment for a devout life, so we can live into our devotion by performing charitable acts promptly, diligently, and frequently. Prayer becomes nothing more than a facade, if we simply compartmentalize it and neglect to allow it to influence our whole life.

William Law maintains we manifest our love for God by loving our neighbor. He believed that attending corporate communion or entering into private prayers did not give us a license to act selfishly in other areas of our life. Prayer, whether public or private, is only one dimension of living a devoutly Christian life. He believed Christians fall short of a devout life not because of inadvertent exploits, but due to our feeble intentions. Consequently, he warned against developing a check box religion, in which a person says, “Church, check. Charitable donation, check. Prayer, check” only to pursue a secular existence.

William Law focuses on the common life, the common life in which our ordinary actions reflect the charitable actions of our Lord and Savior. We must follow Jesus by feeding the poor, reaching out to the marginalized, housing the homeless, exalting the oppressed, and breaking down the barriers society has created to divide people. That is our common life, which according to William Law may be more important than our common prayer. Afterall common prayer without a common life becomes a trivial reality.

In essence, the substance of Christian prayer is Christ like action; and the substance of Christ like action is Christian prayer. For Christians, this integration of prayer and action becomes our common life in which we direct our intentions to serve, honor, and glorify God in all facets of our life. William Law reminds Christians to direct our intention to glorify God in our work and our play, our going out and our coming in, our resting and our waking.

Sadly, my colleague failed to integrate prayer and action. Perhaps she viewed prayer,  both public and private, as its own end. However, William Law’s serious call to a devout life raises the bar for all of us. Jesus, too, set the bar high, and paid the ultimate sacrifice. So, William Law captures the essence of the Christian life best, when he reminds us, “If we are to follow Christ, then it must be our common way of spending every day.”