Lolo had volleyball practice last night from 5-7 p.m. just like every other Tuesday and Thursday since March when this masked season hesitantly started. It’s a 25-minute commute to the facility so I usually wait in the parking lot for two hours and enjoy the solitude. Yesterday I dropped Lolo off, went to Aldi for a bag of rice, and came back.

The gym is not situated on the lot in a way that’s conducive to carpooling or mass arrivals and departures. There’s one square lot with a grid of standard double rows on one side of the building and a long single row of spaces bordering a grassy knoll on the other. There’s no drop-off loop or traffic flow signage. Back from Aldi, I survey the almost empty lot and head toward the single row of spaces on the side and strategically back in for an easier exit.

I notice cottonwood seeds blowing around but decide to open all the windows anyway as the weather is delightful. I turn off the engine and settle in with a book. Fifteen minutes later a gruff, gargling pickup backs in very close to my passenger door. Then a sedan pulls in on my left—windows up and engine idling. I try not to think of it as wasteful and reckless.

Around 6:40pm, cars start coming down the lane—not to park, but to turn around behind the building and idle alongside the gym for player pickup and a quick getaway. This leaves room for only one shared lane with vehicles coming and going on a collision course. Not to mention that tired, hungry kids bursting from the doors have to navigate a path somewhat like pixelated frogs crossing the road in an 80’s Atari game.

Only a car’s width of space separates me from the curbside idlers so I have an unavoidable view into a vehicle whose driver passes the time by swiping phone notifications. With pinkie up and great flourish she taps and taps away, seemingly delivering whimsical satisfaction to every pink nail of her manicured fingers. Two things rise equally within me: disdain and a “High Noon” sense of impending doom as we get closer and closer to 7:00pm. Players whose responsible parents have parked will have to cross in front of these curbside narcissists.

The cottonwood fluff continues its sideways drift as if the whole property was inside a tipped snow globe. 6:57pm. The pink-nail driver reaches into the back seat for a two-liter bottle of Ruby Red Squirt and takes a big swig. Do I like her more or less now? I’m not quite sure. I watch the stream of seeds flow past the green roof backdrop and a spiritual valve opens from a forgotten place. A rush of peace finds me, accompanied by words from the gospel reading of last Wednesday’s online Evening Prayer: “. . . all that is mine is yours. But we had to . . . rejoice because this brother . . . was dead and has come to life.”

The Holy Spirit has this knack for using memory to apply the occasional gut-punch truth. Packed into that text are not only teachings of the whole prodigal son story but also an affirmation that Jesus’ love and wisdom are accessible to me now. Also in that Luke 15 passage is a call for me to extend mercy—a mercy that I too often require, a mercy that is by definition love undeserved. 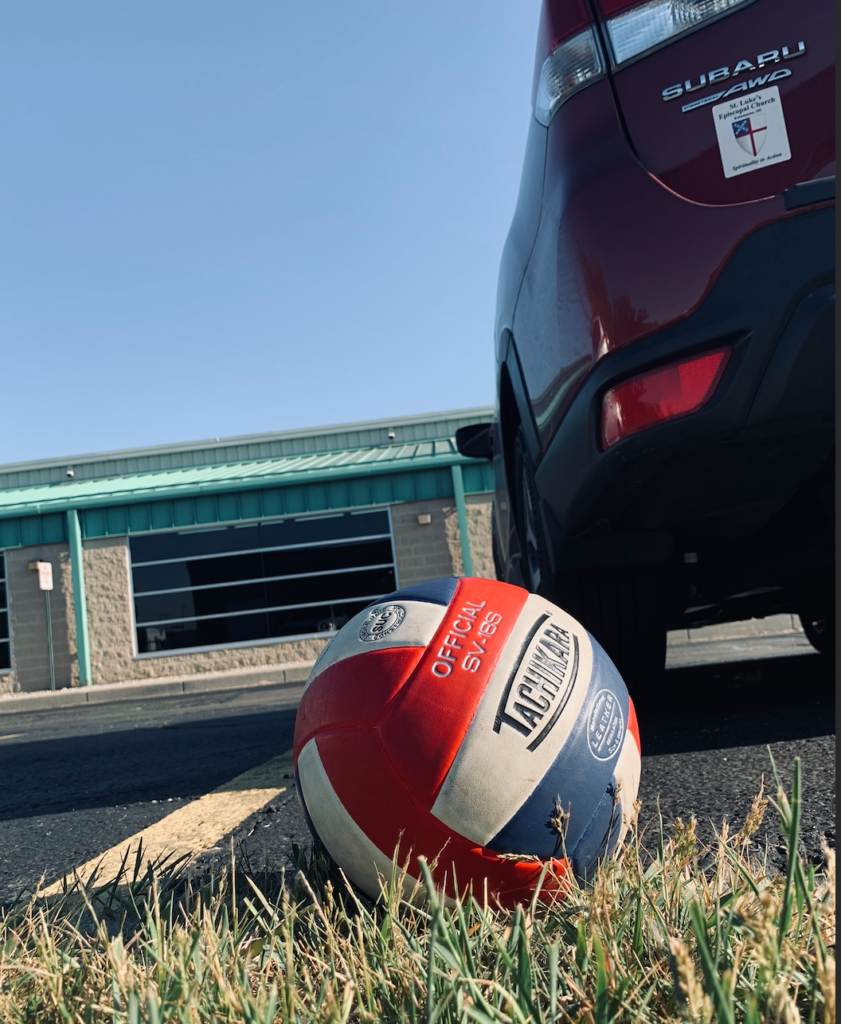 When Lolo exits the gym, several curbside vehicles have already left. Pulling out requires a three-point turn to get around the pickup, but it’s fine. Then, just as I am almost free of that tight single lane, an even bigger pickup comes from the other direction. Our cars are grill to grill in a standoff; cowboys in a dusty ghost town. I throw up my arms in disgust. He’s shouting at me to back into the space I just worked so hard to get out of so he can get through. He demands that I reverse even though there’s no one behind him. I don’t want to give in to this chump. But I do want dinner. I back up and let him pass but not without a mom-look and a comment to two witnesses in a curbside minivan as I saddle up beside them for another three point turn. “It’s not just me, right? He’s being a complete jerk?” They shake their heads slowly in solidarity, squinting in the golden light of the western sky saying, “Just so rude, so rude!”

Had prayer not washed over me moments before and given me that peace, what would I have done in that confrontation? We’ll never know. For that we say: alleluia, alleluia, yeehaw.

In what unconventional situations have you offered prayers this week?