I grew up in Montgomery, AL, but through the mind’s eye of a child and even an adolescent, I missed much of what was around me in those first 18 years. Because of my whiteness, I was able to live rather disassociated from the reality of what the earth around me had seen, the ways people had, generation after generation, abused the very Black people who sat beside me, my neighbors, people in my most immediate community. I like many have begun, far later than I have an excuse for, to reckon with the history of what I once called home.

For months after the murder of George Floyd at the hands of the police, I read article after article, and books, and other resources, because I thought that was one way forward into the work I knew I was being called to do. I don’t regret any of the intellectual pursuits I have engaged in, as awareness and a greater knowledge of history are important. That said, finishing a book never quite feels like an accomplishment, because the turning of its pages don’t ever seem to lead me into a place where I feel like I have really done anything to help the quality of life for the Black people who currently sit beside me, are my neighbors, the people in my most immediate community.

When I listen to the story of Jonathan Myrick Daniels, I am reminded of why my work has to exist outside of pages.  Daniels was a seminarian from the north, but inspired by Martin Luther King, Jr., he moved to Alabama to join the civil rights movement, due to the conviction of his Christian faith. As a seminarian, there’s no doubt he was immersed in studying, but his studies took him outside of his classroom, outside of even the seminary community, and all the way down to Alabama to participate in activism around voting rights. He entered Alabama with the intention to just do one march, but went back to seminary to ask to go back to Alabama, to give his time and energy into the civil rights work that felt integral to his calling to serve Christ. Months later, a man threatened Daniels while he was with a young Black woman, Ruby Sales, and Daniels received a bullet meant for her. 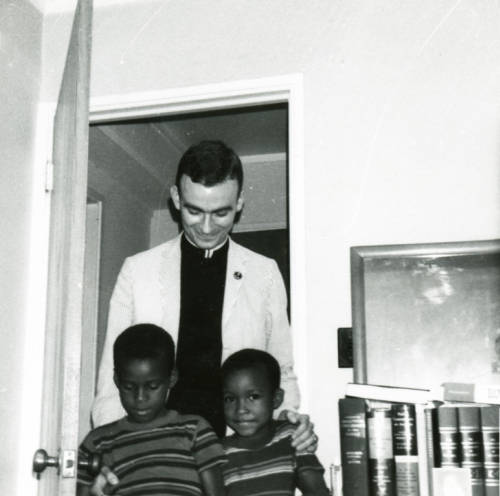 Instead of intellectual pursuits, there are incarnate life or death ways in which we can, as the Church, change the lives of those around us, especially people of color. I trust they may look less like reading and more like being so involved in the communities we seek to serve that we face the problems they face every day—problems like possibly being shot by hostile white men who are fueled by hatred. Daniels’ ministry was so deeply connected to the pain and risk of what it means to be hated by people just because of your race that it cost him his life. To honor the feast day of Jonathan Myrick Daniels, I feel called to ask the Holy Spirit how my life might be better risked for the gospel.

[Image Credit: This photo was taken in the Spring of 1965 in Alonzo West’s home in Selma where Jonathan Daniels stayed during his initial visit to Alabama. The photo belongs to the Virginia Military Institute’s Archives Digital Collection and used with permission.