One of my favorite parenting joys is reading to and with our children. The power of stories to teach, encourage, arouse curiosity, and instill faith never ceases to amaze me. As our children get older, the stories become more complex. A few years ago, most of the narratives were simple, linear, and consisted of only a few characters. Now we are delving into more complicated plots, personalities, and perspectives.

Today is the feast of Saint Philip and Saint James, apostles with ambiguous storylines and confusingly common names. We celebrate them on a combined feast day because, even though they died at different times and in different locations, their bodies were moved and are buried together in the Church of the Twelve Apostles in Rome.

Philip appears in several important moments of Jesus’ ministry. Jesus calls Philip to follow him shortly after calling Andrew and Peter, and Philip responds by telling his friend Nathanael. Philip convinces Nathanael to ‘come and see’ Jesus even though the skeptical Nathanael isn’t sure anything good can come out of Nazareth.

In the Gospel of John’s account of feeding the crowd of 5,000, Jesus asks Philip, ‘how are we to buy bread, so that these people may eat?’ And Philip’s practical response about a monetary value sets the table for the feeding of the multitude with the bread and fish. A few chapters later, Philip converses with ‘some Greeks’ who want to see Jesus and then at the last supper Philip asks to see the Father in order to be satisfied.

Philip the Apostle is easy to confuse with Philip the Evangelist, who is one of the seven appointed as deacons in Acts 6, and who teaches the Ethiopian eunuch about Jesus a few chapters later. One of the fun challenges of the New Testament is figuring out who shares the same name with other followers of Jesus, or a game I like to call, “now which Mary is this?”

Today is not only about Saint Philip though, we must also remember Saint James, often called James the Less. This moniker helps distinguish him from James the brother of John, who together are known as the sons of Zebedee, and from James ‘the brother of our Lord.’  Little is known about the James whom we celebrate today. He is called the son of Alphaeus, and he might have been with his mother (another Mary!) and the other women watching the crucifixion from a distance.

The character, identity, and intrigue of these two apostles are rooted in their relationship to Jesus. They are counted among the twelve which means they are participants in all the stories about Jesus’ teaching, healing, and his resurrection appearances we read about in the gospels. 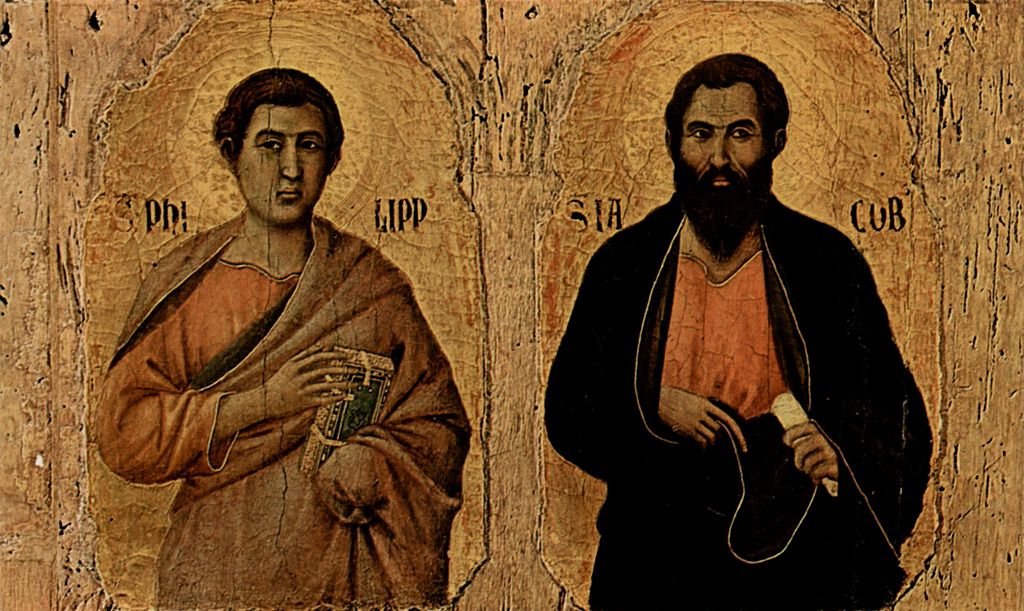 The gospel lesson appointed for today contains two important ‘I am’ statements from Jesus. ‘I am the way, the truth, and the life’ and ‘I am in the Father and the Father is in me.’ Jesus teaches Philip that God the Father dwells within God’s Son Jesus, and Jesus the Son dwells in God the Father. He goes on to say that those who believe in Jesus will do even greater works than Jesus did. As Christians we believe that Christ dwells in us, and we in him.

The apostles Philip and James invite us to both come and to see Jesus. They encourage us to bring to Jesus those who are skeptics and those who seek to know more about our Lord. They ask the difficult questions for us about the meaning of our faith and how we are able to satisfy it.

God’s story continues with us. We, too, are complicated characters with disparate back stories, working for the common goal of God’s Kingdom. Today on this shared feast day, give thanks for Saint Philip and Saint James, for their life, example, and their commitment to follow Jesus. You might read the lessons appointed for today and discuss the many ways Christ dwells within each member of your household.  Help them to find their own place in God’s story.