Summer mornings going to work, well, are pretty much the same as winter mornings but warmer—the getting in the car, turning on the ignition, adjusting my sunglasses in preparation for greeting the rising sun. In the summer, I usually walk happily to my car knowing that others are enjoying their vacations and time at the pool or the beach. My August vacation would be forthcoming.

On this summer morning, I was greeted by something different. As I approached my car, I looked through the back passenger side window and saw with clarity the inside of the vehicle. The backseat was filled with stuff from my storage unit—the clothes, the books, the suitcase. For a moment, I wondered how I had forgotten to put up the back window. Then I saw the broken glass just barely attached to the door’s window frame. It was a break in. Someone broke into my car. Quickly, I took stock of what was missing. I checked the glove box. I called the police.

“Do you want to file a report?”

Two hours later I gave up waiting for the police to arrive; they had better things to do like real emergencies. I would have to go in-person to make a report even though driving my car on the freeway with an open window wasn’t ideal. I took pictures, spoke to the insurance company, learned my deductible was $1000.00. It was a long day.

And why a record player? That week I was getting ready for Vacation Bible School and retrieved my daughter’s turntable from the storage unit. I thought the VBS children and youth would like to see a record player, listen to the sound of a vinyl record being played and marvel at the uniqueness of the spinning black disk with a needle. I am all about nostalgia, and was going to play the album, “The Sound of Music.”  Unfortunately, this VBS activity was not to take place. And like Les Misérables, someone else had something else in mind for my property. Not two silver candlesticks but a dark blue turntable case mashed between white Styrofoam with the cables missing. I had no idea where the cords were put in our move. The thief would need to go to Best Buy or make a purchase on Amazon to get the thing running. Life is full of surprises on both ends! 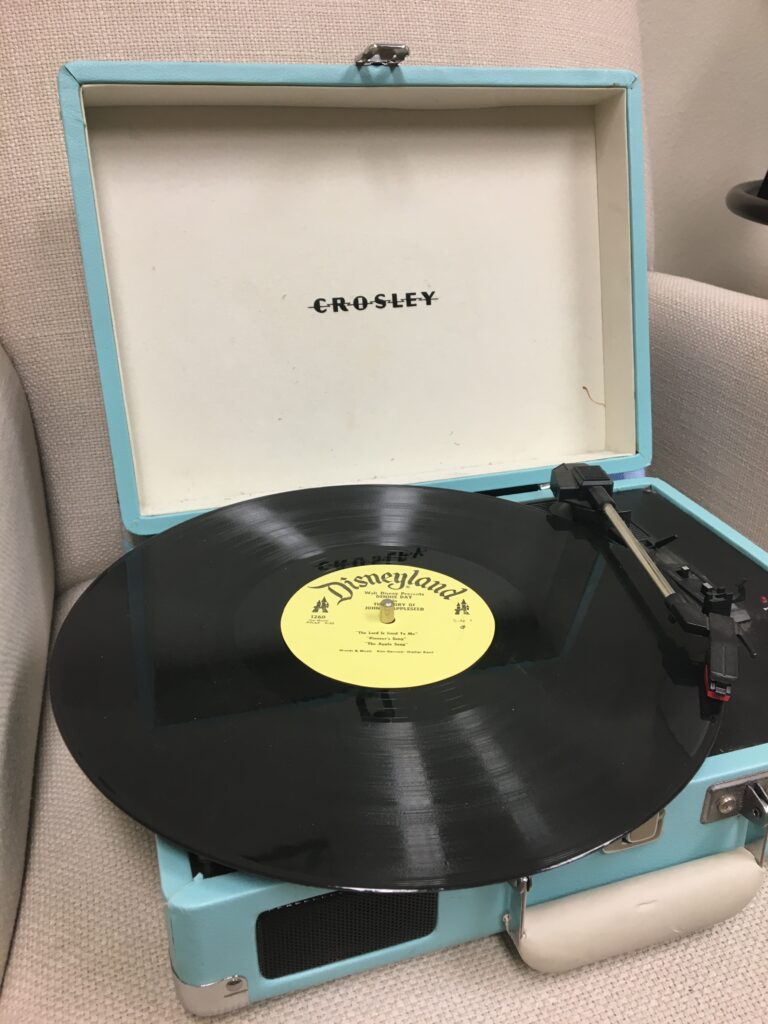 The next few weeks were a series of misfortunate events. I waited for the window replacement then found out there was a broken regulator, the inside mechanism that pushes the window up. Another week gone. I had to go to the Hyundai Dealer for the order of a specialized part. Chatting with the service mechanics, I spoke to them of my misfortune and asked why my car alarm didn’t go off. I learned about inside sensors and car alarms. And then came the time to go home without my car.

I have this anxiety about Uber and Lyft; preferring not to be driven in cars by people I do not know. It harkens back to thirty-five years earlier when a friend of a friend took unknown farm roads as a shortcut to the Green Bay airport. While the driver turned out to be a nice enough man, the experience of being confined in a car with someone I did not know while surrounded by nothing, but fields was hugely disconcerting to me and made a lasting impression. Not knowing my history, the Hyundai serviceman called Lyft to give me a ride home which I promptly and politely declined.

I would walk to the Enterprise Rent a Car ten blocks away. The California summer morning was beginning to heat up and I didn’t have a hat. As I stepped outside, the moment I looked up, the city bus pulled up. With joy and delight I ran forward. It was Elijah’s Chariot! I had my mask so I could ride. What was the cost? $2.00. I had only two dollars cash in my wallet along with plenty of credit cards. With tears of joy, I asked the driver if the bus stopped near the Enterprise Rent a Car.

I felt crying, because deep down, I felt God’s mercy when it was needed most. God provided a means of transportation — public transportation — at just the right time. And greater still, a complete stranger showed me kindness toward which felt redemptive after having had my car broken into by another stranger.

“Don’t worry, this bus will take you right to the front. Don’t worry. I got you.”

I told her that she was an angel. Her kindness meant the world to me.  She put her hand to her heart and her eyes smiled above her blue mask. I thanked her again.

Feeling somewhat embarrassed that I was making a scene while others waited to board the bus, I walked quickly down the aisle and plopped down in a seat. The man in front of me smiled and said, “Good Morning”.  As I tried to smile back, I thought to myself, if he only knew.