Editor’s Note: Today’s post is originally appeared on Storymakers NYC and is shared today with permission. At the bottom of the linked page you’ll find a beautiful free lesson download to use at home tonight. Happy Saint Augustine Day! —Allison, ed

“There is no saint without a past, no sinner without a future.”
― Saint Augustine of Hippo

Our story today is about a man named Augustine, who did many things he was not supposed to do, just like all of us. YET… God worked through Augustine and his words to change the lives of many people, just like God works in our lives.

All humans if they are honest would say yes and Saint Augustine, who we remember on August 28th, is no different. Let’s get into the story…

Saint Augustine of Hippo was born in 354 in Thagaste, a city in what is now called Algeria. His mother, Monica, was a member of the Berbers, an ethnic group native to North Africa, and was a devout Christian. When he was eleven, Augustine went off to school with other boys his age. It was there that Augustine did something he was not allowed to he stole some fruit and later when he wrote about it, he said that it was because he was not allowed to. He wanted to steal the fruit not because he was hungry, but just because it was against the rules. 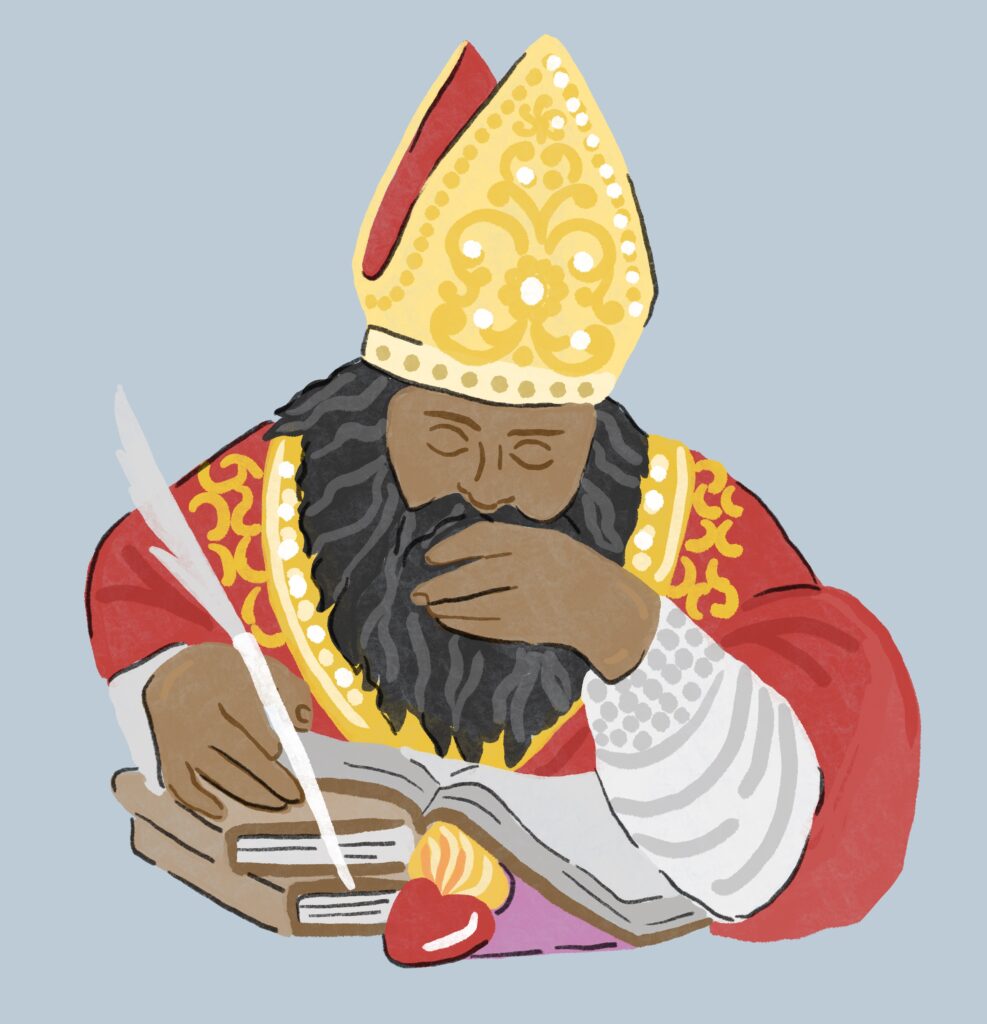 THE BIBLE TELLS US THAT HAPPENS TO US TOO.

Augustine made many more bad decisions that hurt a lot of people, especially himself. But, when he was teaching rhetoric in Milan, he met a man named Ambrose, the bishop of Milan, who taught him about Jesus and how he died for all the brokenness, bad decisions, and rule-breaking in the world. It was the story of Jesus’ ability to forgive him that changed everything.

Then one day, Augustine heard the voice of a small child saying,

“Take up and read.” He picked up Paul’s letter to the Romans and read “Let us clothe ourselves in Jesus.”

After that day, Augustine studied scripture and wanted to know more about how God forgives humans all the time. He was soooo inspired that he wrote many important books, including Confessions, the story of how throughout his life, good and bad, God was telling a story of love and mercy. You see Augustine came into contact with something that changed his whole life, forgiveness.

WHY DOES SAINT AUGUSTINE MATTER?

Saint Augustine reminds all of us, even grown-ups, that we can come to God with our heavy hearts, be heard, forgiven, and covered by Jesus. It is important for us to remember God is at work. No matter how we may feel or see ourselves, God is always pouring mercy upon us. Each account of God forgiving us today and StoryMakers of the past reminds us of God’s superpower to take on all the hurt and pain no matter how big or small it may seem. Also, did you know we are ALL saints? That is right you don’t need to be fancy or well known to be a saint, we are all saints because we are known and covered by Jesus.

Ask your StoryMakers to take a moment to pray to God in thanksgiving of forgiveness or take the moment to confess anything that may be weighing on their hearts.

Saint Augustine is from a place where the BEST textiles in the world are made… like rugs and so much more. With your StoryMakers create your very own loom and learn an ancient art form people from all over the world use to create beautiful textiles. You’ll need: square cardboard, two craft sticks, scissors, yarn, and imagination.