It is a sad historical irony that the religion we built as a response to someone whose second commandment is “Love one another as I have loved you” has, over the centuries, divided us violently, often to the point of killing each other. When secular interests use divisive religious beliefs as political tools, the irony becomes more bitter, since Jesus asks us to follow him in the face of secular power.

Today, the Episcopal Church honors three women, Margaret Clitherow, Margaret Ward, and Anne Line, who lost their lives because they refused to submit to anti-Catholic laws based in international power politics wrapped up in religious division. These women were all living comparatively pleasant lives —Ward served a woman of rank; Clitherow was the daughter of a successful tradesman; and Line was the granddaughter of a member of parliament. They were willing to disrupt their comfort and security and eventually die to save lives and to worship God as they believed they should.

For much of the sixteenth century, it was illegal to be a Roman Catholic priest in England. The Protestant Reformation began in 1518, and throughout Europe, Protestants and Catholics became set against one another. In 1558, following in her father, Henry VIII’s footsteps, Queen Elizabeth I declared herself Supreme Governor of the Church of England, for which the Pope excommunicated her – all as part of a tug-of-war for power between the Pope and the monarchy that had been going on for centuries. Eventually, as the Pope demanded that Catholics resist Elizabeth, Elizabeth stepped up the state’s persecution of Catholics in England. As a result, Catholic priests had to either hide or leave the country. 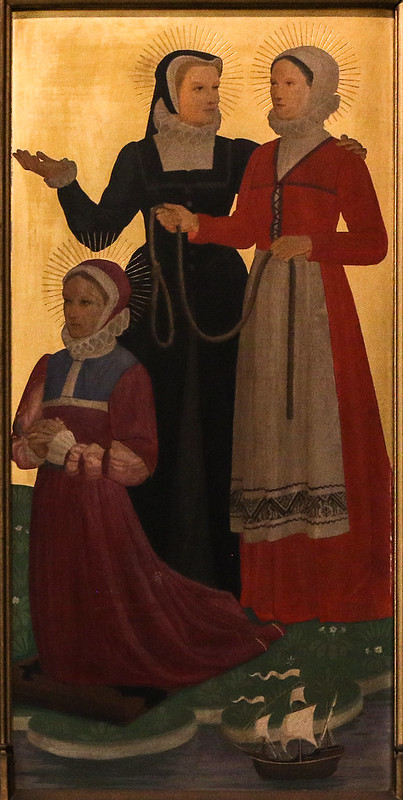 Clitherow, Ward, and Line were each convicted of hiding Roman Catholic priests during this time and executed for doing so. Ward visited a priest in jail, lulled the guards into complacency, and smuggled in a rope for him to climb out of prison. Under torture, she refused to tell where the priest had gone. Clitherow secretly opened her home and grounds to several priests for living and celebrating mass, and when her secret came out, she condemned herself by refusing to speak on her own behalf to protect her children from being tortured into testifying against her. Line successfully protected a priest from arrest and got him safely away but was caught herself. When she was brought to court, so ill she had to be carried in, she testified that she only regretted that she “could not receive a thousand more” priests.

These women were heroic. Their courage, devotion, and cleverness on behalf of persecuted people remains a model for us centuries later. And they died because the Church of England of their time – our religious forebears — persecuted them due to religious differences and power politics. For these reasons, the collect for today in the Book of Common Prayer asks God to forgive the church’s sins as we remember these women.

The religious differences dividing Christians in the sixteenth century were important then. They remain important today. We can find the differences between us so important that we will die, as Margaret, Margaret, and Anne did, rather than stand behind policies we believe to be wrong. But when our religious divisions lead us to hate one another, to find excuses to oppress one another – in those moments, we cease to follow Christ, who said that the second commandment, to love one another, was like the first: loving God above all else.

In what ways do we feel justified in our hatred for those who disagree with us?

How do powerful people and organizations utilize our religious divisions as tools in their struggles for dominance?

How do we oppress one another in the name of Christ?

Let us remember our answers to these questions as we pray the collect of the day and honor Margaret Clitherow, Margaret Ward, and Anne Line.

[Photo taken  by Fr Lawrence Lew, O.P. of the English Martyrs triptych by Geoffrey Webb in the church of St James, Spanish Place in London]