There are a lot of great quotations attributed to people who are not responsible for them.

There’s that fabulous poem about the planting of seeds and being “prophets of a future not our own” that people say is Oscar Romero, but was actually someone named Ken Untener from Saginaw, Michigan (it was written in honor of Romero).

One of my other favorite misattributions is to Teresa of Avila, whom we celebrate today.

It’s beautiful to think about closeness with God and each other in this way. We, together, are the Body of Christ. It is up to us to share God’s love, both materially and spiritually, with those we meet. As someone who is drawn to the charity and justice-oriented parts of our faith, the moral imperative is attractive.

I like this idea, but it’s got little to do with Teresa. According to Mary Luti, author ofTeresa of Avila’s Way, it was actually a 19th century Methodist named Guy Piece who wrote the first part. The rest was added a few years later by an English Quaker named Sarah Eliza Rowntree. It’s found nowhere in any of Teresa’s own writing.

Teresa did believe in service, and she did believe in ecstatic, intimacy with God. Her gift as a nun was as a reformer and as a mystic; stories say that she became so close to God that she would actually levitate when she prayed. This embarrassed her to the point of insisting that her sisters in the convent hold her down so she wouldn’t draw attention to herself. She had no trouble raising her voice, however. 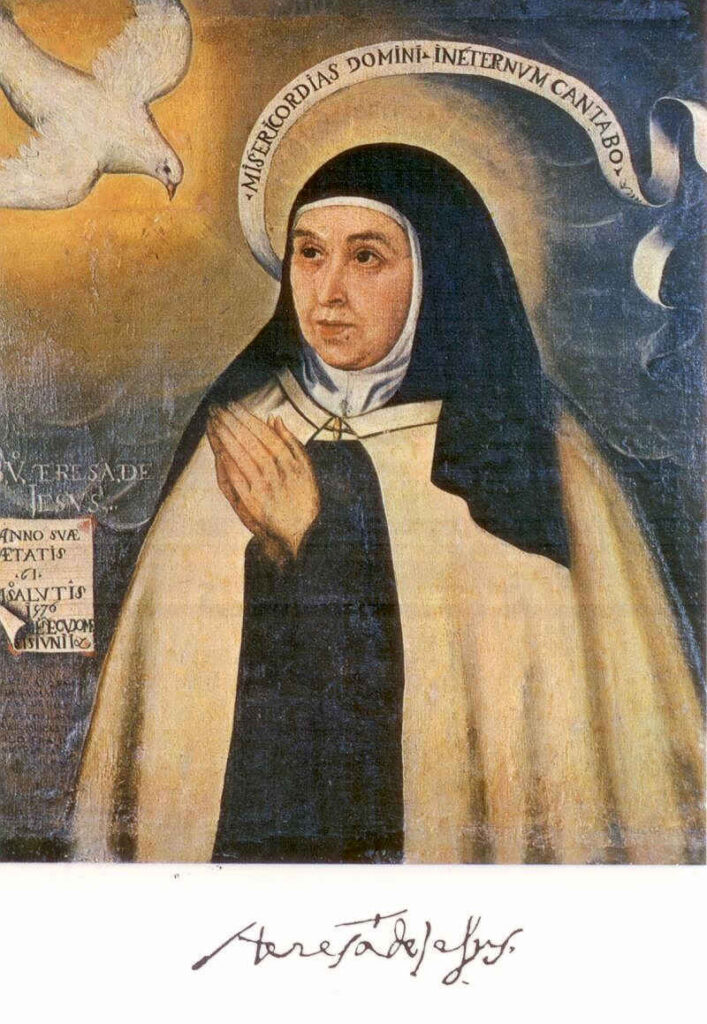 Teresa’s own family really did not see the depth of her vocation coming. She was sent to the convent at 16 because she was so badly behaved at home, and she settled in eventually. One issue was that life at the convent wasn’t actually that different from life “on the outside.” She would go on to be known for her spirituality and work as a reformer, trying to help her sisters find the structure and support for their love of God.

Being Christ’s compassionate eyes is a lovely sentiment, but there’s no transformation there for me, or for our world. If my hands are Christ’s only hands, then God is limited by my failure. That won’t help. Fallible and crabby as I am, I need to be reminded of the power of a God that is bigger and beyond my own vulnerability and pain. Maybe paradoxically, too, I find that being assured of God’s abundance makes me even more willing to extend myself for others, not less.

Much more comforting is this prayer of hers, which I highly recommend hearing sung by the community at Taize.

Let nothing disturb you, nothing surprise you,
whoever holds onto God lacks nothing;
God alone is enough.

God alone is enough, today, tomorrow, and always—whether or not I myself have anything to contribute.