As if on cue, every second Sunday of Advent my husband and I get into an argument about the correct type of lights to hang in order to welcome baby Jesus, the incarnate God, into the world.

In all honesty, Emmanuel was never mentioned once, but we did invoke every other weighty aspect of the season, most notably my slightly whiny ace card— “But Christmas isn’t Christmas without incandescent colored lights! It just doesn’t feel right!”

For those of you ready to jump into this argument with us, he is Team LED and  I am Team Incandescent or LED Which Looks Incandescent.

In my family growing up, we were a ‘get the tree and decorate it about two days before Christmas’ kind of crew, but also because we lived in a small city apartment, and having a tree hanging out for a month was

I carried this tradition into our suburban, married, and now child-ridden, life. And every year, we seem to push our tree accumulating and trimming earlier into Advent—Christmas jingle edging out Advent blue.

And now, in a final blow to my self-righteous former self who opined about patiently waiting for Christmas during Advent, we are more likely to celebrate the Week of Peace by enjoying our annual row about the lights.

Did you plug them in before you put them up?

Which bulb is out?

Don’t we have extras?

NO KIDS, WE CANNOT HANG UP ORNAMENTS UNTIL YOUR FATHER REALIZES THE INHERENT VALUE OF MOM’S HANG UPS ABOUT WHICH STRAND OF LIGHTS ARE THE RIGHT ONES.

It’s super faith-filled and joyful. And not a bit rational.

The longer I’m at this ‘living as a fallible human’ thing, the more I recognize the space our emotions take up in approaching the mystery of God. Advent is meant to chip away at our sense of control and order so that we can be ready to welcome God among us at Christmas—a slowing down, an unbinding of the ‘hopes and fears of all the years,’ so that they can actually be met in God’s incarnation.

The Church has created an order to accompany us into the disorder of God’s love—Advent gives us a structure in which to untie the knots of our own making. And from the outside, that seems rational, but none of the knots that we have bound ourselves up in—or which have bound us—are rational ones. Each human has a hang-up about Christmas in some way, shape or form, because of the very vulnerable nature of the season. We attempt to understand God among us—God among the hurt and disorder and inflatable Santas and overconsumption and broken cookies. We try to make this as rational as we can, but it is almost entirely seated in the emotions.

Rationality is invited to this season, but rarely attends. 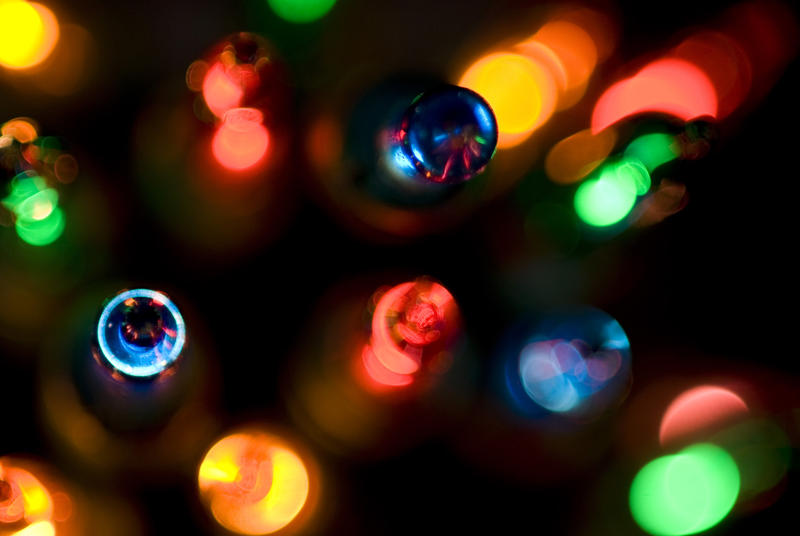 As I sat on my living room floor on Advent 2, scrolling through our online neighborhood yard sale sites, determined to find working tree lights which felt like Christmas to me—I discovered the place where Jesus needs to be born. It’s not about which lights we have—but it’s not NOT about which lights we have. The lights remind me of the holidays of my childhood and past—a moment of calm in a sea of, often, familial chaos. They remind me of something constant and connected—similar to my insistence on hanging the pickle ornament first. The colors which glow in the darkness of the season are the ones which have greeted me for years as I have come in after the late Christmas Eve service into the stillness of the Nativity morning.

And maybe you are too.

I do fall behind in Advent with our wreath and candles and slowing down—but perhaps it’s not in the stillness that I recognize our longing for God’s presence in this world. Perhaps it’s instead in the longing for something familiar, comforting and known. I can see that tendency starting to take shape in our children as well as they begin telling the stories of ornaments, taking sides in their parents’ Annual Christmas Tree Light Spat, and naming their own longings and hopes for the season, even if the words aren’t quite there yet.

And I can see it in all of us. When we turn off the lights and sit in the stillness and glow, our rational sides start slipping away, while our emotions and imaginations and hopes edge nearer. Preparing us for the least rational, sensible, predictable dwelling of God, which is right here, among us, within us, through us.

As long as the right lights are on the tree.