What is your favorite day in the Church Year? Christmas? Easter? Pentecost? All Saints?

Does anyone ever answer with Ascension Day? Unlikely. Especially among the preachers I know. And yet Ascension is one of the seven Principal Feasts of the Church Year.

And it lacks good craft activities

I cannot recall a single Ascension craft activity from my childhood or that of my children’s. When they became teenagers, a clever meme featuring a Hamilton lyric paired with John Singleton Copley’s The Ascension made them chuckle: “Watch this […] loudmouth bother be seated at the right hand of the father.” 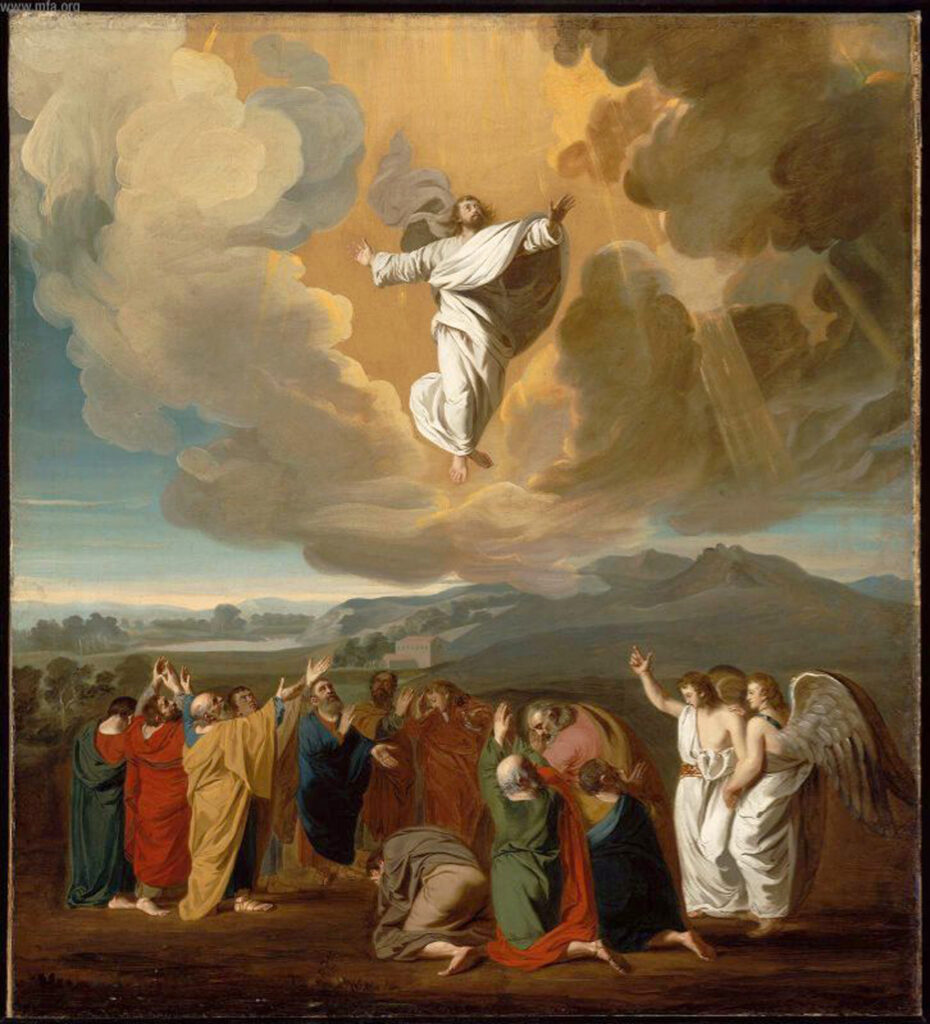 The fortieth day after Easter Sunday, Ascension inevitably lands during yet another hectic work/school week. As such, it falls between the cracks of Sixth and Seventh Sundays of Easter and out of sight.

When we stop to celebrate and think about the Ascension, it can make some of us — myself included — uncomfortable. Specifically, the how of it.

Thinking of Jesus rising like a balloon in the sky until he disappears? Or traveling through space like the Hubble Space Telescope? Not helpful. What is a post-Enlightenment mind to do? I find returning to the scriptures helpful.

In the first chapter of Acts of the Apostles, the risen Christ appears to his disciples. He tells them they will be empowered by the Holy Spirit and they will be his witnesses. They will carry on his mission and it will spread “to the ends of the earth.”

“…as they were watching, he was lifted up, and a cloud took him out of their sight.”

Another mission-focused departure in Acts happens after Philip baptizes the Ethiopian eunuch. “The Spirit of the Lord snatched Philip away…but Philip found himself at Azotus…”

I am not a literalist and yet this makes me pause. We live an Easter reality in which Christ ascended and Philip was also snatched up?

Just over six months ago I accepted a new call to serve a church. It required selling my house, packing up, traveling with cats, and finally moving into my new home. It was an intense time that was full of stress but also full of an enormous amount of grace. During this month-long process, I experienced a strange time compression. Something I had never experienced before. Frankly, I don’t know how to express it but to say there was a definite spiritual aspect to it. I was in one place … and then suddenly found myself in another! I remembered Philip being “snatched up” in Acts and thought to myself: that’s it!

The cameras were not rolling at the Ascension. But those who were there witnessed and experienced something profound and described it as best they could. Along with sharing Jesus’ promise to send the Holy Spirit to continue his mission.

Once our minds can relax a bit about the how of the Ascension, then we can embrace its significance: risen humanity.

Our future hope is “…that where he is, there we might also be…” as the Ascension Eucharistic proper preface so beautifully states. But theologian Gustavo Gutiérrez brings it home for us in our present, “Jesus ascended with the dust of Galilee on his feet.”

At the Ascension, the life of God eternally incorporates the flesh of Jesus. Never again can anyone say that humans do not matter. Our bodies matter. God grieves human violence and cares about your child’s skinned knee.

For God has chosen to bind God’s self to humanity, not only in the Incarnation but now eternally in the Ascension. And perhaps that is best described as it was recorded in Acts, “he was lifted up, and cloud took him out of their sight.”

So, you may be wondering, what is a good craft for that?

I invite you to decorate small gift boxes with warm colors and messages of God’s love, then fill them with Band-aids and give them away. For one thing we know for certain on this Ascension Day: God loves you and cares about your skinned knee.