When I was a little girl, the closet in my bedroom had a back door. You pushed through clothes, unlatched a hook, and behind the door was a dark tunnel: a slanted crawl space that ran the length of the house. Among the various boxes stored there was an old green trunk, and when I was nine years old, I turned that trunk into an altar. I managed to sneak a candle upstairs, and sometimes I would go through both doors, light the candle, and just sit there, simply knowing that I was in the presence of God.

That is, until my mother needed something from one of those boxes and discovered my sanctuary. She explained that I could quite easily burn the house down by burning a candle in that small space, and she took the candle away. She was right, of course. It was dangerous. But I grieved the loss. Lutheran theologian George Lindbeck once wrote that “religion is like a language that one must have begun to learn before being able to grasp what is being said in it.” I didn’t have language for what I was doing at that age; I just knew it mattered.

Lindbeck’s idea that we are somehow called to worship before we even understand what it means takes me back not only to the little girl in the crawl space, but all the way back to the meeting of Mary and Elizabeth and their unborn children. 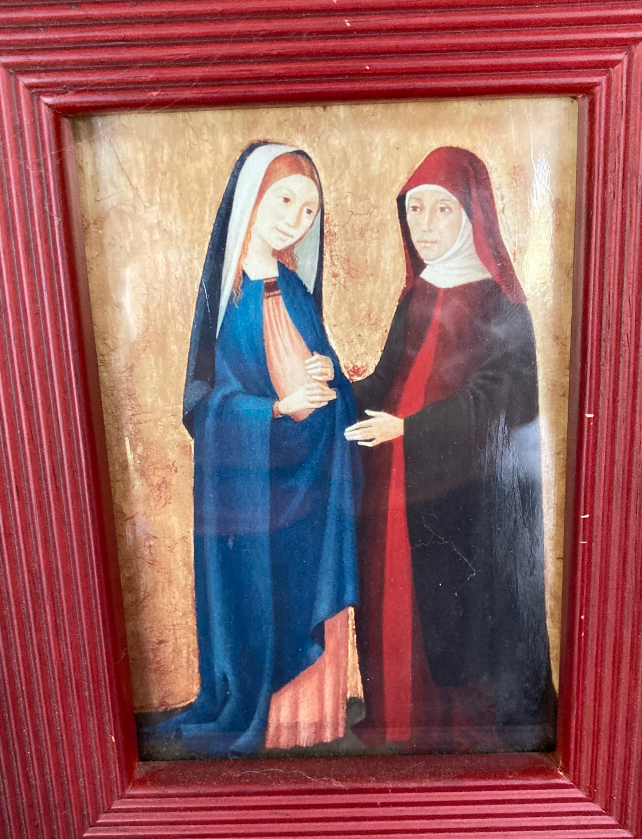 Postcard of the Visitation, from 1997 pilgrimage to Jerusalem

John – still in the womb – already experiences that innate call to worship as he leaps with joy in the presence of the yet-unborn Jesus. And Elizabeth is the first person – way before Peter – the first person to recognize who Jesus is. “Who am I?” she asks, “that the mother of my Lord should come to me?” Then she blesses Mary: “blessed are you among women,” and she blesses Jesus: “blessed is the fruit of your womb.”

And it is immediately following these blessings that Mary offers her Magnificat. For years, I would say or sing the Magnificat without really “being able to grasp what is being said in it.” The language sounded beautiful and inspiring, touching my heart the way my illicit childhood candle did.

During those years of taking comfort in the Magnificat, I had no idea that Dietrich Bonhoeffer had called it “the most passionate, the wildest, one might even say the most revolutionary Advent hymn ever sung.” I hadn’t read the Chicago Sun-Times article that notes, “In Guatemala, the mother of Jesus became a fulcrum for liberation theology’s social justice movement, compelling the government to ban the Magnificat as subversive [because] Mary proclaims that God will bring down the mighty, raise up the lowly and feed the hungry.”

Clearly for most of my life I hadn’t grasped that the Magnificat could be a far more dangerous fire than my small candle. I hadn’t realized that its very subversive nature lights the way for Jesus’ message of comfort to the marginalized and warning to the comfortable.

So here I am in my old age, not mighty, certainly, but privileged. And so I wonder, now that my heart has been opened to the words of Mary’s song, how can I speak those words with integrity, and not feel called to action? There’s so much work to be done, just as there was when Mary first spoke those words. Powerful people in this country and around the world are deliberately seeking ways to lift the mighty higher, to crush the lowly, to neglect the hungry, and to disenfranchise or destroy those they consider unworthy. Some nights I lie awake in the dark, afraid for my children and grandchildren, wanting nothing more than to take them with me into some imaginary safe crawl space, even knowing that my mother was right: there isn’t one.

I’ve come to realize that the best thing I can do for my beloved family is to take my small candle out into the world: to undertake work for racial justice through Sacred Ground, to support local organizations that work to feed and house those in need, to write letters and join protests and provide support for the other pressing issues of our time – always trying (and failing, over and over) to follow our risen Lord in the work his mother laid out for us. 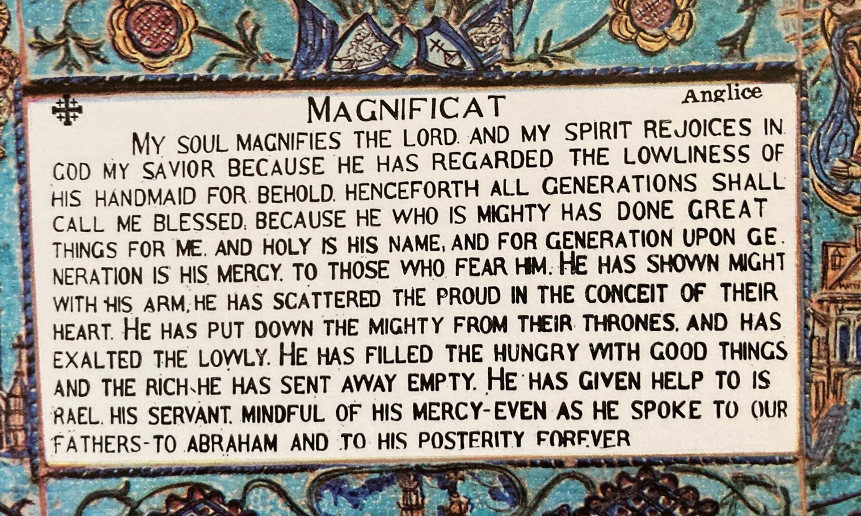