“Dad, DAD, DAD! I know what I want to do when we get home!”
“What, buddy?” I asked
“I want to lead my own sheep herd in Minecraft just like the story! Will you help me?”
I’ll go back just a moment and explain that this exuberant conversation with my six-year-old was how we greeted one another at parent-pickup following his first day of Vacation Bible School last week. And to be perfectly honest, I was about as lost as you, my readers, as we drove across suburban Atlanta.
Wanting to remain curious, but mostly wanting to protect his excited joy and good mood as we headed into heavy traffic, I asked the first question that came to mind. “So buddy, what do sheep, Minecraft, and Bible stories have in common?” The silence in the backseat and his blank stare into the rear view mirror told me that question was a dud. (Is object comparison a first-grade skill? We will try again next year.) I asked another quickly, “Buddy, what is the sheep story?”
“Daaaaaaaaaaad! You’re a priest and don’t know the sheep story?”
Somehow feeling the need to justify the exorbitant cost of my seminary education and also prove my professional acuity to my own kid who at this point is just barely reading, I gave a confident “ha! of course I do!. I just didn’t know which sheep story you were referring to.”
“There are more sheep stories?” he asked.
“Of course!” This was my time to show off, my chance to be the smart dad! Cool dad was always gonna be a stretch, but I can do smart dad all day!
“There’s umm….”
Images of sheep flash in my mind: the Precious Moments picture of a lion and a lamb lying together hanging in our church nursery, the felt board from my preschool with those little lamb cutouts, snapshots of that summer I backpacked in Scotland across acres and acres of sheep pasture and took bad touristy quasi-artistic sheep portraits. While I had quite a mental photo album of sheep which might rival Google Images, I could not recall of a single story from scripture containing sheep.
Then from the back seat, I heard my son mumble just barely loud enough for me to hear, “King David was living with sheep when God made him king of his people. Shepherds were tending sheep when Jesus was born. Jesus is our Good Shepherd, and he laid down his life for us.”
Hoping he thought this was a collective list we were both “contributing” to, I said optimistically “that’s great we remember all those stories about sheep; which sheep story did you read today?”
“Jesus is our Good Shepherd.”
“Tell me about it…” I said in my most enthusiastic high-pitched voice meant to hide real emotions or self-doubt about how easily I forgot those stories.
“Have you ever read it, Dad?” he asked with a hint of impatient annoyance.
“Of course, buddy, I have read the whole Bible a couple of times,” I said, but immediately regretted it.
“Good, then you probably already know what happens, and you don’t need me to tell it to you all over again,” he replied.
“I actually do know the story, buddy, but I also want to understand what that story of Jesus the Good Shepherd and Minecraft have in common.”
What happened next is why I am telling you this story. When we got home, he downloaded Minecraft on my iPad, and I don’t mind confessing that for the next three straight hours, I engaged in what can only be described as “Ignatian Meditation, Version 2022.”
Ignatius of Loyola, whom we commemorate today, was a sixteenth-century Spanish soldier and eventual priest and theologian. He is usually best known as a co-founder of the Society of Jesus (Jesuits) and an inspiring witness and evangelist of the faith through practices that became known as the “Spiritual Exercises.” However, Ignatius’ most popular and enduring gift to the Church and her people is the method of praying and reading scripture he pioneered, which places the reader imaginatively within the story of scripture and engages all five senses to inhabit the gospel text. That prayer practice is known as Ignatian Meditation.
Once the game loaded on my tablet, my son showed me the basics of moving my character and reshaping the landscape. Then we were off on a wild adventure together, using Minecraft to create and engage the stories of scripture as we shaped and inhabited them through our virtual building practice. 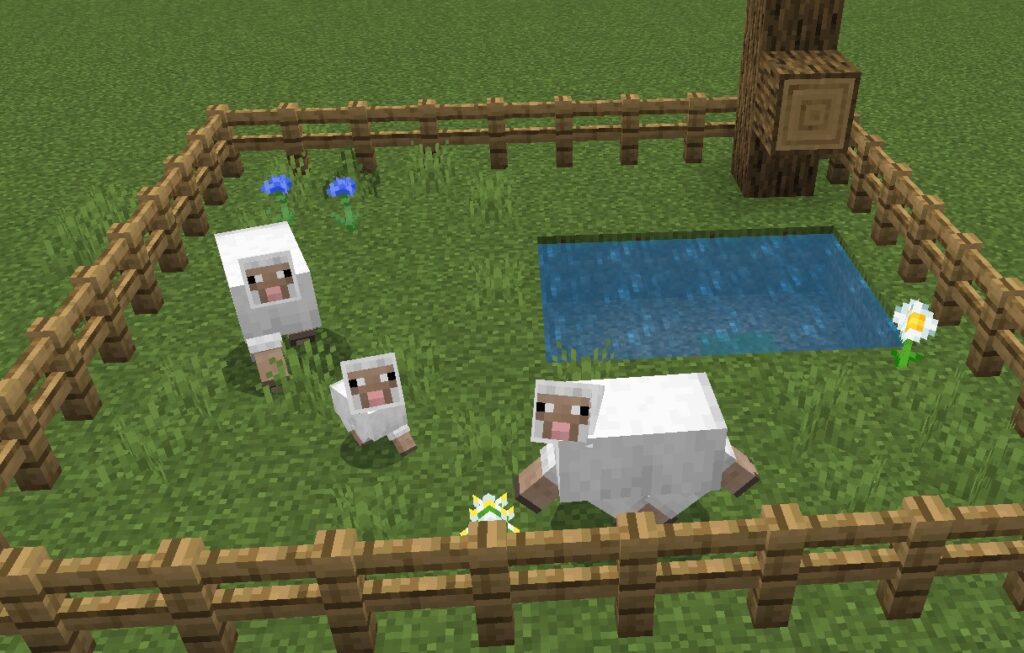 During those hours, we created and inhabited the worlds of several different Bible stories. We started by finding and taming a flock of sheep from the landscape, then building a stable with a small manger tucked inside, plus an inn where we knew we couldn’t stay because it was already at capacity. We created a “diamond palace” for Herod and his servants, and eventually for the Wise Men’s visit on their way to the stable. We also built an ark-like megaboat, a colossal tower that stretched way into the sky, which we then destroyed when it got too high. We laughed, wondered aloud, debated design and details, and totally lost track of time.

Finally, we made a hill in the landscape where I was planning to suggest we place a temple so I could tell him the remarkable temple stories about Simeon and Anna, but he took the iPad away from my view for a few minutes and got very quiet. I could tell he was building and then destroying and redoing until it was precisely the way he wanted, but I couldn’t see much of the screen. Finally, he picked up the iPad and put it in my lap. “That is where they killed Jesus,” he said in the same soft voice he’d used earlier in the backseat of the car. And we sat there for a long minute in total quiet, before, without warning, the iPad just turned off—dead battery.
And this is where, dear reader, I confess I missed an elite parenting opportunity. I set the dead iPad aside and said, “let’s get a snack.”
An elite-level priest-parent would have led him ever so gently by the hand to a wall charger, and dramatically fumbled with the cord for a moment, connected the power, and then with a loud dramatic voice proclaimed, “But death could not contain him, Alleluia! Christ is risen!”
I am not an elite-level parent, yet, dear reader… maybe next year.
In every building site and project we made on Minecraft, we talked about design details, imagination, and emotion. The only time we were not talking or laughing or imagining the world of the stories as we built them was when he pulled the iPad away from the center of the couch cushion and into his lap to form the cross he made in silence.
On this day where we celebrate the man who taught us to pray with our whole selves through sensory imagination, I learned more about the nature of God in three hours of Minecraft than I have in quite a while. I experienced growth in our relationship as we recreated these stories. I heard a depth of delight I heard in his voice while creating and imagining the stories of this faith we share. I felt an incredible outpouring of love as I learned how much he knows about the Bible and how creative and imaginative he is at this tender age. The powerful bond I nurtured with him in those moments, those are what God experiences and feels for us his children. Those are how God connects, empowers, and nurtures us.
In keeping this feast, find some way to create and inhabit your favorite Bible story today. Close your eyes and go there in your mind, draw or paint a picture as you see it in your imagination, tell the story through your own cultural lens and experiences, or jump into your favorite digital creative sandbox game to map it out as we did.
Whatever you do, let yourself come alive in these stories, and give thanks for Ignatius’ gift of encouragement to let scripture come alive in us, and for our God who gets close and personal when we let our creative imaginations run toward His word.