Growing up when and where I did, racism wasn’t something that was necessarily talked about. As I remember it, it was more like racism just hung in the air around us. It wasn’t until I was older that I could recognize and acknowledge the role racism played in my community and how pervasive it was, but not just there — everywhere.

After time away at college and seminary and a stint in south Georgia, my family and I ended up in the Episcopal Diocese of the Central Gulf Coast. Each year, that diocese and the Diocese of Alabama host a pilgrimage in Hayneville, Alabama commemorating the martyrdom of Jonathan Myrick Daniels. I remember these pilgrimages vividly because they always occur in August, when Alabama is at its hottest. Each year we woke up early to make the drive, then ended up parking somewhere far away, having to walk a long way to join the crowd on the lawn in front of the Lowndes County Courthouse. We’d receive our bulletins for the procession around town, then begin the pilgrimage with a communal prayer.

I always appreciated the opportunity to attend, but it also struck me as a strange experience. People from so many places descending upon this small town way off the interstate, spending the morning together, walking to different markers in the community: the jail cell where Daniels and others were held following their arrest; the concrete slab left from the store where he stepped in front of the gunman aiming to kill a young Black girl; ending inside the courthouse to receive communion where his murderer were acquitted. 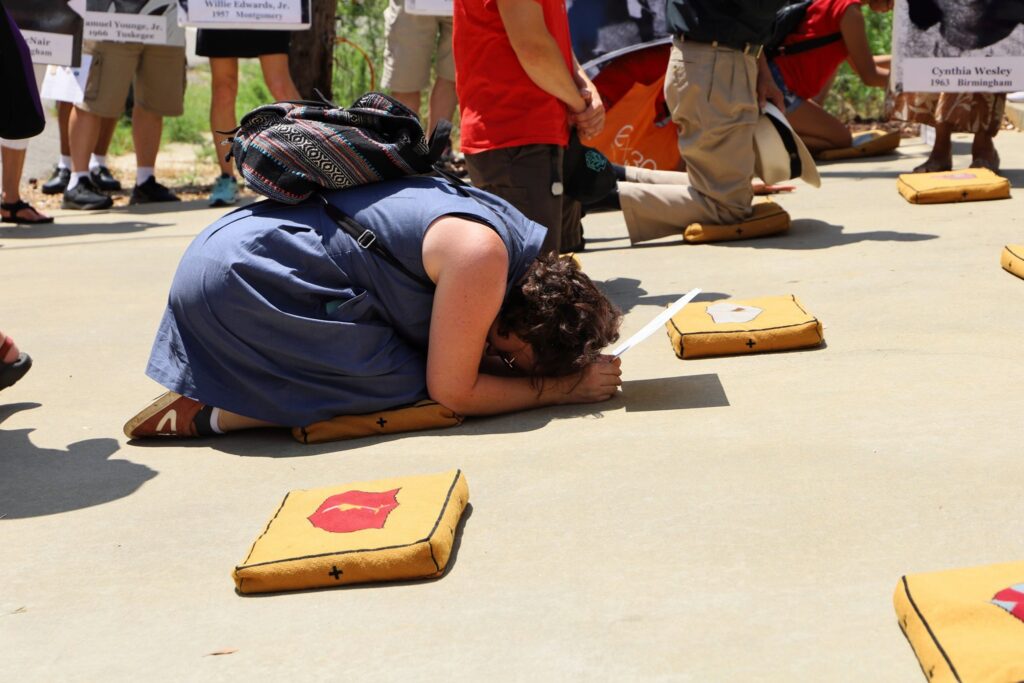 A pilgrim prays at the site of Jonathan Daniels’ death.

Then, afterward, we all leave town to go our separate ways, not to return until the following August.

Each year that pilgrimage is the same—the same prayers, the same excerpts from Daniels’ journal, the same icons of the Alabama martyrs. But each year it feels different based upon events of the nation and the world that had happened since our last gathering. One year, I remember it feeling almost celebratory because we were marking an anniversary and the presiding bishop was there and people from further away than usual had made that trek. Another year, I  remember feeling like there was a pall over the whole event, probably because of some horrible, racially-charged tragedy that had recently taken place in our nation.

Both kinds of feelings were reminders of the importance of the gathering. I needed to be there to do some reckoning with my own growing up. We needed to be there to remember what had happened and what continues to happen. And the witness of all of those people gathered together  was a reminder to each of us that there is still so much work to do in the work of healing and racial reconciliation. 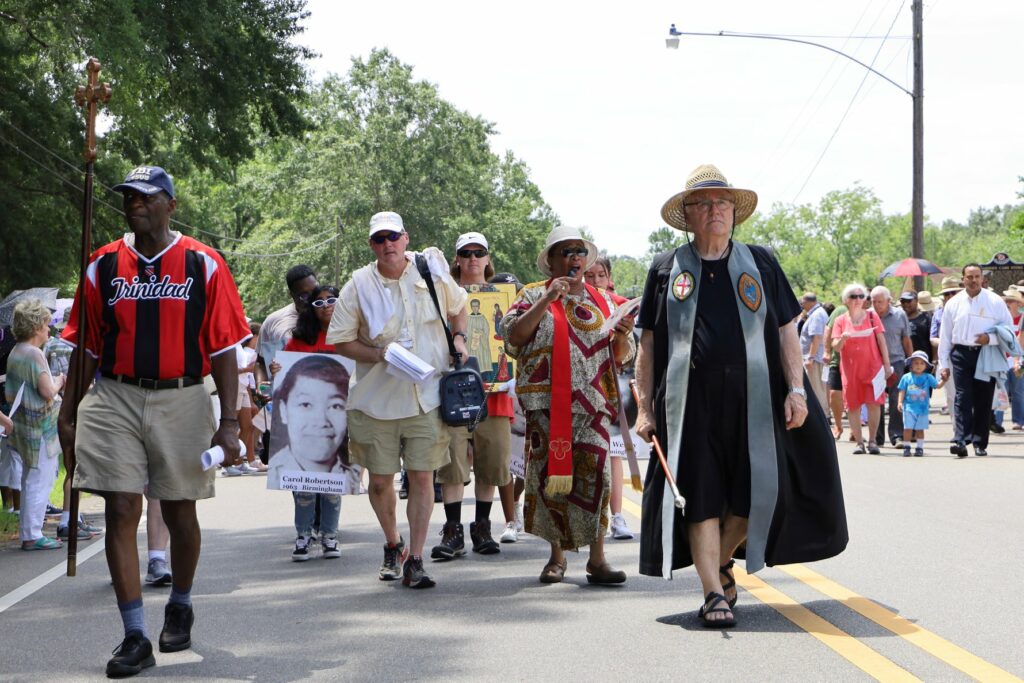 Where I continue to struggle, in a way that Daniels and so many others have not, is finding my own role in this work. As an individual, a Christian, and as a leader in the church, knowing when to push and encourage others is an ongoing challenge for me. What those hot days in Haynevillle taught me, though, is that no one person can do this work alone. It’s often incremental, and too often we take steps backwards that can feel like negating  the work of those who have gone before us . Even still, we continue remembering their work and their footsteps which we follow, hoping to have even a bit of that same courage when we encounter those ongoing feelings of hate in our world today.

[Image Credit: All photos were taken by the Rev. Kelley Hudlow of the Diocese of Alabama and used with permission]