I was sitting on the dock of our diocesan camp, the Barbara C Harris Center, when I began feeling uncomfortable. Once I could put a finger on the feeling, I realized it was a niggling sensation of doubt.

In the sun, on the dock with my feet in the water, keeping an eye on some of our swimmers during a free swim period, I had a moment to wonder about this particular feeling. I was serving as a camp chaplain that week and all had gone well to date—things are always different at a camp which had last had campers for overnight camp three years ago, but it had been a wonderful week so far.

What was I missing, I considered. Had I forgotten to do something? Had I dropped a ball somewhere? Was someone waiting on an email from me?

Four campers distracted me by a group jump into the water from the floating dock—1, 2, 3, they yelled, holding hands as they hurled themselves into the lake.

Did I put my away message up, I kept thinking. Pay for my kids’ camp registration for next week? Prep the sermon for this evening? Put on enough sunblock?

The four campers jumping into the water from the floating dock had now become seven—now they were yelling to other counselors ‘HI [insert name of counselor here]!’ while hurling themselves off the dock, again holding hands as they jumped into the water.

I’m supposed to be doing something, right? I kept thinking. Being helpful? Having an epiphany (a vocational hazard for clergy)? Did I put the electrical bill on autopay this month? If I have this moment of “freedom”, maybe I should just meal plan for next week, out here, on the dock, by the lake, in the woods?

Nine kids—the floating dock now precariously tilting— jump into the water together. I have no idea what they agreed to yell, because their immense laughter and splashing drowned out anything intelligible.

“Do not be afraid, little flock. For it is your Father’s good pleasure to give you the kingdom. Sell your possessions, and give alms. Make purses for yourselves that do not wear out, an unfailing treasure in heaven, where no thief comes near and no moth destroys. For where your treasure is, there your heart will be also.”

There are years when I have read this scripture or spoken to my children about it, and have thought to myself, this is a bit obvious even for Jesus. Of course, we know that what we value reflects the state of our heart—of COURSE we know not to hang on to the things ephemeral as if they were life jackets. Of COURSE we know that what we do in this life is a reflection of the faith we espouse. 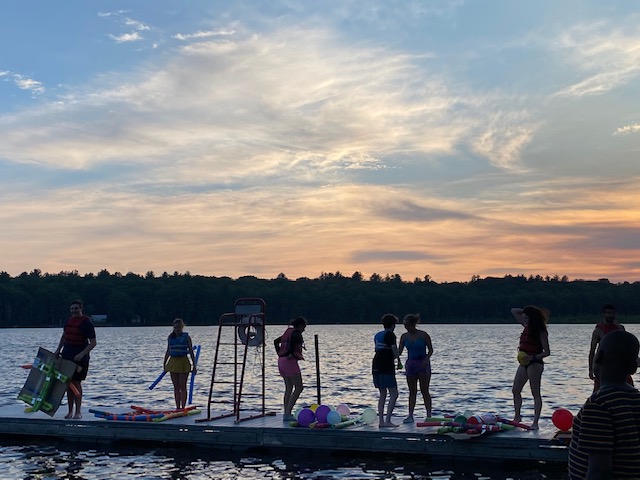 But that day on the dock, with the kingdom of God right in front of me, literally getting me wet, it turns out that this scripture hadn’t truly settled in, and I started to notice the points where it wasn’t taking:

When my joy has been pinned on a specific outcome, and it doesn’t go to plan.

When my mind refuses to settle and rest in the now, and instead continually looks to the future.

When I keep thinking that the kingdom of God is something grand and profound, and instead, forget that it is steeped in us and around us, over and over again.

When I forget that we are the builders of the kingdom, with our own imperfect tools, on our own timeframes.

Even as we enter into September, I remember that feeling on the dock as though it was yesterday. As I sat there, plotting my own salvation through Good Protestant Effort, two girls readied themselves to jump into the water, just a few feet away from me. As they got ready to jump, they looked over at me, sitting alone. And one, with a sparkle in her eye, said ‘You want to jump in with us?’

I hesitated. And then I said yes, and I jumped into the water not caring about the next step, the follow-up, the plan. And it was fully glorious.