Something I’ve learned over the past decade from serving The Diocese of Virginia as the Director of Shrine Mont Camps is that time feels different when you are at camp.  The time is so full that each day creates a week’s worth of memories for staff and campers who call camp “home” for part of the summer.  At the same time, a week of camp flies by!  Sometimes a whole week feels like it lasts only the length of one day!

With various camps cycling in and out of Shrine Mont on any particular day, I’m used to memories blending and blurring by the end of the season. Without fail though, there are always a handful of moments from the summer that stand out in my mind long after the weather turns chilly. I’d like to share one of those memories with you.

It was the day of the big all day hike for one of the camps running at the time, and one camper who couldn’t participate had to stay in the infirmary with a nurse until everyone returned in the afternoon. At lunchtime, I walked to the dining hall and discovered a rare occurrence at camp: it was quiet and nearly empty! The lunchtime camp community was reduced to just a small group of leadership staff, nurses and that one camper who couldn’t hike. I hesitated in the entrance of the dining hall, looked around, and then someone made an audacious suggestion that maybe we could go off campus for lunch!  In one minute, this ragtag group of two nurses, one camper and two leadership staff members buckled up in the camp van and headed down the road, giggling because it felt like we were doing something wild. We were actually leaving Shrine Mont while everyone else was on top of North Mountain! We stopped at the local diner half a mile away, and as we climbed out of the van the walkie-talkie crackled to life on my hip. It was the camp! They made it to the top of the mountain and wanted to say “hi!”

Our lunchtime group walked around until we could see the North Mountain rock where the rest of camp stood and we could almost make out some figures from so far away. We watched quietly and listened. And listened. Finally, we caught a sound rolling off the mountain – shouting! The camp was shouting in unison “The Shouting Prayer,” a Shrine Mont Camp standard. We looked around at each other with even more excitement than before. Here we were… OFF campus… looking up at a rock… and listening to the camp shout things like GOD LOVES THE WORLD and GOD LOVES YOU at us!

We shouted the responses back, then entered the restaurant where we enjoyed a fantastic meal and lively conversation. As we returned to camp, I chuckled to myself about the events of that day.  Spending those few hours with my leadership team and one very enthusiastic camper remained in my mind long after the summer ended because it displayed many components of what makes life at camp so wonderful.

At camp, we work our hardest to show each camper how important he or she is – not only to us but to God. When things are at their best, every camper goes home with the knowledge that they are valuable, important and worthy of being loved. The power of a week (or more!) spent at a camp is that campers become empowered and inspired to take that image of themselves and use it to go out and show that love to the world after camp ends.

And the best part?

Sometimes, even when you are apart from that place, you can still catch a reminder that GOD LOVES YOU and GOD LOVES THE WORLD.

From Shrine Mont Camps in the Diocese of VA

(Best prayed as loudly as possible) 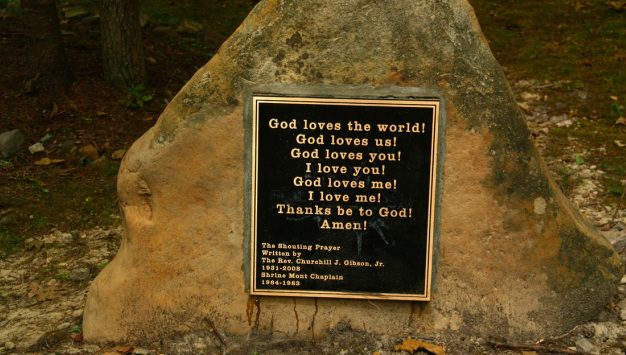