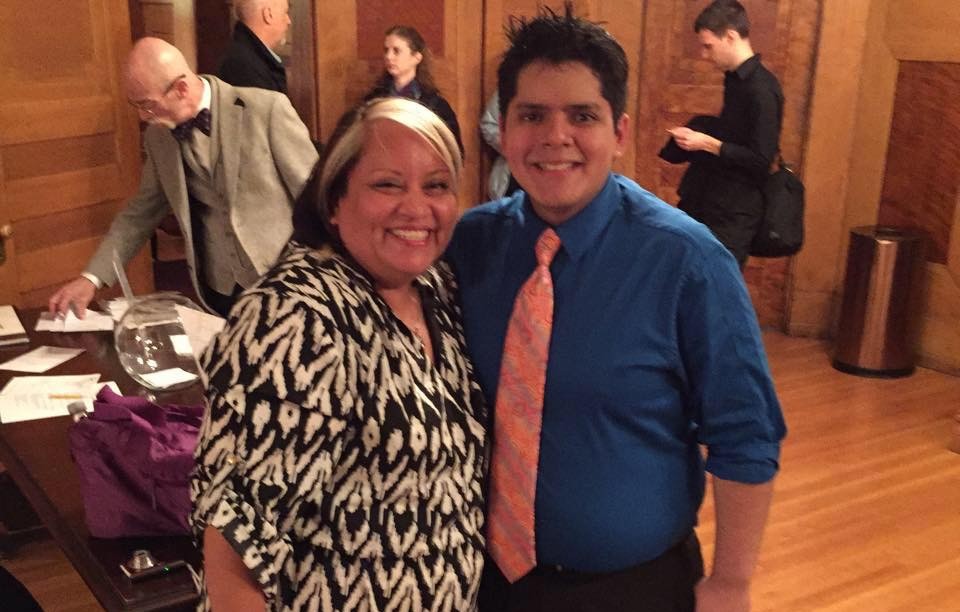 Since Easter is my favorite time of the year, I have always made a big deal about it with my son.

When Ellis was growing up we went through some tough times because his dad and I divorced when Ellis was very young. I remember feeling guilty about being a single parent for Ellis or not doing “mother” things that I saw in movies. As I look back I think there were many Lent seasons in our life filled with wilderness, uncertainty, and maybe even darkness.

Ellis is a cradle-born Episcopalian and our Latino faith tradition is rooted in my parents’ Evangelical upbringing. So, I did not grow up observing Lent as many of my Episcopal sisters and brothers did nor as my Roman Catholic sisters and brothers. I heard once in a while how someone gave up something – usually sweets or soda – for Lent, and I remember getting fish on Fridays in school growing up, but I did not really understand what Lent meant.

As I grew older and learned more about my Episcopal faith and traditions I began giving up things as part of my Lenten discipline. I always joke that I would hold a candy bar to my mouth every Saturday of Lent waiting for the clock to strike midnight and take a huge bite praising God that Sundays weren’t part of Lent (which I learned while on a taxi ride with five bishops).

Then I realized that although it was difficult for me to give up something like candies or sodas, there had to be more to make Lent meaningful. I started adding things to my discipline – reading the Bible more, daily writing and meditation, songs, and sharing with others – especially Ellis.

I always hoped that I could be like my parents, who taught me to love Jesus with their example and actions rather than words or sermons. Ellis, my greatest blessing, has taught me what it is to live a life in Christ – in the risen Christ with his own life.

Everything we do during Lent – meditations, discussions, meals –leads us past the cross and to the empty tomb (and to the yearly Easter baskets I make for him and my nephew and nieces). I pray that Ellis has seen that in me.

I pray that Ellis can see past my own crosses that I carry openly or silently and can see the empty tomb towards which I walk.

When I was younger, I remember that Lent was a time to give something up for forty days. It usually had to be something that was difficult to give up, because that way it would have meant something. I would usually give up sodas (which is something that would be so easy for me to do nowadays), because my mom would give up sweets almost every year.

This practice evolved though, particularly when I was in high school, for I was trying to see which habits would have made the season “worth it”. I ended up giving up meat for Lent one year, and I remember that that was quite a challenge, not only for me, but also for my mom. We had this thing where we would generally share in our Lenten fasts, especially as I got older. I remember I didn’t like the idea of giving up sweets when I first tried to give things up, but eventually I did come around to giving up things that my mom also tried alongside me, and meat was one of them.

It was quite difficult, of course, especially being Latino, where meat is the only food there is. One day, after a long day of school and church, we got home and had brought some fast food along for dinner, which had meat. I was concerned, but my mom told me not to worry about it. In fact, I learned a lot about not worrying about the fast on a particular day. Sometimes, she would explain, if one day would be a slip up, it would be imperative to make up for it on a certain Sunday, which were the days we considered as free days. And that’s how we carried on with our fasts.

As I got older, I started realizing that Lent was much more than just giving something up. Looking back, I feel as if my mom made it a point to become more spiritually involved in Lent every year, from starting with a simple giving something up to encouraging a stronger life of prayer.

A few years ago, my Abuelito, our rector, began a tradition of forty hours of prayer, from Fat Tuesday into the Ash Wednesday mass. I was confused about how it worked, since people were supposed to sign up for one hour of prayer. One Hour! It wasn’t until my mom had me sign up for an early morning hour to pray with some of the young adults that I understood how it worked. We prayed for a few things that were written on a sheet of paper in addition to our own petitions, for the whole hour.

This engagement in the season of Lent was something that my mom instilled in me at a very early age, and I thank God for that. Every year, I find Lent as an opportunity to explore new facets of prayer, devotion, and, of course, fasting. Yes, it is a difficult time, but it is also an enjoyable one, where abstaining from food for over 24 hours and praying for three hours straight became very appealing to me, and posting daily Lenten reflections seems more like a challenge than a chore.

Do you share Lenten practices with others in your family or church community?