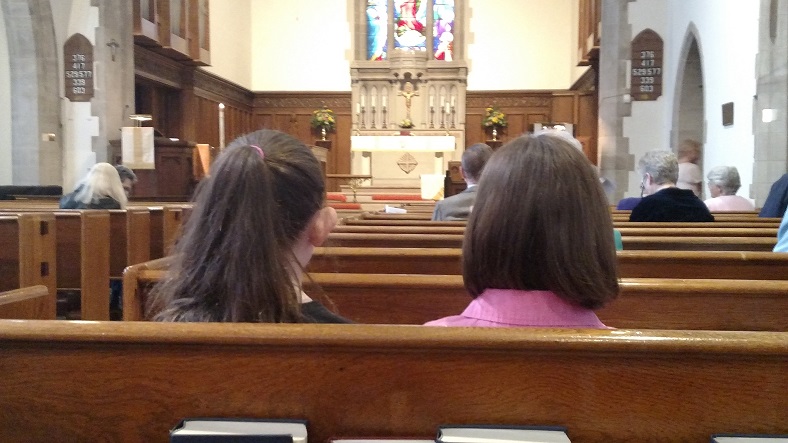 I’m familiar with the glance of trepidation shared by the older couple as we slide into the pew ahead of them in church. They see a single dad with two young girls. They’re probably resigning themselves to a service done in by distractions, rudeness, and electronic gadgets. By the end of the service, though, it’s usually a different story. By this time, they’ll have seen the girls sitting quietly, singing the hymns, and joining in the prayers, nary an iPhone to be seen.

“Your girls were so good in church!” they’ll say, “How did they do that?”

I used to thank them and say, “Well, my wife is a priest…” but I came to realize that something odd would happen at that point. The smile would become fixed, the eyes would glaze over, and they wouldn’t listen to a single further word that that I said. I couldn’t understand it. Why this response, especially when they are asking me how it had been accomplished?

Then one day it hit me like a ton of bricks.

They think that my kids came this way. As if there’s some mitochondrial switch inherited from my wife that makes the girls perfect little angels in church! Lemme just say: this is most certainly not the case… No—what you’re seeing here is not some kind of genetic accident. This is years of hard work. This has been a joint effort; my wife and I have worked together on this, teaching and shaping them, but due to her Sunday morning commitments much of the pew-time activity has been directed by me backed by an arsenal of hissed directions, subtle and not-so-subtle cues, and withering death-stares. If there were such a thing, I totally would have unlocked the achievement “Pew Whisperer”!

These days, I have a a little script and I’ve crafted it with care and forethought. Now when someone complements my on my kids, I say this: “Thank you! Worship is important to our family, so they’ve had lots of practice.”

I don’t mention my wife’s job anymore, because in one sense it’s not relevant. My kids don’t behave because their mom’s a priest. They wouldn’t have the option to behave any other way no matter what she did. Worship is important to how we as a family understand the Christian faith and how we live it out. In fact, I think folks have it backward: it’s not that we value worship because she’s a priest—rather, she’s a priest (in part) because we value worship. How we raise our kids is just another aspect of how we feel about worship.

The more important point, though, is practice. What’s the best way to learn how to behave in worship? It’s to be in worship. Sure—there’s more to it than that. I have a whole trove of the secrets of a pew whisperer that I’ve employed over the years to raise engaged children who look forward to going to worship (most of the time…). But the heart of it is the practice: being there. And that’s something anyone can do.

We care about how our children believe, and the way that they inhabit, engage, and ultimately own a place in the worshiping community is an essential part of that. In our baptismal vows, we promise to share the Good News with others; as parents, our primary mission field is our own kids. For us it all begins in worship. It begins with raising our girls into their baptismal identity as people who praise—giving them tools to claim their place within the worshiping people of God.

What “secrets of a pew whisperer” would you like to know?