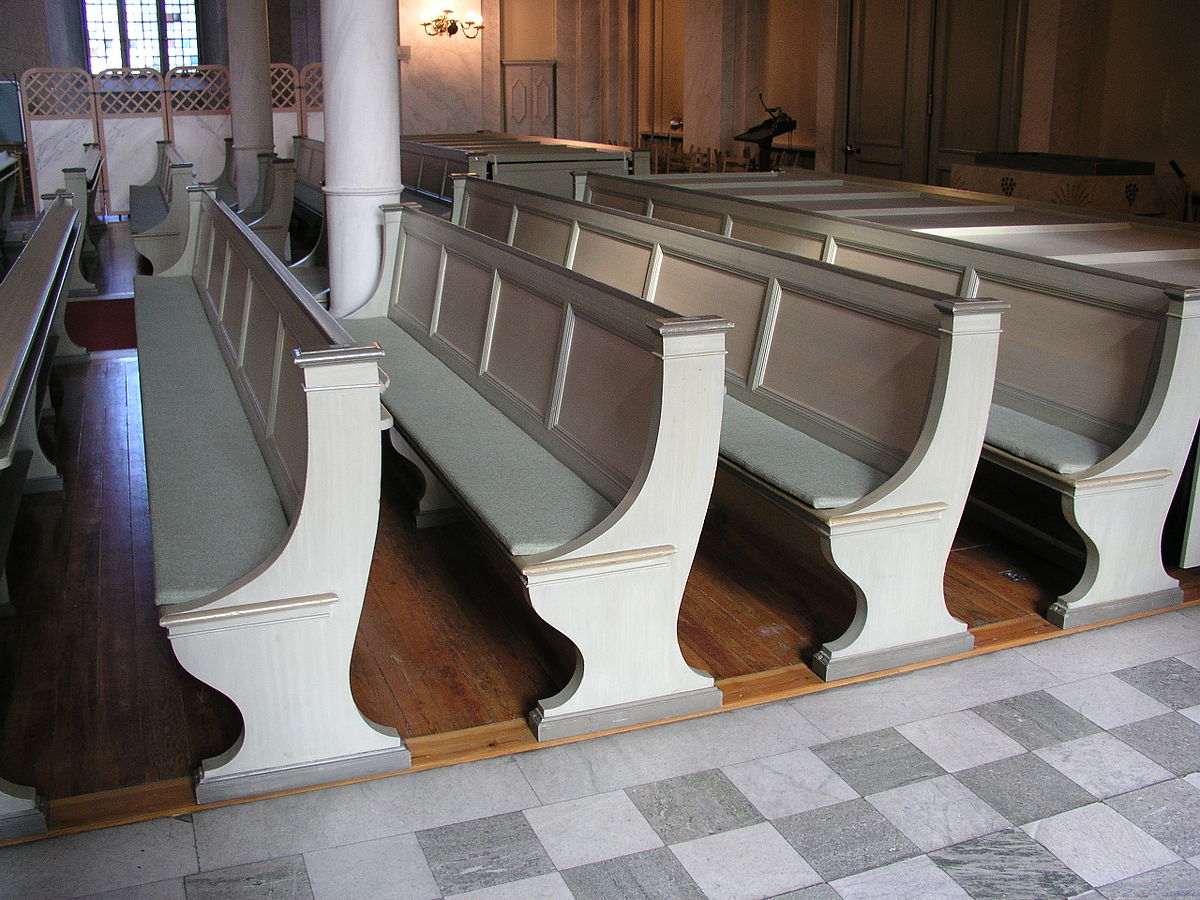 I was raised Lutheran. We were very distinctly “middle of the congregation” people.

In the church where I was raised, the baptismal font—a large, blocky, modernist affair—was in the middle of the central aisle and the pews retreated a bit around it so a procession could go past. We almost always sat on the right side, just up from the font.

This wasn’t a choice based on any sort of theological insights around baptism, it was just what we did. I haven’t been back to that church in years, but I suspect my parents still sit in the exact same seat.  There’s no label on it—but there might as well be.

On occasion I’d be at the very front with the junior choir. We got the first few pews so we could file to the sanctuary steps quickly when it was our turn to sing. But we all knew we were in foreign territory: everybody knows you don’t sit in the first few pews.

When I started going to church on my own, I unconsciously and unreflectingly replicated this pattern with only a few exceptions. During my wild rebellious college years, sometimes I would radically break with all known tradition and sit on the left-hand side of the nave.

Once I became a father and the chief child-wrangler, two new factors introduced themselves into how I would pick a seat: 1) can I get out quickly if the baby starts squealing, and 2) is there enough room for me to swing the baby carrier?

You see, I’d discovered that if the baby got fussy during church. If all else failed, I could put her in the car carrier and then swing it gently to put her to sleep. I imagine there are some parishes from my wife’s early ministry where I may be remembered as the guy swinging the baby carrier in the back of the church. Hey—it worked!

As my girls outgrew the baby carrier, and I started having both of them in the service to deal with, I gave them more freedom. They had no choice in whether they came to church or not, but I tried to allow them more freedom in regulating their environments once we got there.

I don’t remember how this happened, but at one point, I allowed my girls to pick where we sat. To my surprise, shock, and chagrin, my younger daughter—probably about three at the time?—joyfully ran up to the very first pew on the left, directly in front of the pulpit and in full sight of the sanctuary.

I was rattled. Didn’t she realize that you weren’t supposed to do that? Didn’t she know that people just don’t sit there? Worse, from my perspective, didn’t she know that this placement meant that every single member of the congregation could see us and what we were doing and if they were behaving and if I was being a “good” parent or not?  She seemed to not be taking into account any of the crucial church seating factors! You know—whether it provided anonymity and an easy escape route!

Actually, she didn’t care about any of that stuff. She wanted to see and hear and smell everything that was going on. She wanted to immerse herself—and the rest of us—in the full-bodied experience of church. And, I found that it was a lot easier to take care of them if they could actually see and hear and smell what was going on! They behaved better in the front than stuck in the middle behind ranks of pews and walls of tall standing people.

Since then, I’ve made this a habit. I always let the girls go into the sanctuary first. I always let them pick the pew. Sometimes we do actually sit in the middle of the right side (as God intended). But frequently in new places they’ll insist on the front pews so they can get as close to the chancel action as possible. Of course, that makes it tricky come communion time since if we—the visitors and strangers—are the first ones, I have to figure out the flow of communion on very little evidence. But again, that doesn’t seem to bother them.

I have my habits and my patterns. I have my comfortable places—literally. I have my own criteria for selecting a seat in church. But giving my children the freedom to pick where they want to sit has helped me see the limitations in mine. And, it has helped them see—everything. Church done the way we like it has lots of things to see and hear and smell. And they want to be in the middle of it. They want to be able to access the action and motion and pageantry. And we should let them.

We do best if we hinder not the little children—if we don’t let our own concerns and baggage and anxieties and habits constrain their engagement with the holy and the sacred in the place of worship.

How do you choose your place in church?