At the top of my laptop screen, I have a little piece of sticky-note that covers my webcam.  After all, the last thing I need is Russian hackers trying to steal my latest musings on the Episcopal Church.

[Note to self: new form of digital evangelism? Follow up on this later.]

Recently, on returning from a run—which is where I do most of my thinking—I took it down and, in a fit of frustration, wrote: “If it’s boring, it’s your fault!” Then I stuck it back up. Now it stares at me every time I sit down to write something. 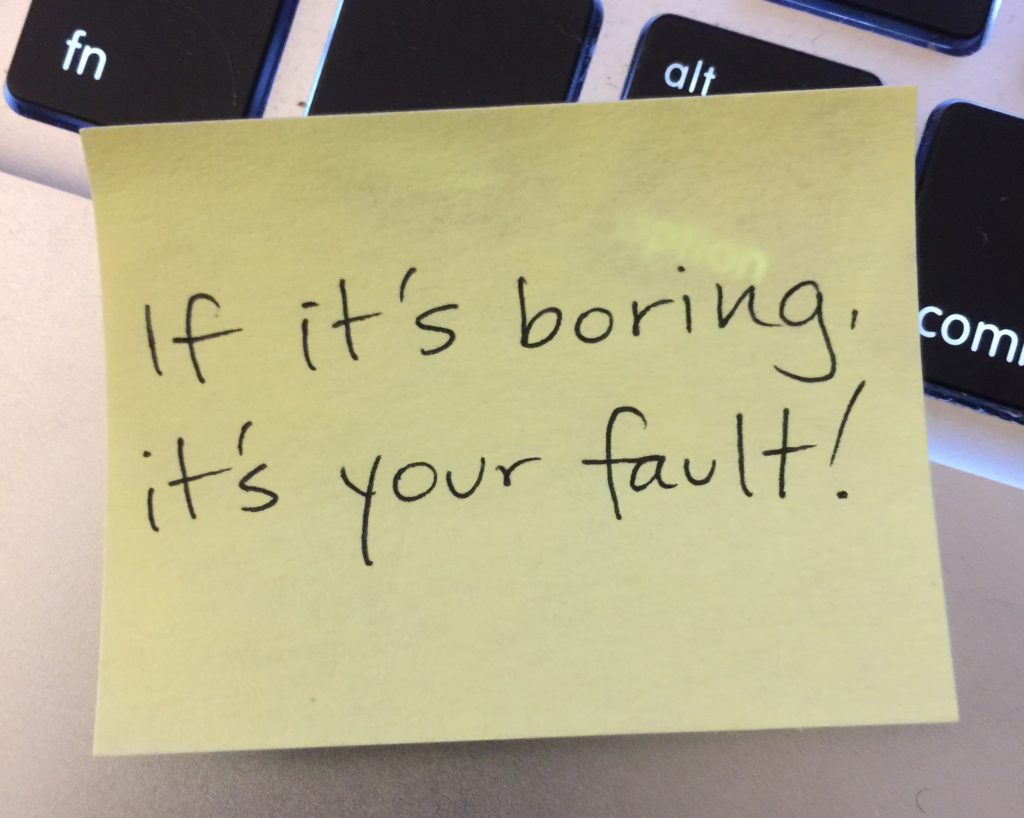 What motivated this rash act was an intractable problem I was banging my head on regarding one particular aspect of a sixth-century early medieval commentary on the Psalms by a guy that no one has ever heard of before. I simply couldn’t figure out the right way to tackle the problem. I’d keep starting chapters on it—and then stop about halfway through. I think I have at least five of these false-starts on my hard drive right now.

I stopped each time because it was boring.

In fact, in a book on novel-writing, I once read an essential piece of advice that hit me on the head like a hammer: the writer said, if you are bored by writing it, it’s a clear sign that your reader is going to be bored by reading it. Bingo! The take-away here is this: don’t write boring because people don’t want to read boring. Furthermore, if it is boring, it’s because you haven’t figured out how to communicate what’s exciting about it!

This sixth-century psalm commentary? It’s actually really cool. It does some very interesting things and pulls some pieces together that hadn’t ever been pulled together before. The excitement is there. The purpose is there. If it’s boring, it’s not the fault of the subject.

If it’s boring, it’s my fault.

Now—why I am telling you this on a site about nurturing faith formation?

We’re supposed to be about communicating the Gospel. We want to communicate it to the young, to the old, to the in-between—maybe even the odd Russian hacker! Attempts to communicate the Gospel—especially to the young—try to be “hip” and “fresh” and “relevant.” That’s great as far as it goes, but sometimes it feels like we’re trying too hard to be these things.

Despite that, the root of the problem is the simple fact that we’re not trying hard enough.

Once we know how it is exciting and how it matters and how it transforms who we are and what we do—then we’re at the place where we can begin talking about it. This may well mean being intentional about rediscovering what it was that made us fall in love with the Gospel and with Jesus in the first place. I want my kids and the people I teach to catch from me a sense of infectious excitement about what I know is already there.

How do you stay connected to the relevance of the gospel?