Not even going to lie. Sometimes I imagine Jesus as a superhero, particularly when I have identified someone particularly villainous in need of a quick lightning bolt to the brain.

I think that might be why I resonate so deeply with Michelangelo’s 16th century fresco depicting The Conversion of Saul. I’m pretty sure laser beams were not in the artistic purview of the revered artist, but to me it looks like Jesus is shooting a laser beam at Saul. 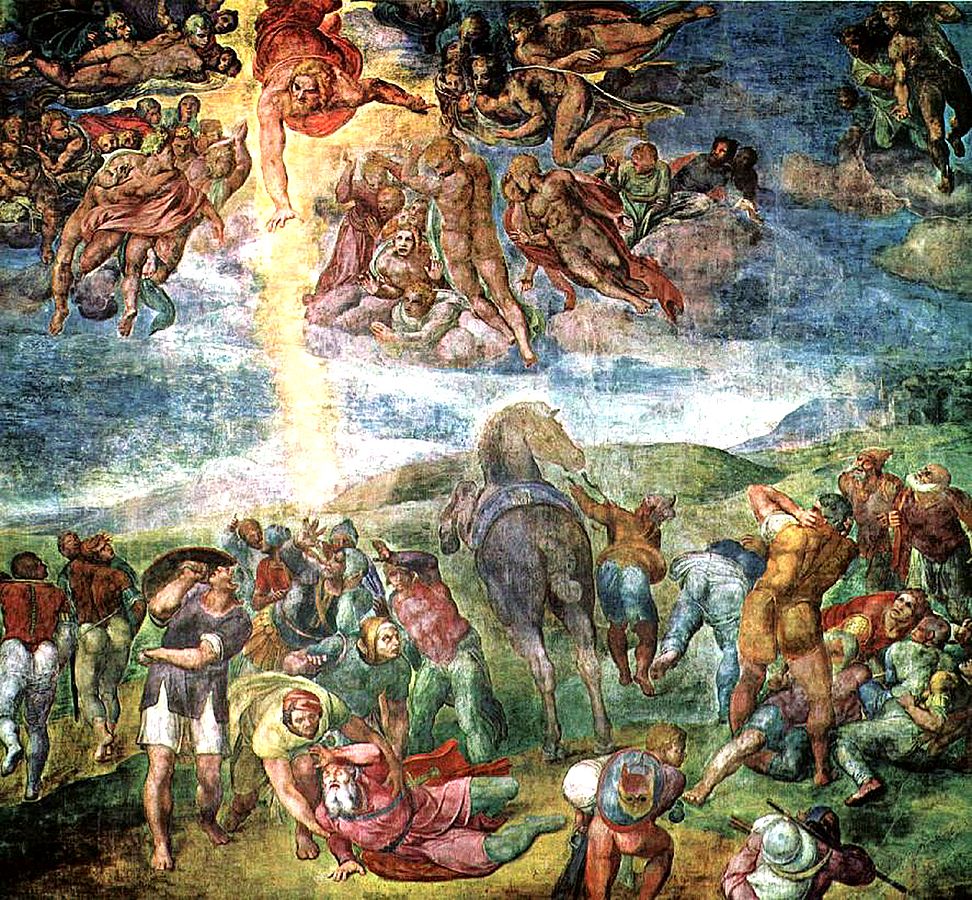 And honestly, if anyone deserved Jesus’ holy laser beams, it was Saul. He was an ardent persecutor of the early Church. The Book of Acts describes Saul as “ravaging the church” (8.3) and “breathing threats and murder against the disciples of the Lord” (9.1). Something about that language feels so visceral to me. It feels like Saul became obsessed with his desire to purge the Roman world of this upstart religious sect. As the “Great Shepherd of the Sheep” (as the Book of Common Prayer describes him), I like to think that Jesus would destroy the wolves who come after his flock.

Except that he doesn’t. In the eyes of our Lord, ravenous wolves are only misguided sheep. Rather than seeking to destroy Saul, Jesus came to reclaim him – to name him as beloved of God and to call him into covenant relationship.

Not exactly the superhero that I want at times, especially when I feel particularly wounded, hurt, or afraid. Instead of seeing this fresco as depicting the “Smiting of Saul,” it displays the searing light of the love of Christ that seeks to penetrate every human heart – no matter how cold, or closed, or damaged.

At a funeral that I was a part of today, I was reminded of familiar words that rang differently for me in this moment. They are the words of Paul to the Church in Rome:

For I am convinced that neither death, nor life, nor angels, nor rulers, nor things present, nor things to come, nor powers, nor height, nor depth, nor anything else in all creation, will be able to separate us from the love of God in Christ Jesus our Lord.(Romans 8.38-39).

No one is ever beyond the searing light of the love of Christ. No one. Not our most dreaded enemy or fearsome opponent. To the eyes of our loving savior, whose love makes no earthly sense, ravenous wolves are merely misguided sheep, and our Lord is determined to lose none of us who have been given to him.

Our bullies are given power when we are relegated to silence and fail to speak their names, so perhaps we can come together as families to talk about the bullies who make us afraid. If possible, speak their names as God does, talk about what they do that particularly causes us to feel afraid, and then read Romans 8.38-39. Perhaps the best way to push through our fear of another person is to be reminded of God’s limitless love for us and for them, love that nothing can stop. Nothing.

Maybe Jesus isn’t my avenging superhero, and maybe that’s okay. Maybe what I need when I am most afraid is a loving savior who reminds me to go to the heights of love even when others go low.

Collect of the Day

O God, by the preaching of your apostle Paul you have caused the light of the Gospel to shine throughout the world: Grant, we pray, that we, having his wonderful conversion in remembrance, may show ourselves thankful to you by following his holy teaching; through Jesus Christ our Lord, who lives and reigns with you, in the unity of the Holy Spirit, one God, now and for ever. Amen.

Do you know of any contemporary conversion as dramatic as St. Paul’s?