Born a member of the Ojibwe people in Canada, Enmegahbowh’s name means “he who prays for his people while standing.” While his name most certainly refers to his own Ojibwe people, all people became his by virtue of his baptism and his role as a priest of the Church called him to a vocation of bridge building.

The relationship between the United States of America and Native Americans has been fraught with challenge and struggle since the very beginning. This meant that the Christian Church often stood against the humanity of Native people. Despite the familiar stories we see in popular media like “A Charlie Brown Thanksgiving” that often depict peace between the Pilgrims and Native Americans, the United States of America and the Church have often failed in our obligation to strive for justice and peace among all people and respect the dignity of every human being, especially with our Native siblings. 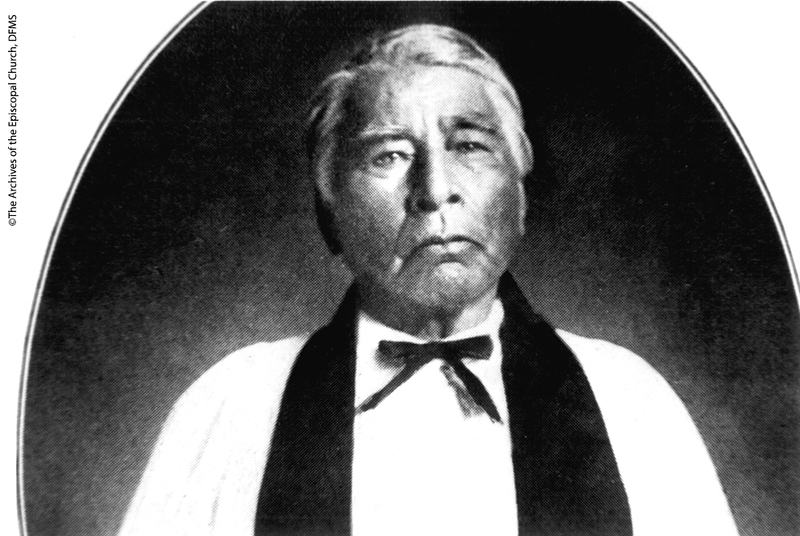 Despite this often tense, exploitative relationship, Enmegahbowh lived his entire life weaving together his indigenous faith and Christianity. Like many people who experience injustice, Enmegahbowh seemed able to take from Christianity what felt empowering and true and reject what was not. Ordained a deacon by Bishop Jackson Kemper in his early 20s and then a priest eight years later, Enmegahbowh can be seen as an icon of what it means to live a nimble, liberating faith.  The kind of faith spoken of nearly two centuries later by Bishop Katharine Jefferts Schori in her 2009 General Convention sermon where she called for the kind of Christian faith that is “light enough to take root in different cultures.”

In the Gospel we read today on his feast day (Luke 6:17-23), we are given a glimpse into Jesus’ so-called “Sermon on the Plain” (Luke’s version of Matthew’s more famous “Sermon on the Mount”). The slice of the sermon we are treated to is where Jesus names the poor, the hungry, those who weep, and those experiencing persecution as “blessed.” For much of our shared history, our Native siblings have been the poor, the hungry, the sorrowful, and persecuted because of our collective actions. Unfortunately, as a result of systemic evil, this remains true. The Gospel demands better from us and saints like blessed Enmegahbowh help to chart a course towards understanding, compassion, and  just relationships.

Perhaps it was Jesus’ appeal to the poor, hungry, sorrowful, and persecuted, instead of the false Christ of exploitative power and racial privilege used by some to support the mistreatment of Native peoples in this country, that deeply resonated with Enmegahbowh. Perhaps something within his own indigenous faith opened a window to experience the love of Jesus. However he arrived at his quilted faith, what cannot be denied is the ability of people, even those living in the most adverse conditions, to weave together what is necessary, and true, and life-giving to support their human thriving.

Blessed Enmegahbowh stood before and in prayer beside his people. May we also stand with him and his people in our continual search for freedom and home.

The Collect of the Day:
Almighty God, you led your pilgrim people of old with fire and cloud: Grant that the ministers of your Church, following the example of blessed Enmegahbowh, may stand before your holy people, leading them with fiery zeal and gentle humility. This we ask through Jesus, the Christ, who lives and reigns with you in the unity of the Holy Spirit, one God now and for ever. Amen.