If you want a teenager to run away from church go ahead and teach them about the virgin saints. If you want teenagers to see the power they hold and the faith they can embody tell them about the the fearless arguers, the brave truth tellers, the rebel saints.

Today we remember three young women whose stories are legendary and whose truths are undocumented.

Lesser Feasts and Fasts tells us that, “Catherine of Alexandria, Barbara of Nicomedia, and Margaret of Antioch were three of the most popular ancient and medieval saints, and they even attracted widespread devotion among Anglicans after the Reformation. In the mid-twentieth century, however, their popularity waned significantly as doubts about this historicity grew. The lives of all three virgin martyrs contain many elements that are indisputably either legendary or metaphorical.”While for many years these women’s chastity held as much weight as their faithfulness, it’s becoming clear that the mythical stories surrounding their lives (dragons, towers, exploding torture devices) do not hold as much power as their truths.

These rebel saints are not mythical beings but rather: 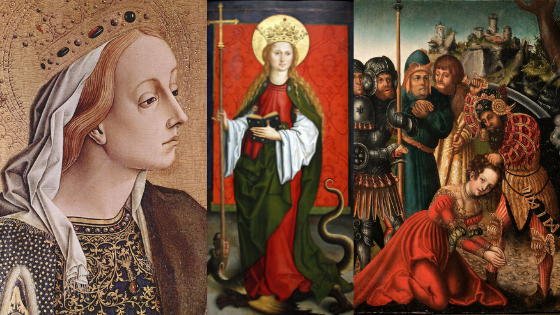 Catherine of Alexandria, Margaret of Antioch & Barbara of Nicomedia

I’ve found in the past thirteen years of working with teenagers that no one wants a fairytale. If you want to speak to a teenager about the God of Love don’t cover it up with sugar and magic… uncover it and reveal the messy and the broken.

Teenagers don’t need an old person explaining to them how messed up the world is.  They need someone to hear about it from their perspective.

I thought myself a real ‘rebel’ in high school with my thrift store t-shirts, angsty Livejournal, and love of NOFX. I now stand witness to the rebels of a new generation. These rebels feed the hungry in their schools, walk out of classes in protest of gun violence, and live their authentic lives even when it leaves them vulnerable and targeted. They learned long ago that life is not a fairytale. They are the product of a post 9/11 world. They haven’t experienced school without lockdown drills. They know about Nazis infiltrating towns and that Black Lives Matter.

They are starving for a church that sees them and tells them stories of the rebel teenagers who have gone before. They need to know they are not alone and that their voice matters. I’m deeply grateful to have a ministry where sometimes my only calling is to stand witness to young people’s power and remind them that the risky business of truly following Jesus can change the world. It can burn down the life they’ve imagined, incinerate the fairytale, and make a new way.

Today, I invite you to share with your teenager(s) the stories of Catherine, Barabara, & Margaret.

[Quote from Lesser Feasts and Fast used with permission by Church Publishing.

Image Credits:  Catherine of Alexandria  And Martyrdom of Barbara of Nicodemia belong to public domain and are used via Wikimdeia Commons. Margaret of Antioch is licensed under the Creative Commons Attribution-Share Alike 4.0 International license and attributed to © José Luiz Bernardes Ribeiro. ]