Today is the Feast of Saint Andrew the Apostle, one of Jesus’ twelve apostles. We know a lot about his brother Peter, whose personality is illustrated through elaborate conversations with Jesus throughout the gospels, but little is known about Andrew. What was his character was like and who was he, other than Peter’s brother?

We know from Matthew’s gospel that Andrew was a fisherman, that he and his brother Peter were fishing together in the Sea of Galilee when Jesus saw them casting their nets and spoke those famous words: “Follow me, and I will make you fish for people” (Matthew 4:19-20).

It is said that the brothers “immediately” dropped their nets and followed Jesus becoming the first two disciples to be called by Jesus. “Immediately,” no questions asked. Peter later shows himself to be full of questions in his conversations with Jesus, and we who are full of questions ourselves appreciate reading Peter’s dialogue, and even his disagreements, with Jesus. But Andrew, at least as it is recorded in the gospels, has little to say or ask of Jesus.

In John’s Gospel Andrew is described as one of John the Baptist’s followers and when Andrew hears Jesus described as “The Lamb of God” by John the Baptist, Andrew drops everything and follows Jesus. Again, no questions asked. In John’s story Andrew is the first disciple to be called by Jesus, the first one of the twelve to drop everything, claim Jesus as rabbi and messiah, and follow him. Also noted in John’s Gospel is how Andrew is the one who brings Peter to Jesus. Andrew calls Peter to go with him and follow Jesus, claiming “We’ve found the Messiah” (John 1:35-42).

Both of these stories capture something about Andrew: his faith was steadfast. Andrew was clear that following Jesus was the right thing to do, no questions asked.

But that doesn’t mean Andrew was free of doubts.

One of my favorite stories about Andrew comes from the loaves and fishes story in John’s Gospel when the multitudes follow Jesus because they have heard of his great works and teachings. As the crowd gathers, Jesus asks his disciples how they will feed these five thousand people. Philip is almost outraged at the question stating that it would take more than a year to earn enough money for each person to have even one bite of food. Then Andrew chimes in, “Here is a boy with five small barley loaves and two small fish, but how far will they go among so many?” (John 6:1-8)

Andrew, bless him, sets the stage for the miracle Jesus is about to perform: the feeding of the multitudes with only five loaves of bread and two fish. Andrew seeks out a possible solution by locating some source of food that could be shared among the crowd. He doesn’t scoff at the idea of feeding this massive group of people. He doesn’t write it off as outrageous or impossible. Instead he follows Jesus’ lead and tries to find something that would work.

But he still has his doubts.

“Here’s something Jesus,” Andrew says, “but how can we make it work?” Andrew makes an effort locating resources and doing what he can to help, but he still has his doubts about how it will work.

Don’t we love Andrew for his earnest attempt, the hope he holds and the doubt he shares with us in this story of feeding the multitudes?

Jesus offers his disciples what appears to be an insurmountable task and Andrew gets on board with Jesus holding both his faith for what Jesus promises is possible and his human doubts. 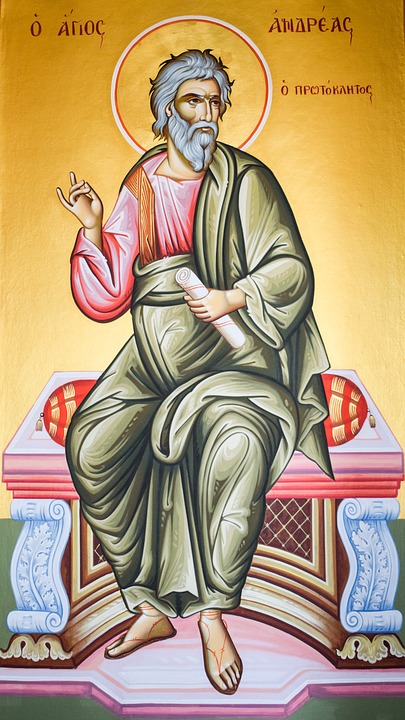 Today, we are faced with what feels like many insurmountable tasks: bigotry and hate filling our news cycle, humans fleeing their homelands for a better life in foreign lands, hunger and famine plaguing families and children, wars and violence breaking out over political and religious ideologies. How can we hold this fear, doubt and frustration alongside our faith in God’s unconditional love and Jesus’ power to heal?

Saint Andrew models this emotional work for us. Andrew holds that tension of steadfast faith and human doubt on his walk with Jesus. Andrew seeks out possible answers, seeks out gifts and resources even in the most unlikely places and brings them to Jesus. The task before the disciples appears insurmountable but Andrew is steadfast, as if to say: “If I can find something to help and I bring it to God, I believe it will become a blessing to others.”

Andrew doesn’t know how the five loaves of bread and two fish belonging to a young boy will help, but he brings them to Jesus anyway. He holds tightly to his faith that Jesus will turn his offering into a blessing. Those fish will multiply into many for whoever needs nourishment, as long as he brings them forward and trusts God will provide the miracle.

We may know only a small amount about who Andrew was, but these stories paint a beautiful and full picture of what it means to follow Jesus.

We will face many impossible problems, troubles and sorrows in this life we have been given, but that doesn’t mean we give up and walk away. Saint Andrew shows us we can do something. Saint Andrew reminds us that we have gifts to offer within ourselves and others, however big or small. We can bring these gifts forward to help feed, heal and bless those around us. And like Andrew, we can hold tightly to our faith that no matter what we offer, it is enough for God to work with and make miracles happen in this broken world.

May we have the faith to bring what we have and who we are, however small it may seem, to those problems and tasks that feel so insurmountable faith and hope feel hard to come by. May we remember Saint Andrew, that even though he couldn’t see how the problems and hardships might be addressed, he gave what he could, putting his faith in the unconditional love of God to do the rest with what little he had to offer. May we find it within our hearts and minds to hold fast to our faith in times of doubt and discouragement, and may we, like Saint Andrew, become beacons of light to others as we walk this journey with Jesus.