I don’t like doing things badly in front of other people.

I really don’t like doing things badly with a bathing suit on in front of other people.

This was the set of parameters I had to work with for my Annual Discernment of Kit’s Lenten Practice this year.

These particular ones came about during a particularly dark moment nearly nine months ago when my daughter and I got into a rip-roaring exchange about her swim class. I had paid for it. I had her bathing suit, cap and towel in hand. She did not want to go. She did not care that I had everything ready and that we were now “running late, come onnnnnn, let’s goooo, in the car now!”

Meltdowns were achieved by both of us in historic proportions. Finally, she sat on our front door step, next to me who had already given up and was sitting there, head in hands because the minute hand on the clock had told me that there was no chance that we were making it in time or even noton time now. She took her belly breath.

It’s okay, kiddo. I don’t like putting my face in the water either, but we can learn to do hard things so they don’t scare us so much… Is what I should have said. But I didn’t. And the fact that I didn’t stuck with me.

Somehow, between the professional nature of my job, and the authority I seem to possess as a parent of two preschoolers, I’ve forgotten what it’s like to be a beginner. Someone who isn’t good at everything; who occasionally has no right answers; who chooses to do things they are not good at simply to try them. Adding to this, using precious time on things which are neither necessary, nor explicitly productive, hovers as close to heresy as a suburban working parent can get.

Sure, I mess up (a lot), but I don’t do it on purpose. For instance, I do not spend good quality time on things I’m not good at and may never be good at just for the heck of it. My fragile flower of an ego couldn’t handle that kind of nonsense. And in front of a whole class? No. way.  But I carried that front door step conversation with my daughter in my head for nine months and Lent was the time to do something about it.

In mid-February, I found myself signing up for an adult swim class. Eight sessions on winter Thursday nights from 8:15 – 9:00 pm (which is another level of hell for a tired parent, but that just enhances the feeling of atonement and sacrifice, amiright?).

I, personally, don’t like putting my face in the water. I don’t do it well, and it’s hard. My Lenten discipline begins with handing kids off for bedtime to my spouse as soon as he walks in the door, gathering my bathing suit, swim cap and towel, along with every reason why I should skip *just this week,* and making my way to the nearby Y to meet up with three other adults/almost adults who are also learning to swim better.

Echoes of Jesus telling his disciples that they must become like children to enter the kingdom of heaven have accompanied this swim class discipline. I would like to say that each week has been easier as I’ve gone along, but it hasn’t. Each week has presented a new set of challenges and big and small failures, and I have, more often than not, wanted to sit on my front step and sob that I don’t wannnaaa goooooooo. 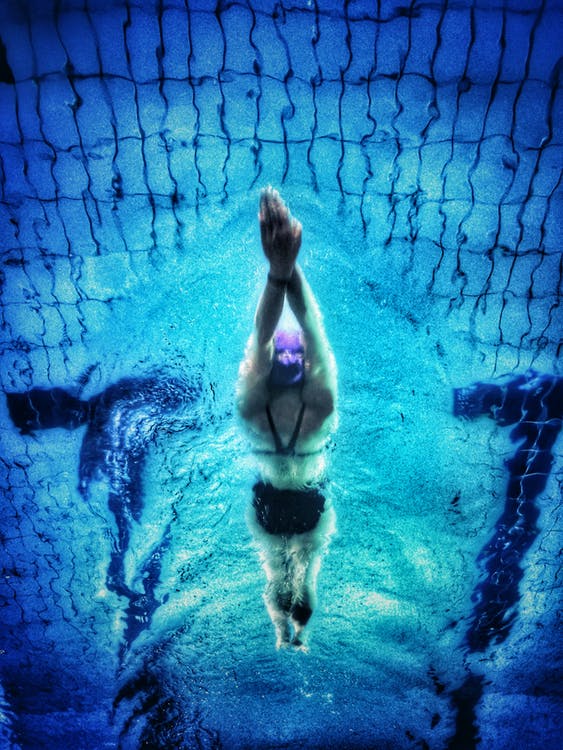 Lent for me has almost always been about the bigger picture: how to re-orient my life, my prayer, my attention to God and the gifts God has given me. However, the bigger picture has never been easy to negotiate in the latter part of the season, when life gets busy and I’m not always attentive. This year, I am doing something which requires money spent; time allocated; childcare established; and a perfectionist-shattering frame of mind. I have become a beginner again. And it’s one of the hardest Lenten practices I’ve ever taken on.

But there are moments of grace. Like when I first slide into the pool and the water closes in over my head and wonder if this was how baptism felt like hundreds of years ago. Or when I lie on my back in the water and think about how funny it is that that humans can just float. Or when I get that one series of breaths right, even if during the rest of the lane I’m a flailing octopus. Manna in a desert on those late Thursday evenings.

And best yet, my daughter cheers me on every time I leave the house with my swim bag in hand.