Earlier this year, I met a friend for a remarkable lunch. A relatively new church goer, she had heard a sermon on the beatitudes and wanted to speak with me about whether we Christians were really serious about trying to live that out. While we talked about how it might apply to a range of issues, including vocation, we eventually turned to what the beatitudes might mean as she and her husband decide where to send their firstborn to school.

For context, it’s important to say that this conversation took place in Manhattan and that New York has among the most segregated public school systems in the country. She and her husband face an agonizing choice that many parents face in New York: whether to send her son to the closest public school – a school that is under resourced, middling in its test scores, with many black and latino kids – or send him to a private school where resources are abundant, test scores are high, but where there are almost no black or latino students.

The choice was hard enough as it is, and now we were adding the beatitudes to the mix.

Both the beatitudes and the harmful consequences of segregated schools were well known by Thurgood Marshall, who the Episcopal Church celebrates today. For in addition to being the first African-American justice on the Supreme Court, as well as a founding member of the NAACP legal defense team that argued Brown v. Board of Education, Marshall was a faithful Episcopalian. He was a member of St. Philip’s Episcopal in Harlem, located not far from where my friend and I had lunch. 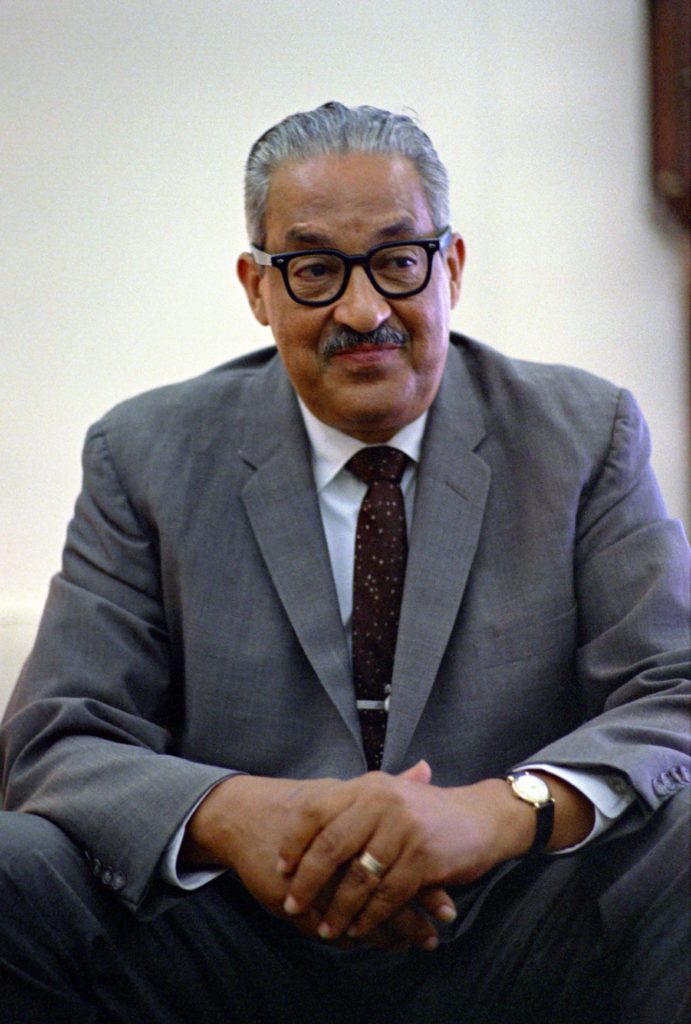 Drawing on the seminal work of another black Episcopalian, Pauli Murray, Marshall successfully argued in Brown v. Board of education that separate is not equal in a segregated public education system. One of the most haunting strategies Marshall employed is the way he drew on the work of educational psychologists Kenneth B. Clark and Mamie Phipps Clark to demonstrate how school segregation denigrated black children’s sense of self worth.

This landmark case and the Supreme Court’s 9-0 decision led to the enforced desegregation of public schools as well as one of the most iconic images of the 20th century: that of Ruby Bridges headed into a public school flanked by United States Marshals; a black schoolgirl protected from angry, white segregationists.

Of course, when I was growing up, I learned that the Brown v. Board decision was definitive. But if New York is any indication, the reality is we’ve a long way to go before achieving Marshall’s dream.

Like so many other vestiges of America’s racist history, segregation in schools hasn’t disappeared so much as it has reinvented itself. Even the idea of integrated schools as a value seems to be losing ground.

While many of us grew up horrified by the segregationists protesting Ruby Bridges, this level of vitriol is hardly in our past. Last year, wealthy, Upper West Side parents verbally attacked public school administrators on their efforts to diversify the school’s population. The New York Times recently highlighted how a top public high school only accepted eight black students in a class of 895, with significant protest resulting when the school – apparently embarrassed by the article and subsequent outcry – decided to make space available for a few more.

Truthfully, it is difficult and downright disheartening to realize how profoundly segregated our public school systems remain despite the remarkable life and legacy of Thurgood Marshall. Not just parents, but all of us, must take a hard look at ourselves and our communities and ask ourselves why this is still the case today and whether segregated schools truly reflect God’s vision of a more just future.

How do you see yourself contributing to this system of school segregation?

In your context, what would it look like to support a truly integrated local school?