Ever since I returned to the church in my twenties, I have been inspired by the Blessed Virgin Mary. From being singled out to be the God-bearer to witnessing the brutal execution of her son, she didn’t have an easy life. I sometimes imagine Mary, walking along next to me, offering strength of character and practical advice. I’m guessing that she had plenty of both, and that the traditional ‘meek and mild’ characterization serves a purpose of the patriarchy more than reality.

I’ve seen shrines and altars in parts of the world where Mary is venerated in such a way that, if you didn’t know Christian doctrine already, you would think that a goddess was being worshiped. Places where a painting or a statue—sometimes one that looks more like a doll in a glass case than anything else—is surrounded by votive candles, flowers, and other offerings. Some have offerings left in thanksgiving for some blessing bestowed by the virgin: a healing, a healthy baby, a successful job search. 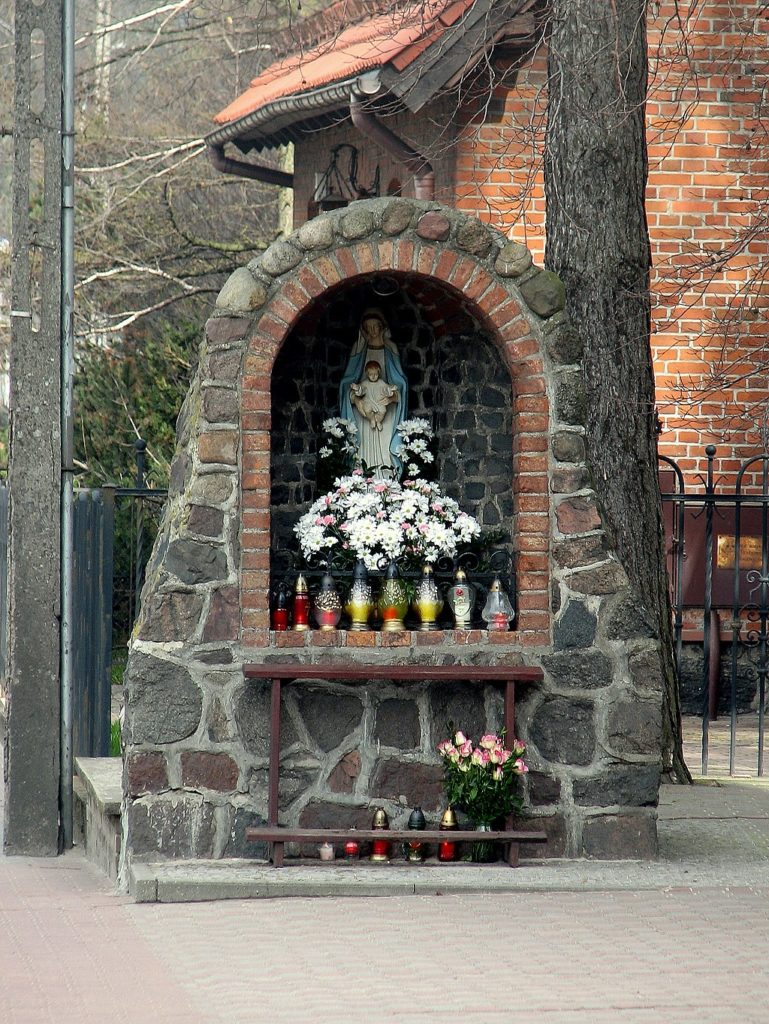 Shrine of the Blessed Virgin Mary in Reda, Poland, property of Public Domain via Wikimedia Commons

While I was in seminary, a student in my dorm lent me a novel that imagined the Blessed Virgin Mary in the present. She spent a few days staying in an apartment with a surprised agnostic single woman, taking a break between appearances to her devotee. One of the first things that Mary did in the story was to carefully remove all the milagros, small thank offerings, that had been pinned to her skirt by the faithful. She kept them all and treasured them, remembering the story behind each one. This Mary is a figure who holds a gentle, loving authority, powerful through her support of others. She contrasts the image of a masculine God who commands obedience through the threat of eternal flames and damnation.

I know which one I would choose.

But these are the thoughts of a white, middle-aged woman. I wondered what thoughts my fourteen-year-old son might hold. As it turns out, not so many. Which is, perhaps, not surprising given his situation. He is a double priest’s kid (both parents are Episcopal priests) and spent nine years in weekly Catechesis of the Good Shepherd sessions, in which he learned the stories of Jesus’ life and much more.

When I asked him about the Virgin Mary, he said ‘you mean, Jesus’ mother?’ and then went on to say that that was all he knew about her. When I pressed him, reminding him of the stories that he knew (Annunciation, Visitation, Nativity, Presentation, and so on), his response was ‘well, I thought all that was taken for granted.’

Many thoughtful people find their faith challenged when they contemplate the virginity of Mary and the virgin birth. It can even be a doctrine that drives people away from Christianity, because they find that they simply cannot believe Jesus was conceived in Mary’s womb without benefit of human sperm. My son, though, didn’t seem to be fazed by the virgin birth.

We did have an amusing back-and-forth about what a virgin actually is, with circumlocutions on his part (‘someone who shouldn’t be able to have a baby’) and direct language on my part (‘someone who has never had sex’). I offered that the word translated as ‘virgin’ in our Bibles could have originally meant ‘young girl’ rather than the definitions we had each come up with. That didn’t seem to interest him either.

At the end of our conversation, I asked how he thought a virgin could have a baby. ‘Well,’ he answered, ‘if God can raise Jesus from the dead then God can zap someone so they have a baby.’

My son and I see Mary in different ways, but for both of us she is a window that leads us to God. My son sees Mary as a willing cooperator with God’s power, which is strong enough to create a baby when biology and logic tell us there should be none. I see God working through the strength, love, and determination of Mary when she said ‘yes’ to God and then faced the consequences of that ‘yes’ for the rest of her life. I see that reflected in the devotion that so many people have to Mary. She offers them kindness, healing, and a gentle approach toward the Almighty Father who can be intimidating.

I think that Mary would be pleased with what each of us sees. She dedicated herself to serving God without ever seeking recognition for herself. She would probably be surprised at having a feast day celebrated by people all over the world. Mary herself pointed to God, after all, ‘My soul proclaims the greatness of the Lord; my spirit rejoices in God my savior.’