Modern parenting has no shortage of overthinking things, and in particular, no shortage of overthinking holiday celebrations. This recent New York Times Parenting piece illustrates that I’m not alone when I try to be deliberate about our holiday celebrations. I’ve tried to balance our Christian faith with the secular narrative of Christmas, not trying to pit the two against each other or shut one or the other out, but making room for both in our family life. My husband is an ordained clergy person, and I’m hyper-aware (as a clergy kid myself) that clergy families can experience the stress of being “different,” and not always for good reason. We play Christmas carols through Advent, which curls the hair of some of my friends and family who would prefer to wait until the Christmas season officially starts. Santa fills my kids stockings, with an explicit message from us that their behavior didn’t “earn” them any gifts.

One place that I had a hard time finding balance was the cultural phenomenon that exploded around the time that our oldest son was born, the Elf on the Shelf. People seem to have a love/hate relationship with this little guy, for various reasons. I understand the whimsy and fun that it brings to many households, and I also understand parents’ reluctance to remember to move the godforsaken thing every night, especially at a time of year when it feels like we’re all ready to drop into bed as soon as the kids are asleep. My objections to the elf ran more theological: the tattletale reckoning of who’s been “bad” or “good,” and how it relates to the gift of Christmas.

One could say that, like our Christmas carols in the car that begin after Thanksgiving, the sacred could be separated from the secular. But the whole message of Christmas, to me, is that Jesus is a gift that none of us deserve. None of us could possibly be good enough to be on the “nice” list that would earn us Jesus’ redemption. The elf represents the polar (heh, sorry) opposite of what we believe about Christmas.

And so, imagine my dismay when my then-7-year-old came downstairs one night when he was supposed to be sleeping to ask me why WE don’t have an Elf on the Shelf. His classroom had one. His friends had one. What about us?

He had a point, and I hate to be in the business of denying my kids a magical experience.

Explanations to disgruntled second graders at 9:30 p.m. are not my favorite thing. But the Holy Spirit must have been with me that night when three woolen figures caught the corner of my eye.

The wise men figures were a gift from a clergy colleague of my husband the year before. They are whimsical and fun, like the friend who gave them to us.

“I wonder if they have something to say?” I said to my son as I shuffled him back up the stairs to bed.

My husband and I found an unused faux-leather-bound journal and began the story of our very own three wise men. They are named Moltmürgen (for Jürgen Moltmann), Williamswan (for Rowan Williams), and McCallavid (for our friend, David McCallum).

For every night in Advent, they write in a fancy script in their “travel journal” about what they see in our home. They bicker among themselves. They get into the chocolate. They are bit clumsy. They are afraid of our dogs. This year, they found every copy of “We Three Kings” among our piano books (who knew there were so many versions?), and spread them out all over a table. They consult astronomy texts. They talk about how they seek the light of Bethlehem, and they are seeking God’s light in the world. In that way, they rejoice when we sit down to a family meal together. They delight when we make music. They observe our frustrations and our struggles, and they seek the light with us. 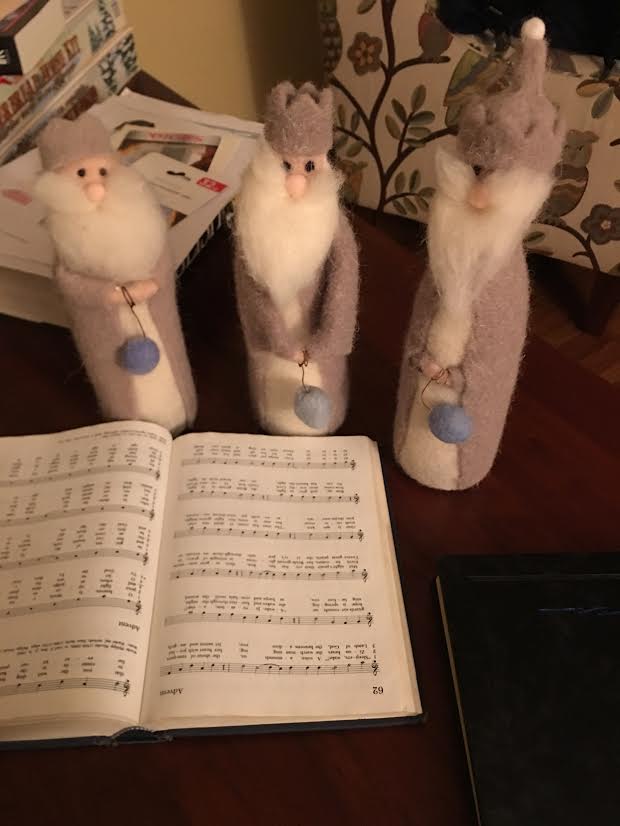 That first night, I wasn’t sure if the Three Wise Men would “take,” and if they’d be an adequate substitute for the elf in my son’s eyes. They have been that, and so much more, and now I have several years’ worth of journals that “they” have written to my children, chronicling our daily life.

That second grader is now in sixth grade. We told him recently about Santa, and he looked forward to helping me on Christmas Eve, filling everyone’s stockings with me. He came downstairs after his little brother fell asleep, and we came up with a plan. “First,” I said, “we need to move the Wise Men.”

Even after he’d been told all about Santa and the Easter bunny and the tooth fairy, my sweet son still wanted to believe that the Three Wise Men magically moved around our house for a month every year. And why wouldn’t he want to believe that? They are pretty magical.

We’re well aware that the story of the three wise men has been extrapolated from the original biblical narrative of the Feast of the Epiphany. We know that we don’t know a whole lot about these visitors to the Christ child. But we know what it is to seek light in a dark world, and we are grateful for these whimsical reminders that we are not alone when we seek Jesus.