We are three days into the Good Book Club and so far, we are batting three for three in the Liles household. It feels like a heroic accomplishment during this first week back to school after winter break.

Thanks to Melody Wilson Shobe’s post two years ago, we have the right Bible for our children’s comprehension level. Thanks to Forward Movement, we have a printout of the daily readings from the Gospel of John. The latter even includes a column where we can note the family member who gets to read the text, allowing us to evenly distribute our nightly lectors. The column is really there to note feast days, but evidently in my house we argue over whose turn it is to read, so we’ve created our own use for the blank spaces. I offered a prayer two nights ago that my kids might always use the phrase ‘gets to read the Bible’ rather than ‘has to read the Bible.’ 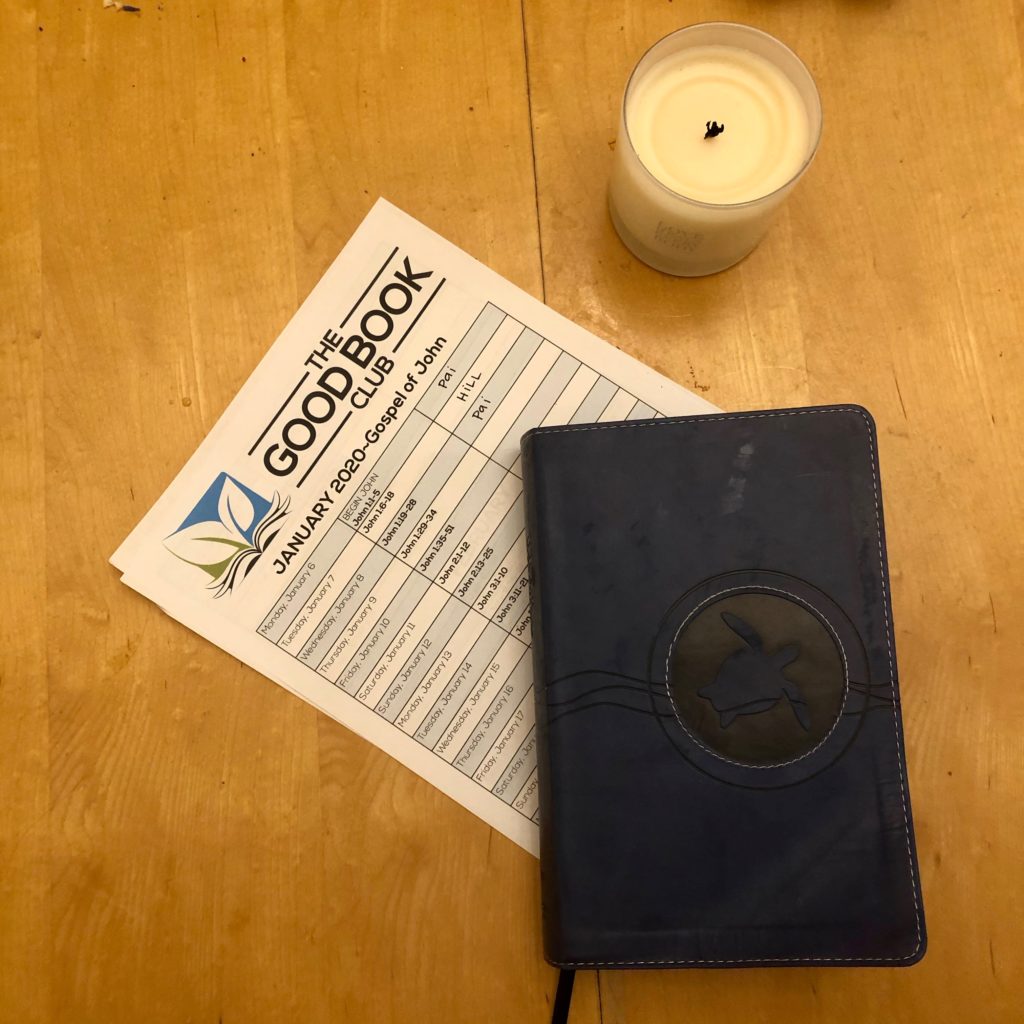 Monday night we began with our eight-year old-daughter reading, “In the beginning, the world was already there. The world was with God and the world was God. He was with God in the beginning.” My husband and I eyed each other across the dinner table. This Adventure Bible does tend to translate things a bit differently than we are used to from our NRSV Bibles, but before we could say anything, our ten-year-old piped up, “I think you meant to say ‘word’ all those times you said ‘world.'”

My husband passed the Bible to our son and asked him to read the very first verse in the entire Bible. He flipped back a few thousand pages and read, “In the beginning, God created the heaves and the earth.” We talked a little bit about how the New Testament authors often echoed words their audiences knew from Hebrew scripture. This came up again just last night when we heard John the Baptist use Isaiah’s words, “I am the messenger who is calling out in the desert, ‘Make the way for the Lord straight.'”

This was the inaugural Good Book Club’s gift to our family way back in 2018. When our we read continuous stories on consecutive nights, we made connections with and for our children that otherwise would go undetected. Most of the stories they heard in Luke’s gospel that first year were familiar to them, but they had never heard them day after day after day after day. It brought a depth to our family conversations around Jesus and his ministry that we’d never experienced before.

But last night we discovered another gift of the Good Book Club. 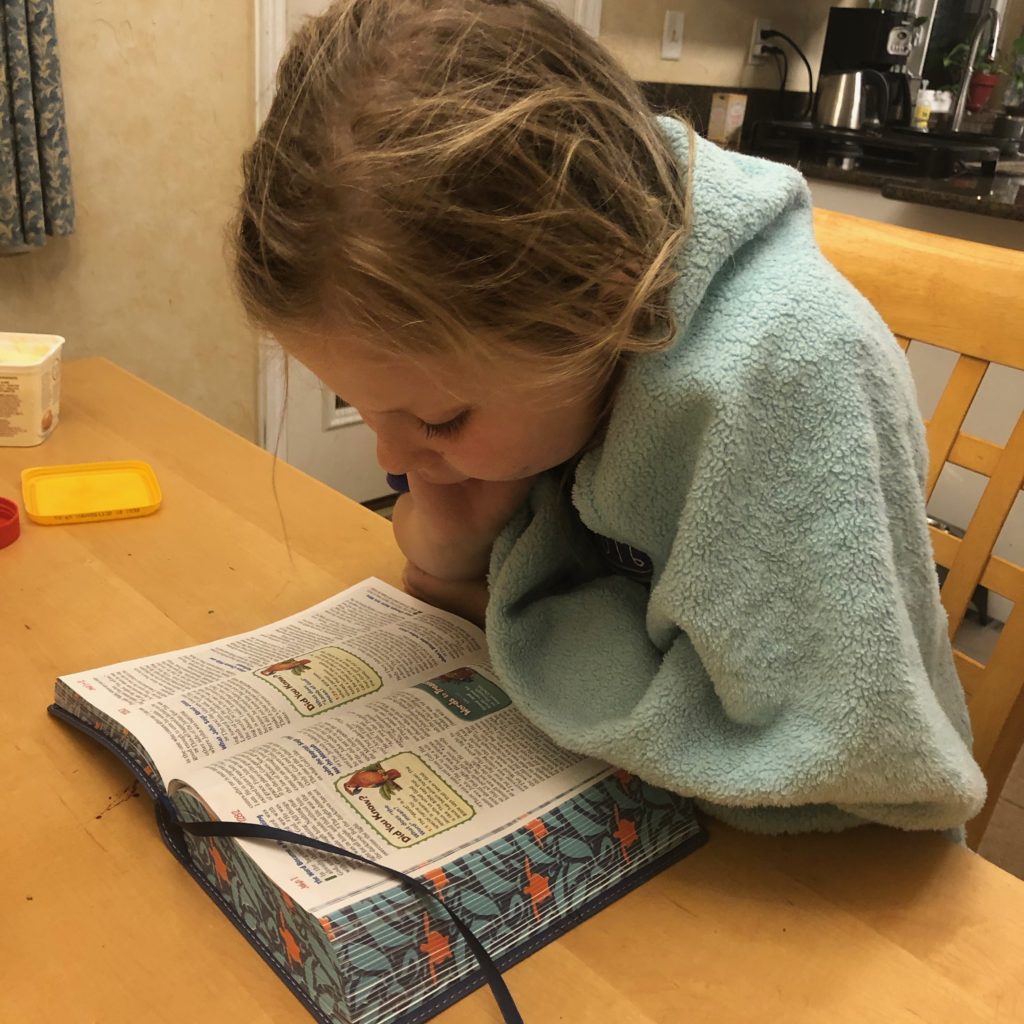 After our daughter read John the Baptist’s declaration that he was neither Elijah nor the prophet they expected, but instead he was the messenger for one who is coming after him, we asked what all they heard in the text. Our daughter spoke first, because she always speaks first, echoing the words she just finished reading. “The were wrong about John. He wasn’t who they thought he would be and they were confused.” I asked who John the Baptist was if he wasn’t who they were expecting and and she told me he was Jesus’ messenger. I then commenced my teaching about the New Testament authors using familiar texts from Hebrew scripture.

Then our ten-year-old said, “But it wasn’t just the Old Testament. Messengers have been around for thousands and thousands of years, like back to mythology times. Mercury and Hermes were the messengers of Roman and Greek gods way before Isaiah was a messenger of the Lord.”

There it was. In this season of the Good Book Club, it’s not just the priest parents imparting our vast amounts of biblical wisdom onto our young children, now those children are offering us their own wisdom. The amount of Rick Riordian books my son has consumed over the past two years easily makes him the resident expert on all things mythology. We turned the floor over to him and he shared everything he knew and was willing to share about Hermes. Turns out Hermes enjoyed quite a colorful life, and when our son felts his cheeks blush, he decided he didn’t need to teach us everything.

It was enough to remind me that even though my husband and I have three theological degrees between us, we are not the sole teachers  in this family. Our children have likely attended more formation classes in their short lives than I have in all of mine. The lessons learned from Godly Play and Catechesis of the Good Shepherd, combined with their fair share of lived experiences, are going to deeply enhance our family’s participation in the Good Book Club this year. I am truly eager to see what else they have to teach us.

How have children deepened your understanding of biblical stories?

How is the Good Book Club going in your household?