The best scene of the best episode of Netflix’s “The Crown” is Queen Elizabeth II’s coronation in “Smoke and Mirrors” (the fifth episode of the first season). We see the 1953 coronation through the eyes of Elizabeth’s uncle David (Prince Edward), who had abdicated the throne in 1936 before he was crowned. For a variety of reasons, he’s forced to watch the coronation on television and, surrounded by non-royal friends, he does a sort of play-by-play of the event. It’s both fascinating and an acting tour-de-force by Alex Jennings.

The most powerful part of the scene is a moment that television viewers were not allowed to see: the anointing. As the television broadcast cuts to a view of Westminster’s altar and reredos, the new queen is surrounded by four Knights of the Garter carrying a golden canopy. Just as the camera cut is intended to shield the anointing from the eyes of the general public, the canopy is meant to hide it from those attending live. “The single most holy, most solemn, most sacred moment of the entire service,” Prince Edward tells his friends. The Archbishop of Canterbury administers an oath to the monarch and then anoints her with holy oil saying,

The major elements of the English coronation including the earliest versions of the oath were first written and collected by Dunstan, Archbishop of Canterbury, when he crowned King Edgar in 973. 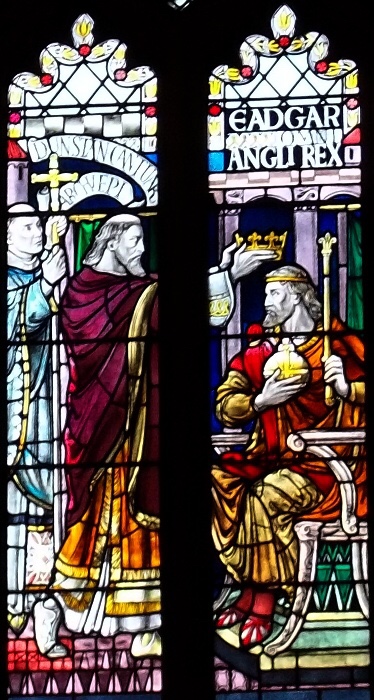 But before Dunstan was writing coronation liturgies and crowning kings, he was a monk in Glastonbury. Rising in prominence because of his value as a counselor to several English kings, he was eventually consecrated as Bishop of Worcester and London. During his life he re-established many monasteries that had been sacked by Viking raids and became a beloved English saint whom our Church commemorates today.

In Dunstan we have a paradox of public and private that I’m really feeling during this extended period of time at home with my kids. When it comes to spirituality, I, like many, find myself hiding it under a canopy. Like the anointing of the Queen of England, it’s private. However, Dunstan, a monastic throughout his life, balanced his private devotions with a willingness to engage the political realities of his time, something in which he obviously had a lot of skill. In his reestablishment of the monasteries, we see that his private devotion directed much of his political life. When I study his life, I feel invited to see my spirituality as something less private, especially as I travel through difficult times with my family.

In the theology of the coronation, the anointing of the English monarch is the most important part of the service because it is the most real thing that happens. The monarch’s rule is invested with that spiritual connection and thus the source of her rule is God. (However, Monty Python would like to remind us that “supreme executive power derives from a mandate from the masses, not from some farcical aquatic ceremony.”)

Dunstan shows us (through his life and through the coronation ritual he created) how private devotions should lead to outward service that transforms the world into something more like the reality understood through private devotion. Dunstan would have been a big fan of Presiding Bishop Michael Curry’s ever-present reminder that it’s not our job to turn the world upside down, rather we are called to turn an upside-down world right side up.