In one of the premarital counseling sessions with my wife, the therapist asked us about gender roles in our relationship. Who does most of the cooking? What about the yard work, the cleaning, the household shopping, the calendar planning? As he went down the list of jobs, we kept answering, “we both do.” Rather than being impressed by our modern relationship, he instead cautioned us to be mindful of these roles as we welcomed children into our household.

Over the past fourteen years of our marriage, my wife Allison and I have alternated being the lead income earner and the lead parent. Though, perhaps not changing as much in recent years as either of us would prefer. Like many of our peers, we deeply believe that marriage is a partnership and that both of our contributions are vital to the well-being of our family.

We often think that marriage roles have been determined by gender throughout history, but the New Testament tells us otherwise. Today our church commemorates the life and ministry of my favorite biblical co-laboring couple: Priscilla and Aquila. We first meet them in Acts chapter 18 in the city of Corinth. As Jews they had been forcibly displaced from their home in Rome by an edict from Claudius. Paul meets Priscilla and Aquila, and quickly learns of their shared trade. A friendship is formed and perhaps a tentmaking business partnership, too. Paul stays with the couple for 18 months where they minister together and spread the gospel.

Whenever Paul addresses them, he does so as a couple without any sense of gendered hierarchy. Sometimes Paul says Aquila and Priscilla and other times it’s Priscilla then Aquila. It’s clear that they are a team, equal partners. It’s also clear Paul isn’t deterred by Priscilla’s gender, he instead praises them both as helpers in Jesus Christ. She and her husband together teach the early church evangelist and preacher Apollos; they help deepen his understanding of Jesus Christ. They work and witness together in the name of God, perhaps even writing about their experiences in the Book of Hebrews. 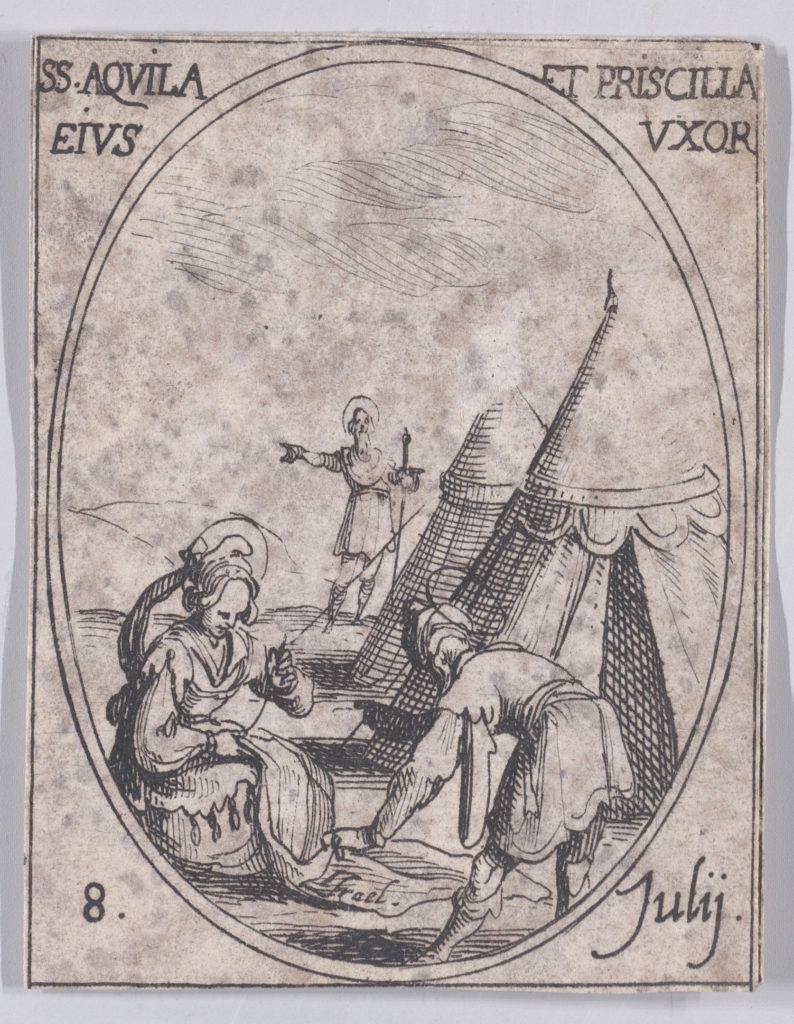 Their partnership and shared ministry cause me to pause and reflect on my own marriage. What began as a relationship void of gender roles has begun to look more and more like a stereotypical 1950’s marriage during this quarantine. We began this physical isolation thinking all of this time at home together would help divvy up our domestic responsibilities like in the early days of our marriage, but instead they’re dividing more deeply along gender lines. The expectations of my job are the same as they were pre-COVID (perhaps with even added responsibilities), while my wife’s church members view caring for our family as her top priority. They’ve offered her a tremendous amount of grace with the expectation she’ll be carrying out more unpaid labor at home.

This pandemic magnifies all sorts of existing inequalities in our world, specifically in employment. Women are still paid less than men and men aren’t granted the same flexibility from their employers as women. In our family and perhaps yours, it’s meant my wife taking on the majority of the cooking, caregiving, and housework work we had been sharing. I know how fortunate we are to have her job still compensating her financially even if her output isn’t what it was six months ago.

As we celebrate Priscilla and Aquila today I hope you will join our family in having conversations about roles and household duties. Making sure each member of the household learns how to do a variety of tasks  ensures the next generation’s struggles for gender equality will not be as difficult as it has been thus far.

[Image Credit: Public Domain via The Metropolitan Museum of Art]