“Thank you for grooming one of my lambs.”

A scene from that quirky 1993 movie Household Saints had been on my mind, and I found myself watching well beyond the part I intended to revisit. I made it to the scene in which devout, young Theresa has a vision as she irons her friend’s (hideous) shirt: Jesus himself has come to keep her company! Movie Jesus, with his British accent and blue eyes, a thorny crown nestled into his blond curls. Jesus, who admits to being tired of wearing the same robes he was buried in (keeps the angels from getting sentimental about humanity), thanks his devoted servant for tending one of his lambs.

“Your child mentioned she doesn’t have her composition books yet. We’ve begun using these to take notes.”

Having a little trouble keeping my own lambs tended, it seems. The email from the teacher several days into their first week was thoughtfully worded, with an offer to provide supplies if helpful. My fourth grader had reminded me that she needed a few items—the school list had been revised in light of virtual learning, and I’d started the task online but hadn’t followed through. She wasn’t embarrassed or behind, just mildly annoyed at Mom’s lag time. I’m glad for her confidence in speaking up for herself, telling her new teacher what she needed.

Sometimes the last minute is the only minute you have. I haven’t forgotten the Valentine’s Day the year—actually, the week—we moved across states to our current home. That was a 9pm trip to Walgreen’s for whatever they still had the night before the class party. I snagged the emoji-themed box, only to discover later that they were all emojis puking rainbows. Here, kiddo, make friends. Perhaps some other children like vomit, too.

Today, September 8, is the Feast of the Nativity of the Blessed Virgin Mary. For many, it’s a day of devotion to Mary, celebrating an innocence that reads as suitability for her later calling as the one to whom Jesus was born. The feast is celebrated across many cultures, often involving harvest thanksgivings, with festive meals of grains, vegetables, and fruits. Images might include scenes of Mary’s birth, or depictions of her as a toddler or child. Apocryphal stories tell of her parents Joachim and Anna, whose lament for a child results in the birth of Mary as a blessing and an answered prayer. 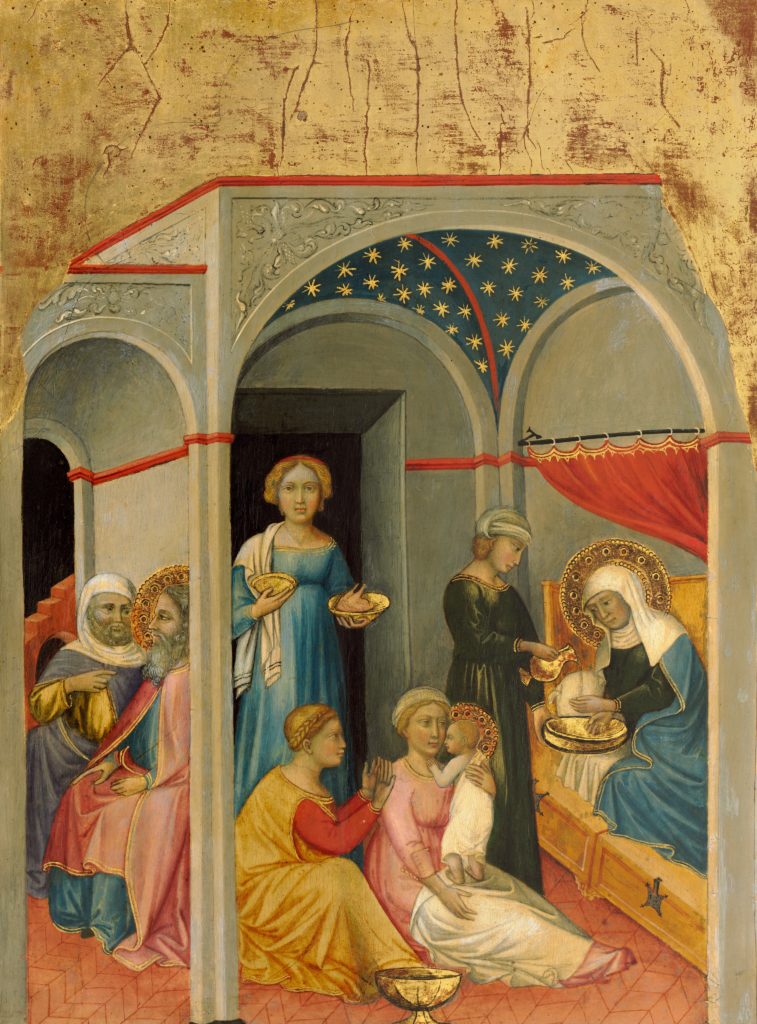 Andrea Di Bartolo, The Nativity of the Virgin. Public Domain via National Gallery of Art

The care with which Christian tradition has treated Mary’s origin story interests me; there is plentiful and sincere devotion to the idea that the mother of Jesus was herself extraordinary, even from conception. That to be worthy of bearing Jesus, she was like no one else. Hold that thought—it’s not a light one.

In a tender scene in Household Saints, an elementary-aged and very pious Theresa is heartbroken that a spiritual gift she had hoped for has not come to pass. Her mother—impatient with religion’s spotty record on answered prayers—takes her daughter’s pain seriously. She recounts something the nuns told her when she was growing up, an imagined scene in which Mary grabs the wing of the angel Gabriel as he turns to depart after the Annunciation.

Mary: Excuse me, but this thing that is happening to me, is it a miracle?

Mary: And this baby that I’m giving birth to, will that be a miracle too?

Gabriel: Oh, yes, that’s always a miracle, but this birth will be the greatest one of all. You know, Madonna—miracles are all around us, but life is too short to sit around and wait for them. We are the ones who must seek them out.

I love this scene, where skeptical mother meets wholehearted girl. Mom is both authentic and generous, moving toward her daughter. Are we ever worthy of our children? We do the best we can. And our children challenge and astonish us, miracles that they are, inviting us to meet them in an unselfconscious place. To trust, to delight, to believe.

I completed that order of missing school supplies so things would be ready for school in the morning; it was a dumb, small order. I had to (had to) include donuts and a baby toy to reach the minimum threshold for delivery.

It was almost 9pm when the goods came. The kids were in bed, the baby sleeping, a good soul had shopped on my behalf. On the porch next to my Target bags was a handwritten note from my Shipt shopper, with a bag of cookies and bottle of hand sanitizer. Humbling. 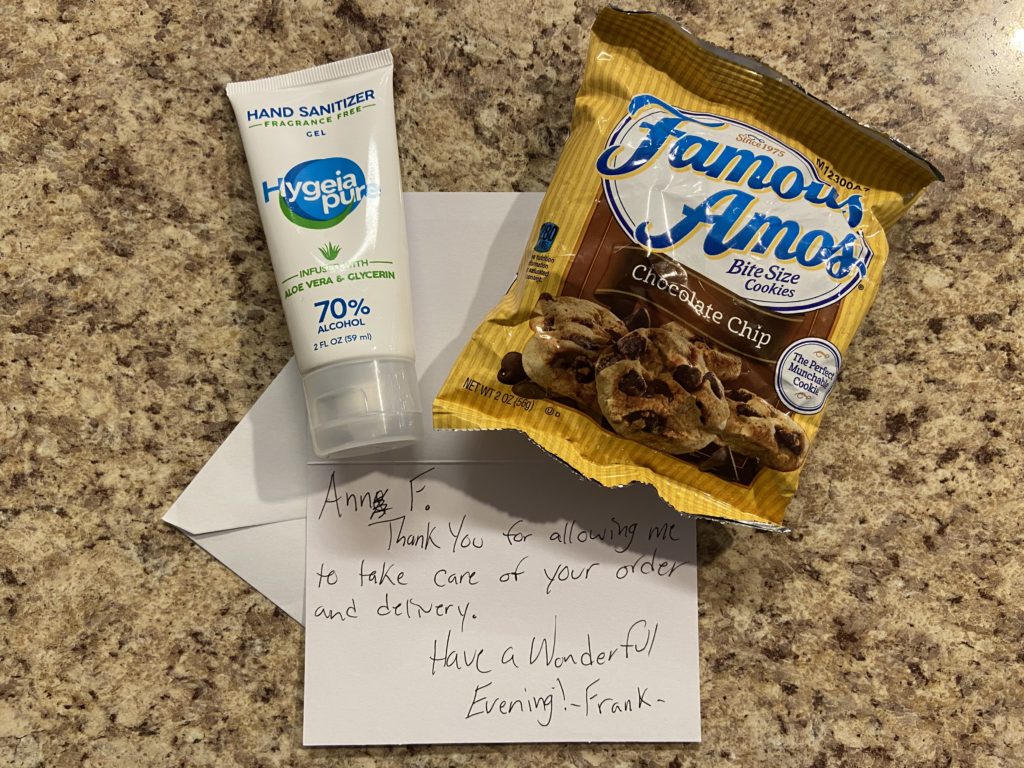 Thank you for tending my lambs. Movie Jesus had multiplied the shirt Theresa was ironing like loaves and fishes until there were hundreds of red and white shirts everywhere, a blessed miracle sought and found in the ordinary task at hand.