“Pizza is my favorite food, too.”

It was during an un-moderated Zoom breakout session when I heard this strange un-truth proclaimed from my first grader. Her group had been given the direction to find one thing all four had in common, and one thing which was different. It was a solid attempt by the teacher as a ‘get to know you’ game coupled with ‘can they survive in a Zoom breakout room without chaos ensuing’.

Fully failing to avoid helicopter parenting, I started to listen in on this conversation. Pizza was *not* my child’s favorite food. I mean, she enjoys it, as much as she might enjoy a PB&J or goldfish crackers—these are ubiquitous items which are part of our food pyramid at home, and therefore hardly stand-out meals. She loves sushi and noodle soup and popcorn and vanilla cupcakes.

But here she was, avowing her faithfulness to pizza. Even with some gusto.

She knew it wasn’t true, because as I looked over at her in the midst of these conversations, this six-almost-seven-year-old darted me a glance straight out of the pre-teen years, and mouthed, STOP. I KNOW. And shrugged. The pressure to just fit in with the group, and thereby making the process of intentional co-existence easier, had begun.

There is very little in common between my daughter and Thomas Cranmer, who served as Archbishop of Canterbury during the first part of Henry VIII’s reign and was martyred in 1556 at the stake as a heretic. If they were in a breakout room on Zoom trying to find commonalities and differences, it would take a long time. But what remains is a powerful instinct on every level to conform for the sake of ease.

Thomas Cranmer was a surprising choice for Henry VIII’s appointment to Archbishopric. A cleric who had served only in “lower positions” throughout his career, he was appointed to the team of English clerics to discuss how to dissolve the marriage of Henry to his (first) wife Catherine of Aragon. It was Cranmer’s idea to poll not only clerics, but theologians throughout the continent about their understanding of both the scriptural and theological claims Henry could use to his advantage.

Not quite the most noble foray into court politics, Cranmer was to spend the rest of his life negotiating the fine line between upholding the notion of the sovereign as head of the church in their own jurisdiction and disagreeing personally (and mightily) with the direction of such a sovereign, as they changed their minds, or changed person entirely.

Endorsed by the Boleyn family as Henry was courting Anne, Cranmer found himself the inheritor of Reformed theology from his time with the scholars and theologians in Germany, Switzerland, and the Netherlands as he posed them the quandary of Henry’s proposed divorce (the Reformers were split on that one, by the way). Scripture, Cranmer began to believe, should be accessible by the lay people. Liturgy should be a shared experience. Priests should be able to marry (which he did, himself, while abroad).

Henry VIII was not the most consistent monarch to serve. His enthusiasm for the reformation of the English Church oscillated not inconsistently with the religious tenor of his current wife (Catherine of Aragon, Catholicism; Anne Boleyn, Protestantism; Jane Seymour, Catholicism; Anne of Cleves, Protestantism) and his energy (read: finances) for conflict with Rome. Such a supervisor must present challenges for productive employees, when disapproval often led to their death.

Throughout this time, Cranmer sought out a variety of liturgical materials from England, the continent, and prayers even from the Orthodox tradition, with an eye to creating a universal liturgy—a Book of Common Prayer—for the people of England, in which they could read and participate. Throughout the waffling of the ‘supreme head of the church,’ Cranmer kept gathering, writing and composing. His words, which Anglicans read and pray weekly, if not daily, have a timelessness which belies the volatility in which he lived.

His collects—roughly three sentences of prayer around a theme—are the hallmarks of his writing style, inclusive of a ‘Cranmerian triad’—‘read, mark and inwardly digest’ being a perfect example. His words and phrasing influenced English literature in deep and profound ways. In each of the Anglican Communion’s prayer books, we hear his words still-modernized occasionally, but timeless in their cadence and pith.

Cranmer lived long enough to officiate Henry’s final wedding, and outlived Henry himself. He thrived under the Protectorate of Henry’s only son Edward, but when Edward died young, the contested throne went to Mary, daughter of Catherine of Aragon, and fervent in the Catholic tradition. You can imagine how she felt about Cranmer.

With his death looming, Cranmer actually recanted his reformed ways (poorly though, and under duress). On the day of his death under Mary, instead of his public profession of contrition, he announced his belief in all that he had written and professed throughout his life, and that his hand which had composed the recantation, would burn first in the stake. And according to witnesses, it did. 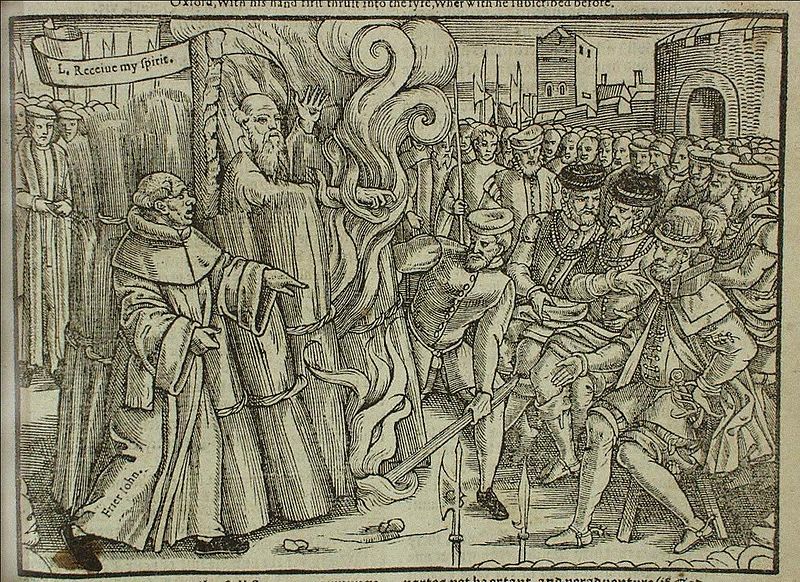 In volatile times, it is hard to remain constant in faith, never mind asserting one’s favorite foods in front of other six-year-olds who may think differently. The pressure to conform in order to remain in favor of those in power (or influence) can hold our hearts and souls in thrall. The witness of Thomas Cranmer reminds us that such steadfastness in what truly endures—the power to understand and participate in the grace of God as we are—can hold us and ground us, in such times.