Friends, we did it. We wrote a book.

For three years this Grow Christians community has worked together over the shared goal of deepening the faith of children in our care. We collaborate as parents, grandparents, and godparents, as children’s ministers, youth ministers, and clergy. We’ve shared our resources and learnings, leant emotional support and lamented challenging experiences. Nothing seems to be off the table for us, because we are in the thick of this ministry together. Our contributors are curious and creative, and even theologically profound. Personally, my faith and the faith of my children has benefitted deeply from Grow Christians.

In just a couple short weeks our first Grow Christians book will be published by Forward Movement. Consider it a ‘best of’ collection of our posts on feasts, fasts, and other holy days. Each entry features a familiar reflection accompanied by the readings for the day, a response activity to engage children of all ages, an opportunity to learn more, and a closing prayer.

Today is the Feast of Saint Luke the Evangelist, so I thought it was appropriate to share the October 18th entry from our book. I wrote this original reflection two years ago after just starting a new church call, and oh, how I miss the intimacy of laying on hands for healing right now.

Growing Christians: Celebrating Saints & Holy Days at Home is available for pre-order now and will be published on October 27th.  I hope you’ll buy a copy for your household and also for your church library. Thank you for your commitment to this community and your ongoing support of our shared ministry. 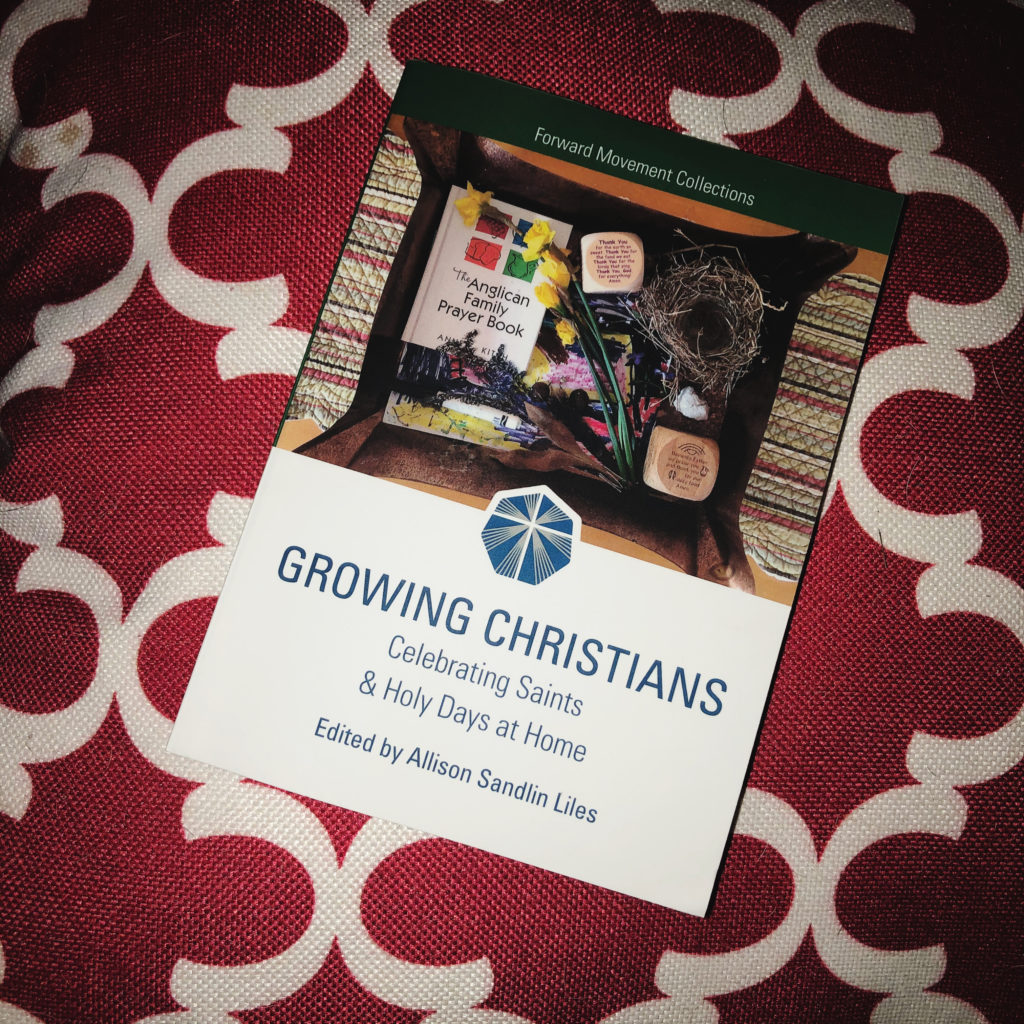 Several years ago, the church I currently serve decided to end their Wednesday healing service, opting instead to add healing prayers to the Sunday morning liturgy. I learned about it during my interviews when it was made very clear that this was a sacred tradition (albeit a new one) that was going to stick around. I began working at this church last month and each Sunday I must be intentional about including these prayers. I’m so used to moving straight from the post-communion prayer to the final blessing that on my first Sunday, I forgot it all together… and then heard about it during coffee hour. The following week I made notes in my personal Book of Common Prayer and the altar book reminding me to invite people forward for anointing and laying on of hands.

Those who desire this sacrament stand before me for anointing while surrounding church members lay on hands. One week no one came up; other weeks a couple of folks await anointing. The Sunday after Dr. Ford and Judge Kavanaugh testified before the Senate, we had a record number of people seek healing. One of those people was my seven-year-old daughter.

The woman seated next to her on the front row invited her to lay hands on a gentleman who came forward. My daughter cautiously stood up, took a few steps, and gently touched his arm. Then she laid hands on the woman next in line. And then, she stepped in front of me, looked up, and asked to be anointed.

This was only my daughter’s third Sunday at this new church. The first week, she and my son behaved beautifully. The second week, not so much. That week I shot her you-better- start-behaving laser beams out of my eyeballs while preaching. This third week, my son decided to sing with the choir, and my daughter set up shop on the back row with a stack of books. Then during the prelude, two people she didn’t know sat down on either side of her, and she fled to the sacristy. When she finally returned during the epistle reading, she walked to the front row and sat down so close to me that we could have held hands.

Like me, she’s still finding her way in this new church community. But something big happened during those healing prayers. She connected with fellow members while touching their arms and their hands touching her shoulders. After

church, she told me how fun it was praying for people who felt sick and then being prayed for herself. I caught her smiling in the mirror once we got home, checking to see if the oil she could still feel on her forehead was visible. The following week as I placed the communion host in her small hands, she asked me if she could also get the oil and blessing. Soon, I told her. Right after our thank you prayer.

Today is the Feast of Saint Luke the Evangelist, the person attributed to writing the biblical books of Luke and Acts. Luke is often described as a physician because of Colossians 4:14 where the author relays that “Luke, the beloved physician, sends his greetings.”

Physicians rely so heavily on their hands to detect problems in our bodies. Jesus relied heavily on his hands for healing people during his time on earth. On this feast day, I’m reminded of the role our hands also play in the sacraments of our church. Clergy touch the water in baptism, the bread during the eucharist, join the hands of couples getting married. Hands are laid upon the head for confirmation, ordination, and also upon those seeking healing.

A way to celebrate the Feast of Saint Luke today is to prayerfully lay your own hands on members of your household. You can hold a service of healing prayer and it need not be long or even formal. After dinner tonight, open with a prayer acknowledging God’s presence in your midst. Ask those gathered to share something that’s troubling them like an illness or school assignment or friendship or something at work. Then lay hands upon each other’s head, shoulders, or arms, and take turns saying a prayer to ask God for healing.

According to tradition, Luke was a physician and one of Paul’s fellow missionaries in the early spread of Christianity throughout the Roman world. He has been identified as the writer of both the gospel that bears his name, and its sequel, the Acts of the Apostles.

Luke seems to have either been a Gentile or a Hellenistic Jew and, like the other New Testament writers, he wrote in Greek, so that Gentiles might learn about the Lord whose life and deeds so impressed him. In the first chapter of his gospel, he makes clear that he is offering authentic information about Jesus’ birth, ministry, death, and resurrection, as it had been handed down to him from those who had firsthand knowledge.

Only Luke provides the very familiar stories of the annunciation to Mary, of her visit to Elizabeth, of the child in the manger, the angelic host appearing to shepherds, and the meeting with the aged Simeon. Luke also includes in his work six miracles and eighteen parables not recorded in the other gospels. In Acts he tells about the coming of the Holy Spirit, the struggles of the apostles and their triumphs over persecution, of their preaching of the Good News, and of the conversion and baptism of other disciples, who would extend the church in future years.

Luke was with Paul apparently until the latter’s martyrdom in Rome. What happened to Luke after Paul’s death is unknown, but early tradition has it that he wrote his gospel in Greece, and that he died at the age of eighty-four in Boeotia.

Gregory of Nazianzus says that Luke was martyred, but this testimony is not corroborated by other sources. In the fourth century, the Emperor Constantius ordered the relics of Luke to be removed from Boeotia to Constantinople, where they could be venerated by pilgrims.

According to Orthodox Christian tradition, Luke was also the first iconographer. He is traditionally regarded as the patron saint of artists and physicians.

Almighty God, who inspired your servant Luke the physician to set forth in the Gospel the love and healing power of your Son: Graciously continue in your church this love and power to heal, to the praise and glory of your Name; through Jesus Christ our Lord, who lives and reigns with you, in the unity of the Holy Spirit, one God, now and for ever. Amen.