I live in Newport, Rhode Island where there is a small but mighty Irish population that has been celebrating Saint Patrick’s Day with vigor for 65 years. The main event is the parade, which stretches a mile and a half through historic downtown Newport. The event has taken on a life of its own, with an estimated 50,000 people traveling to the city to raise a green beer to Saint Patrick. Most of us locals watch the parade from the very start of the route and then scoot home before things get out of hand.

Last year the parade was scheduled for March 14th, and it was the first major event in our area that ended up on the chopping block when COVID came to town. The City Council voted to have the parade and then the governor got real mad and then the City Council changed their minds and the people who planned the parade got real mad. It was a special time. I was relieved it was canceled, because can anyone say “superspreader”?

My kids, 3 and 5 at the time, had been looking forward to the parade and they were disappointed when it was canceled. We were in our first week at home together under a stay-at-home order when March 17th rolled around, and we decided that we could still celebrate and have our own parade. It was still early in the pandemic. My creative parenting juices hadn’t dried up and shriveled as they would in the coming months. We all dressed in green and grabbed or made instruments from around the house and then marched outside, circling our house multiple times while we blew into our horns and banged on cardboard boxes. I missed the bagpipes, but thought we did a pretty good job. And no one got arrested, so that’s a win. 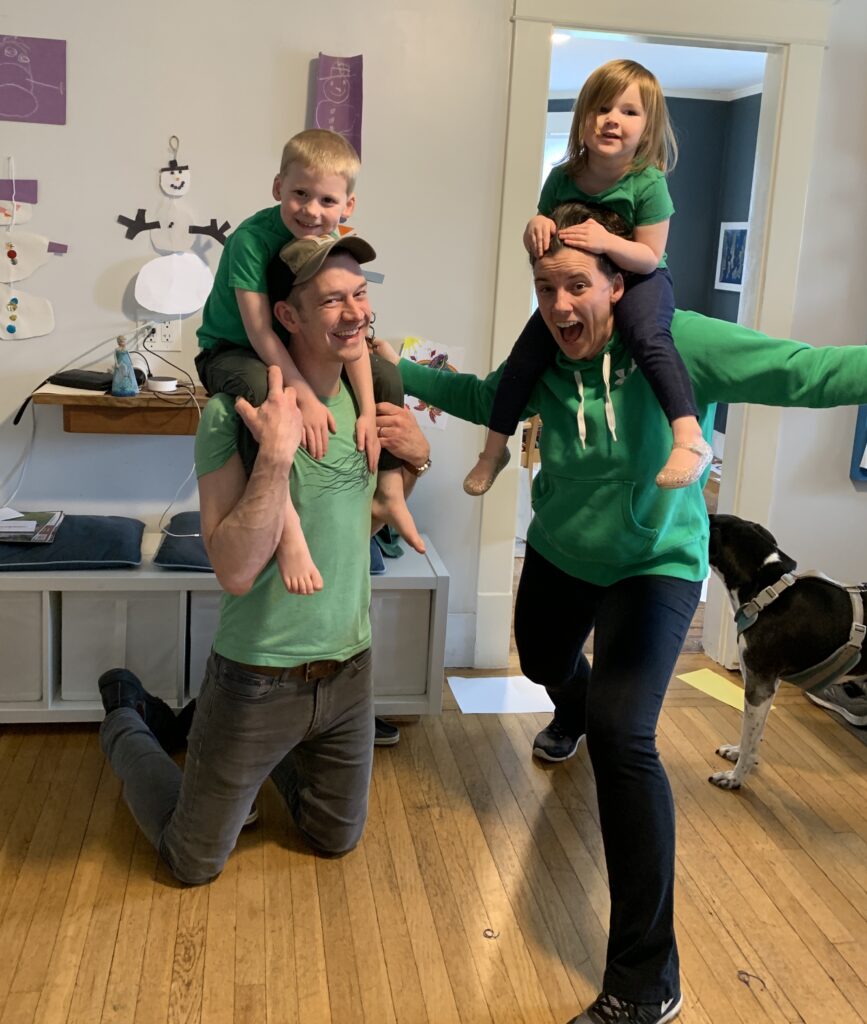 In what is now a blur of days from the spring of 2020, our parade stands out to me as a bittersweet memory of a confused and scared family that was trying to find some joy where we could. I think that’s why I jumped at the chance to write about Saint Patrick today. In a plot twist I would never have seen coming, this day has now become an eerie anniversary of the start of a very weird, very hard year.

The parade—and all of our Saint Patrick’s Day celebrations—have absolutely nothing to do with Saint Patrick himself, obviously. But every year when it rolls around I find myself reading up on Patrick. He wasn’t even Irish, y’all. He was born in Britain and when he was 16 he was kidnapped by Irish pirates and kept as a prisoner in Ireland. After his escape he made it back home and began to study for the priesthood. Once ordained he went back to Ireland and got to work converting the pagans there. He is largely responsible for Ireland being a Christian country today.

As with much of our Christian history, I have mixed feelings about Patrick’s efforts in Ireland, but as I was reading about his story I also revisited the words of Saint Patrick’s Breastplate, a hymn we still sing today that is attributed to him. If you can’t recall it from memory, it’s the hymn that goes on for 25 minutes and sounds like a dirge and then all of a sudden the tempo and the tune changes and no one has any idea what’s happening and we sing about Christ being everywhere and then just when you think you can follow along it changes back to a dirge. There are people that love this song and will bemoan my description, but I’m just telling you what I know.

Anyway, one version of this piece of work was been translated by Irish poet Kuno Meyer and reads as follows:

This week, as we enter the one year mark of this pandemic’s impact in our lives, I will be thinking a lot about the heaviness and challenge of this past year. There will be no parade again this March, though there is reason to start hoping for 2022. The light is starting to gleam on the horizon, but we aren’t there yet. Instead we continue to wake every day and head into the unknown—a little bit nervous, a little bit hopeful, a lot exhausted.

Last year, if I had known what was coming, I might have spent Saint Patrick’s Day clinging to the words above—the courage, the faith, the confidence in God’s presence and direction. Maybe in some ways that’s what I was doing as I marched around my house with my family in my green sweatshirt. But after a while the instruments—and the creativity—got discarded, and a numb monotony settled in. So maybe it’s this year I need these words, and the reminder that the light of sun, radiance of moon, and splendor of fire still glisten around us, even when things still feel dark.

And maybe I’ll pull my plastic trumpet from the dusty shelf for another go.