“One Lord, one Faith, one Baptism; One God and Father of all.”
—Order for Holy Baptism, The Book of Common Prayer

Grampa Fred spent his childhood on a farm on Cicero Avenue just outside the city limits of Chicago. If you know Chicago this seems implausible. Today, anything growing on Cicero is a weed sprung from cracked pavement. It’s the route to Midway Airport lined with blacktopped parking lots fronting aged strip malls. Fred suffered rheumatic fever in his early years during the Depression. It settled into his bones and heart and left him with one leg shorter than the other so that he required specially made shoes, one with a very thick sole. His heart condition kept him from sports and required multiple bypass surgeries in late adulthood. After high school his peers were drafted for World War II leaving Fred behind again. As a father he was often cantankerous and short-tempered but mellowed out during his grandparent years. What he lacked in brute physicality he made up for in intellect and wit. He was fond of Edgar Allan Poe, black licorice, and a good Old-Fashioned. He was an avid reader and meticulous gardener—composing inviting outdoor spaces from tidy weedless rows of canna lilies, marigolds, and geraniums.

Last summer some church paperwork requested my baptismal anniversary. Having no idea of the date, I consulted my early years photo album. In the baptism photo my infant self lies on a white knit blanket, surely made by Rijka, my mother’s mother’s mother who emigrated from the Netherlands at age 13 and lived to 101 while knitting sweaters, slippers, hats and blankets for her many descendants. Except at the table, we never saw her without work in her lap, needles in hand, tethered to a giant ball of yarn on the floor. Apparently she also made baby socks because the thick socks under my white satin moccasins look handmade. 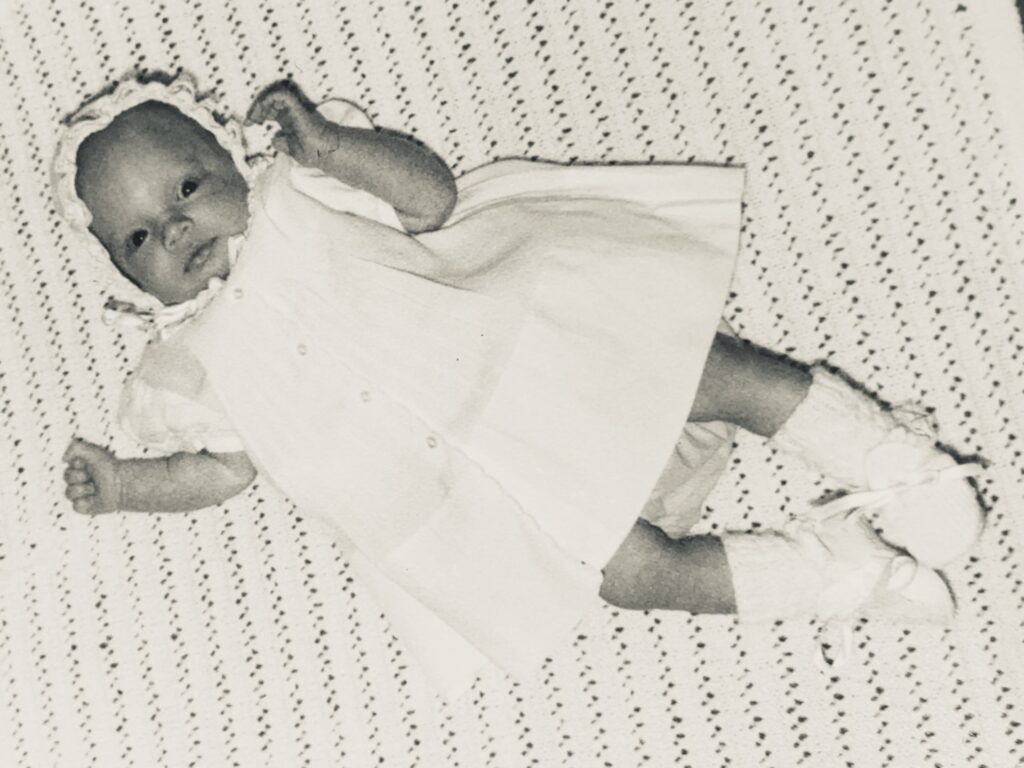 The dress was store-bought and starchy brand new. My mom’s script on the back of the photo reads: “Anne Marie’s christening, April 27, 1980.” How odd, I thought, that she, being Protestant (and later increasingly Fundamentalist) would refer to my baptism this way. I texted a picture of the back of the photo to my mom.

me: christening? How very catholic of you, mom.

me: really?! I remember you working for Cary but didn’t know she was a private investigator.

Mom: She investigated dram shop cases which I think is insurance for bars. I remember reports where there were altercations and they had to figure out if the bar owner was responsible for giving them too much liquor. Grampa’s insurance company insured the bars. He would have lunch with Cary on Friday, swap folders, and I would get new work for the next week.

Mom: yes you have a rich heritage

I didn’t ask if all of that was legal, but I’m good with keeping the legend of my first sacramental gown a little loose and wild. I do relish the idea of celebrating my first known baptismal anniversary and plan to eat a slice of tiramisu from the Earth Fare bakery in the middle of the afternoon to commemorate it. It’ll be just me, a generous square of dessert, a quiet car, and a spork. I’ll take the time to consider my relationship with baptism—my own and the sacrament in general.

At times over the years (especially during evangelical college), I’ve questioned infant baptism because it can’t be chosen or remembered. What meaning could it have to a baby? I accept it now along with many other mysteries and traditions of Christian belief. Some parts of our spirituality extend beyond personal memory or individual control and so require trust. I had nothing to do with my baptism at the time it happened, but I can have everything to do with living into it now.

As a dyed-in-the-wool Reformed believer (immersed in a Dutch sub-culture of Chicago), there is no reason to believe Grampa Fred would have known much about the Episcopal Church or considered an Anglican expression of faith. But as a thinker, gardener, and Christian who didn’t draw hard lines between the sacred and secular, he would have felt welcome and at home in its spaces and among its people. He would have found the idea of a baptismal anniversary a blessed curiosity and for that I am grateful.

When is your baptismal anniversary?

How do you live into your baptism now?