This is a story about John the Baptist and Fran McKendree.

I’m thinking you’ve heard of John before, but you may or may not have encountered Fran. Fran is a singer and songwriter, and for decades graced the Episcopal Church with his music and ministry.

In 2015, Fran came to spend a week at our summer camp in Rhode Island. It was our Music and Creative Arts Camp, and I asked him to lead the all-camp chorus block we had every day. Each summer at camp our counselors choose a passage of scripture to be our summer theme. That summer the theme was from the story of John baptizing Jesus in the Jordan River, specifically the words from Matthew 3:17, “You are my Son, my Beloved, and with you I am well pleased.” We wanted to consider how we, too, were God’s Beloved.

When Music Camp started Fran came to chorus just as I expected him to — full of life and joy and energy. He had the whole camp on our feet in moments, singing and dancing filled with Spirit. I watched as my campers and staff immediately fell in love with this gentle, gray haired man who moments before he picked up the guitar may have appeared too quiet and calm to bring about such robust activity. With a guitar and a microphone, however, he transformed.

Later on that first day of camp I approached Fran while he gathered with some of my staff. They each had their instruments, and I could hear them humming and playing softly together. Moments later I realized what was happening. Fran had decided we should write a song around our summer theme. He was teaching the chords to my staff, and together they were finding their way around the music.

I did not expect this. But I was spellbound. The music was stunning, and the excitement and joy of those musicians was palpable as they played and sang together.

At some point the next day Fran approached me and said, “Ok, we’ve finished the melody. I’ll send you a recording of it. Now we need some lyrics. You’ll need to write them.”

Um….excuse me? I don’t write song lyrics. I told him as much.

I seriously doubted his confidence in me, but when Fran invites you into a creative effort with him you don’t turn down the opportunity. So I started to live with the music, and in the moments when my brain does its best work (11pm, when I’m desperately trying to sleep) some of the first lyrics started to come to me.

The song continued to come together over the course of the week. Fran worked with our campers, staff, and adult volunteers to pull together every instrument we had on the property. At the end of the week we hosted our showcase for parents and friends, and the final number of the night was our song. The band played, we danced, our campers beamed, and the whole group sang their hearts out:

I will never forget it. It was one of the most profound moments of love and light and divinity that I have ever encountered, and we all felt it. Every single one of us.

When I wrote those lyrics about John the Baptist I wasn’t trying to draw any parallels to my own experience of camp that week. I was simply taking what I knew of this important biblical story and simplifying it for our song. I’ve always been taken with John’s hesitation around baptizing Jesus. They were cousins after all, and he was baptizing everyone else. Why wouldn’t he keep at it? But John recognizes that Jesus is special. He knows what is to come. And so he hesitates.

We don’t get any more information about John’s internal dialog or what made him decide to baptize Jesus even though it didn’t seem to make sense to him. All we know is that he did it anyway.

We do know what happens next. The story we still tell, year after year, of a profound moment of love and light and divinity that everyone felt, and that everyone remembered. You are my Beloved. 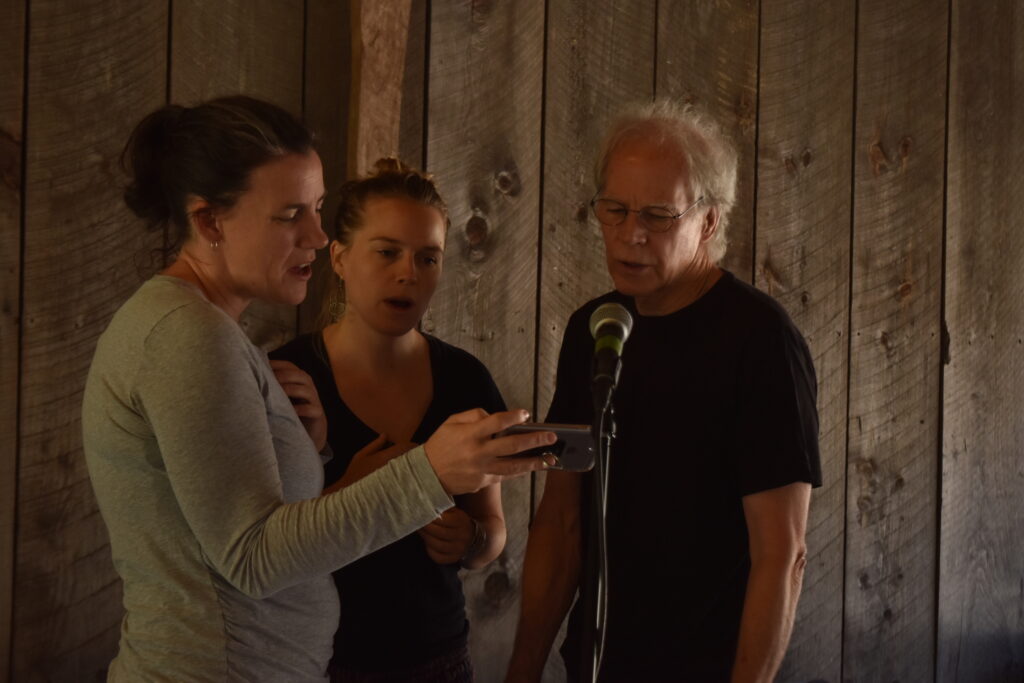 That moment happened because John showed up. John said yes. He baptized Jesus anyway, even though he didn’t think he had what it took to do it.

John and Fran have both taught me the importance of pushing through our doubt and insecurity to show up for God and for one another. We might think we aren’t enough, or that we don’t have what it takes. But God has what it takes, and we simply need to be courageous enough to say yes.

When we say yes – even a questioning, skeptical yes – God can and will surprise us.

Author’s Note: Fran died on Thursday, June 10th, and I deeply believe that he died knowing with certainty that he was God’s Beloved.