Much of how we understand Christianity today was decided in the 4th century CE. During this hundred-year period, the first two councils of the Church occurred in 325 and 381, Augustine of Hippo wrote the Confessions, the theological writings of the Cappadocian Fathers Basil, Gregory of Nyssa, and Gregory of Nazianzus were published, and Jerome translated the Bible into the common language of Latin. This Latin version of the Bible known as the Vulgate was the primary (and often only) Bible used from around the year 400 CE until after the Protestant Reformation. As a point of reference, the King James Version of the Bible was not completed until 1611 CE. For more than half of all Christian history, the Latin Vulgate Bible was the authorized version used by Christians around the world. Yes, other language translations were used in various places, but for use in the Roman Catholic Church, Jerome’s translation remained the Bible used most often.

Think about this for a moment.

The impact that this Bible translation has on 1200 years of history, on church traditions, on theological writings, and interpretations. The impact of the Latin Vulgate Bible cannot be undersold.

Today as Christians around the world are divided among denominations, as well as divisions that occurred over the authority of various biblical translations, female equality in leadership positions, and questions around human sexuality and gender, we need to host fast to the things that unite us in faith.

The Revised Common Lectionary is an attempt to do this very thing. The RCL provides multiple English and Spanish speaking denominations a common set of scriptures to be read, preached, and taught every Sunday and major feast day, using the New Revised Standard Version of the Bible.

I’m not saying that the Latin Vulgate is a translation I’d pick up to use today nor that followers of Jesus should read any translation of the Bible uncritically. But I do think that the Bible itself can and should be an instrument of unity for all Christians. 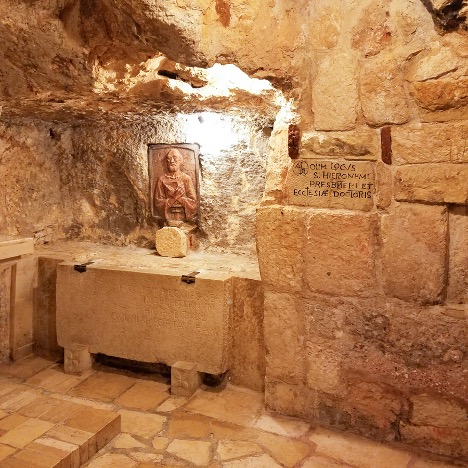 Photo of Saint Jerome’s Cell in the Church of the Nativity in Bethlehem taken by the author.

Connected to the Church of the Nativity in Bethlehem is the grotto or cell of Saint Jerome. Jerome established a monastery here sometime after 384 CE where he worked on his biblical translation and commentaries until his death on September 30, 420. Born in 347, Jerome was converted and baptized while a student in Rome. He was quite the networker in his thirties, studying under Gregory of Nazianzus, serving as secretary to Pope Damasus I, and befriending Augustine of Hippo.

Before Jerome’s work, there existed a version of the Bible in Old Latin. It was Pope Damasus who tasked Jerome with creating a more scholarly translation of the Bible in the language most spoken by the people. Jerome worked from the original Hebrew and Greek texts, wanting a translation that Jewish opponents could not challenge with the phrase, “that is not what the Hebrew text says.” He ran into an issue when he reached the Psalms as they were already regularly used in public worship from the Greek translation. So, Jerome translated the Psalms in the Vulgate from the Greek and published a translation of the Psalter from the Hebrew in an Appendix.

According to church historians, Jerome possessed quite a temper and correspondence with him quickly devolved into lengthy angry exchanges. The combination of his hotheadedness, academic arrogance, and self-congratulatory asceticism landed him in multiple controversies over his theology and Bible interpretation. However as is the case with most people, Jerome was complicated. Even with his ego and his short temper, Jerome was also known to honestly admit his shortcomings, and never sought (well- deserved) accolades in religious or academic worlds.

Today as we celebrate the contributions of Saint Jerome to our Christian faith, I invite you to sit with the members of your household and read multiple translations of a favorite Bible passage. Visit Bible Gateway where you can enter the passage and then read it in the Common English Bible and The Message (two translations that will be easier for younger children to understand) and compare it with the New Revised Standard Version which we use for Sunday worship in Episcopal churches. If you aren’t sure which passages to chose, try this portion of the psalm appointed for Jerome’s commemoration today or one of my favorites, the calling of Andrew in John’s Gospel.

Compare the different translations. What’s different about them and what’s the same? What words would you use to tell this story to a friend?