Sibling jealousy is a real thing. I see it between my two children all the time. I also have a sibling and growing up I was certainly jealous of her. As I read about James of Jerusalem in preparation for his feast day today, I kept wondering what in the world it must have been like to be the oldest brother of Jesus?! Really, what would it be like to share space with a sibling who is the Son of God? 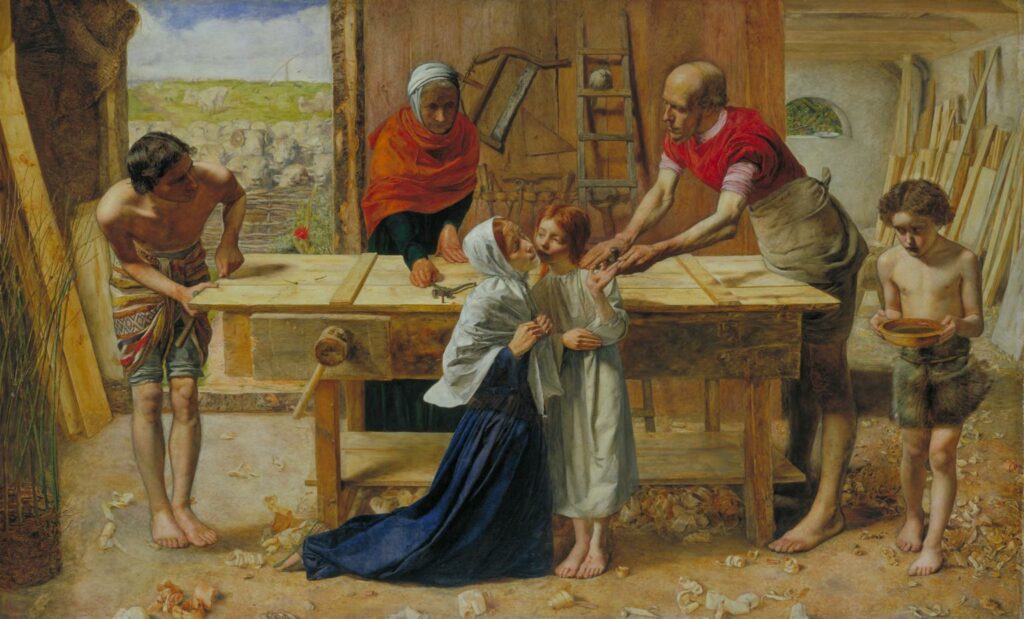 Christ in the House of His Parents by Sir John Everett Millais, Bt 1829-1896 Public Domain Image via Tate Gallery

I think James of Jerusalem started out the way many of us might have. Maybe his name could have been James the Jealous or James the Skeptical?  I can see a raised eyebrow now, as James watches and listens to his younger brother say and do unheard of acts. James is more than a little unsure about that messianic heritage. John 7:1-5 paints a pretty clear picture for us.

After this Jesus went about in Galilee. He did not wish to go about in Judea because the Jews were looking for an opportunity to kill him. Now the Jewish festival of Booths was near. So his brothers said to him, “Leave here and go to Judea so that your disciples also may see the works you are doing; for no one who wants to be widely known acts in secret. If you do these things, show yourself to the world.” (For not even his brothers believed in him.)

James is skeptical for a while; he had to live through the crucifixion to fully believe. How many times do we have to see to believe? Jesus knew this about James and he knows it about us, too. Jesus made a point to appear to James following his resurrection (1 Corinthians 15:7). As a result, James experienced a full change of heart, putting away his jealousy and skepticism. James is able to see that his brother Jesus was exactly who he had been proclaiming to be. I think of times in my life when I have seen and known, and my faith grew because of it.

How I missed James’ story until now, I will never know. Why don’t we talk more about this amazing person in the Bible? (Maybe we have and I was not paying attention to the sermon that day?) His early story mirrors what it is like to be a believer, at least for me. I am often skeptical. I often doubt. I often question. I talk to my kids about that, too.

We live in a tough world sometimes. It is hard for both kids and adults not to ask “why did God make these bad things happen?” There are plenty of people who would offer firm answers to that question. But, when my kids ask, I always answer that God doesn’t make the bad things happen, they just happen. That God is just as sad as we are when someone dies or gets sick. I remind my kids, and truly believe, that our faith helps us recognize the good in the midst of what seems terrible. As a parent, sometimes it takes a while to find the good.

In the Epistle of James, he offers us reassurance along those lines in the opening chapter:

My brothers and sisters, whenever you face trials of any kind, consider it nothing but joy, because you know that the testing of your faith produces endurance; and let endurance have its full effect, so that you may be mature and complete, lacking in nothing.
—James 1:2-4

I know in my heart of hearts my faith has grown out of significant times of doubt. Wrestling with the hard things and life and asking the difficult questions are critical components in any faith journey. It is incredible to discover someone so close to Jesus, did those things, too. Through the testing of his own faith, James found joy and endurance. He was present on the day the Holy Spirit descended in flames on Pentecost. His faith spurred the founding of the church in Jerusalem. He was called “Old Camel Knees” because his kneecaps were believed to be hardened from kneeling so long in prayer for others. James died a gruesome plotted death, persecuted for his faith. As James of Jerusalem is celebrated today, I will remember the example of his great faith grown from the beginnings of some sibling jealousy and honest doubt.