I’ve come across a lot of different religious thought and religious folks as someone who grew up in the South. One fall as Halloween approached, I remember a religious friend proudly declaring that when it came to Halloween, her children hadn’t even heard the word. I could tell this made her glad, and that she’d try to keep it this way as long as she could. Halloween was evil for her. It was a gateway into a realm that was dangerous and she wanted to keep her children safe from it. Halloween was a place where God was absent, where the devil and dark spiritual forces ruled.

For Episcopalians and other parts of the wider Christian family, Halloween is All Hallows Eve. It’s the first part of a three-day period that is sometimes referred to as Allhallowtide that also includes All Saints Day and All Souls Day. This mini season in the church year is to remember the dead and the communion of saints who are connected in the risen life and love of God.

There’s a sign by the side of the road on northbound I-65 outside Montgomery, Alabama I have driven past many times in my life. It’s a large white sign that says “GO TO CHURCH Or the Devil Will Get You!” It’s a dramatic sign with black and red letters. There’s also a silhouette of a depiction of the devil with horns, a scythe, and a tail (as well as little elf-like shoes on the devil’s feet). 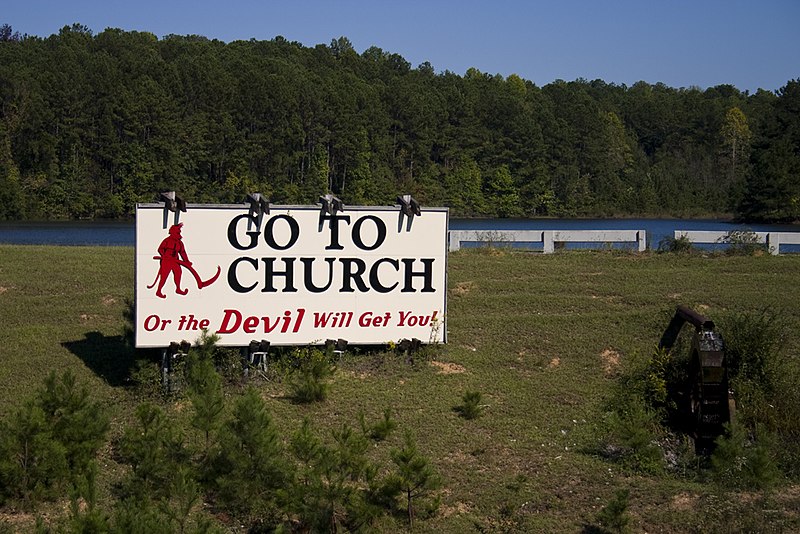 Photo by The Pug Father

I’m assuming the person who put the sign up is a Christian. But as I’ve reflected on that sign, I’ve wondered what it would be like if an alien landed on earth and happened to see that sign. What would they take away from it? They might determine that there was someone called the Devil who had the potential to get people. They might wonder what a church is. But I’m certain they wouldn’t have any thought of God, because God isn’t a part of the sign. Ironically, the sign is more about the devil than it is about God.

I think that’s how some people view Halloween. All the attention is on a scary figure or dark spiritual forces, but for them, God is nowhere to be found.

Halloween can be scary and spooky with themes of death and darkness, but it is entered into with a larger story in mind—the love of God which overcomes evil and death itself and connects us to those who have died. The light shines in the darkness and the darkness does not overcome it as John’s Gospel says. In fact, the darkness doesn’t seem as dark because the light of the love of God has penetrated the deepest darkness. Wherever you and I may find ourselves in that darkness, God is there present with us. The same God who descended to the dead and preached good news to the captives meets you and me in the darkness in which we find ourselves.

As the psalmist says in Psalm 139:

11 If I say, “Surely the darkness shall cover me,

and the light around me become night,”

12 even the darkness is not dark to you;

the night is as bright as the day,

for darkness is as light to you.”

Halloween isn’t about a godless world ruled by evil and dark spiritual forces. It’s precisely the opposite. It’s about the risen life and love of Jesus that enters into the deepest darkness because it knows no bounds in its pursuit of us, a love that fills all things and connects us to those who have gone before us.

That is good news. Maybe good enough to gather together in the middle of the light-filled darkness to dress up, throw parties, and ask for candy.

Jamie Osborne is an Episcopal priest currently serving as a chaplain in the Air Force. He and his family live in Nebraska.