When I was a child growing up in Philadelphia, I respected a man who lived across the street from me named Mr. Weaver. At the time, I couldn’t articulate why I admired him. However, my observations of him led me to believe he lived into who Christ called him to be. Even as a small child, I could fathom this mystery even though I couldn’t express it.

I noticed that Mr. Weaver was always kind and gentle. He faithfully attended the 6:30 morning mass every day and did so quietly. He preached the gospel without using words by living a simple life. He went to work every day, raised his children to become law abiding citizens, and loved his wife with a Christian devotion. He never drew attention to himself for the good things he did. He followed Christ, making it his way of spending every day.

On one hand, I never heard anyone say anything unkind about him. On the other hand, I never heard him receive any accolades for the devout life he lived. In my mind, even as a child, I comprehended his humility and his desire to serve only Christ. Consequently, he never worried about anything else. He didn’t fret over his material possessions. He never sought public praise. He didn’t seek prestige or prominence within the community. To me, it seemed that he was at peace with himself, with others, and with God.

As a young child, I looked up to him, which made me a bit odd for my age because most of my friends looked up to Hank Aaron, Roger Staubach, Dr. J, and Bobby Orr. Mr. Weaver’s name would never be mentioned in the same breath as these athletic icons. However, Mr. Weaver may have had more influence than anyone realized because of his humility and devout life. He was a man who practiced charity in word and deed through small gestures done diligently and frequently. I feel it is safe to assume that Mr. Weaver did all God had asked him to do. Therefore, Mr. Weaver may have been the most Christ-like person I have ever known.

Today as we celebrate Bartholomew, we may think of the Mr. Weavers in our own lives. Of the 12 apostles, we know very little of Bartholomew. He is only mentioned in the list of the apostles given by Matthew, Mark, and Luke. He isn’t mentioned in John’s Gospel unless you associate him with Nathaniel. (Some scholars believe that Nathaniel may be Bartholomew’s first name. However, this is speculation.)

Consequently, there isn’t much we know about Bartholomew. However, we know that he was with Jesus up to the crucifixion and was among the believers after the resurrection. We can infer he remained true to his faith although he did so quietly and without much public acclaim or fanfare. Bartholomew went about spreading the gospel through word and deed without calling attention to himself. In many ways, he reminds me of Mr. Weaver whose actions constantly pointed to God. I like to think of Bartholomew possessing the gentle strength required to remain humble in his pursuit of God’s righteousness. 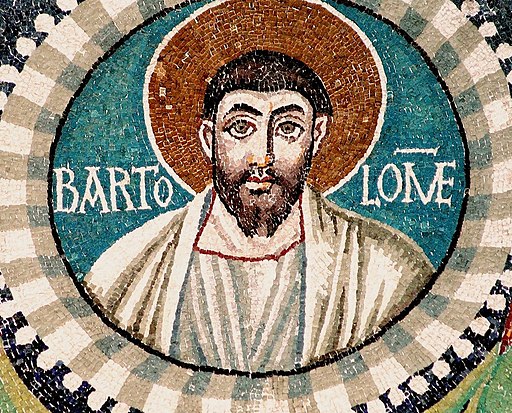 In an age where all we do seems competitive, from buying a car to planning a vacation, we seem to compare what we have and what we do with what others have and do. Have we ever considered how this erodes the sanctity to which we are called by God? Have we discerned how material wealth may distract us from who God calls us to be? Our children are also caught in this cultural cycle of merit and recognition. I wonder if we can sit back and in prayerful reflection consider our quiet Christian heroes like Mr. Weaver and Bartholomew, and pay them tribute for reminding us how our lives should point to God.

As I sit here thinking about Bartholomew and Mr. Weaver, I find some irony. See when I think of Bartholomew immediately Mr. Weaver comes to mind. When I was trying to think of the common childhood sports legends of the 1970s, I had to use Google to refresh my memory. So you tell me who had more influence on who I would eventually become as an adult – Mr. Weaver or Roger who? Let’s point out to our children our current day Bartholomews. You might be surprised to discover that they have already noticed them. It’s worth a mention.