On Friday mornings, on the corner of Pleasant and Union Streets in the heart of Brunswick, Maine, Nancy stands next to a picnic table the children of our congregation painted in vibrant colors. On the table there’s a sign that reads “Coffee on the Corner,” and next to it you’ll find a carafe of coffee, a jug of water, and a plate of homemade cookies, free to anyone who stops by. 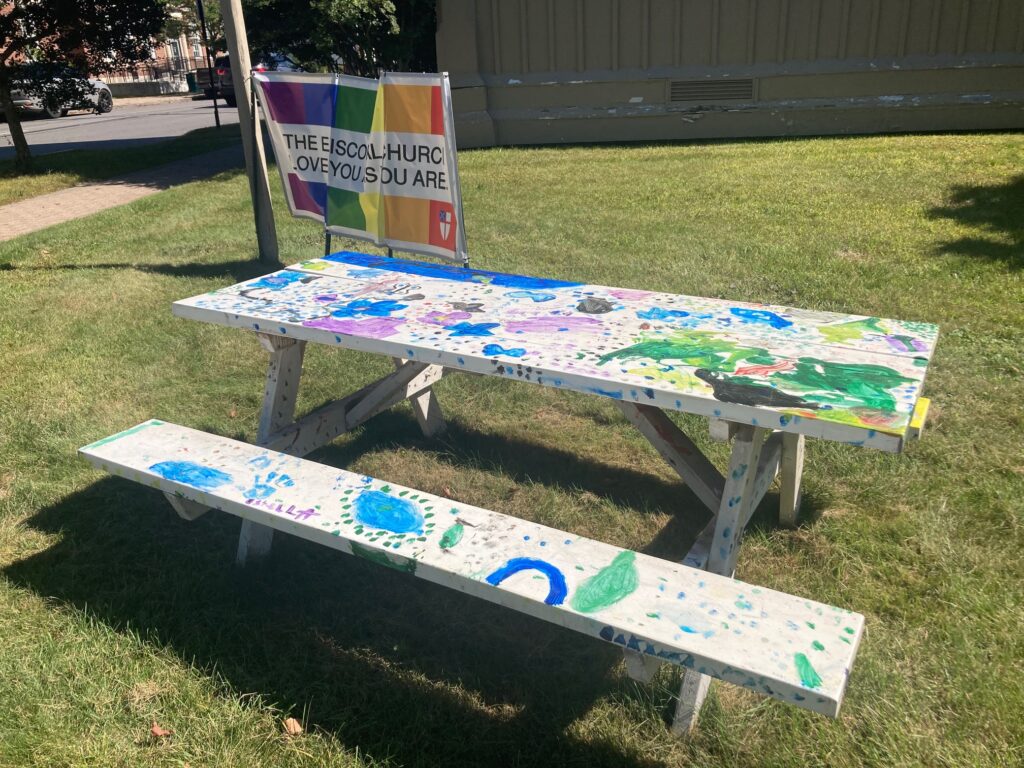 A truck carrying a young couple who work as roofers pulls over and they take time to share coffee, cookies, and conversation. A bicyclist is grateful for water. Drivers and passengers in cars stopped at the traffic light wave their greetings. Several people ask for directions. One man sits at the table for an hour, needing not only coffee and cookies, but a listening ear. The table sits on our church property, located across from the Post Office, next to the library, and less than a block from The Gathering Place, a day shelter that members of St. Paul’s were instrumental in creating. We never know who will stop by the table, only that our Baptismal Covenant calls us to “seek and serve Christ in all persons, loving your neighbor as yourself.”

This ministry of hospitality reminds me of so many other ministries and programs that have been inspired and run by faithful members of the church throughout the ages. Today’s Feast Day is dedicated to one such group: Episcopal Deaconesses, some 500 women who, between 1857 and 1970, were set apart — though not ordained — for servant ministries. Among them were teachers, missionaries, nurses, caregivers, administrators, and advocates.

Perhaps the one whose story touches me most deeply is Anna Alexander, our only Black Episcopal Deaconess, who was “set apart” as a deaconess in 1907 in the Diocese of Georgia. (See Maria Kane’s September 2018  Grow Christians post “The Rule-Breaking, Custom-Questioning Holy Rebellion of Anna Alexander.”) As both a deacon and a schoolteacher, I’m awed by her witness. When adding Anna Alexander to our calendar of saints, Presiding Bishop Michael Curry said of her,

“In a time when the races were separated, she brought people of difference races together, because she followed Jesus of Nazareth and his way of love. And in a time when black children did not have many opportunities for education, she made sure that they received them, because she followed the way of Jesus and his love. And in a time when women were not able to live completely into God’s call for them, she lived the fullness of God calling in her life anyway, starting schools, starting churches, spreading the good news to any and all regardless of race, class or kind.”

I love the statement that “she lived the fullness of God calling in her life anyway” – without ordination, without recognition: “anyway.”  And I’m moved not only by Anna Alexander’s story, but by the stories of all the other deaconesses who served with such determination, courage, and compassion through those 113 years, “anyway.”

I hadn’t heard of deaconesses when I was growing up in the Episcopal Church in the 1950’s and ‘60’s. When I was in 8thgrade, I wondered briefly if perhaps I was called to be a nun, but knowing that I wanted a family, I quickly realized that wasn’t going work. So then I pondered becoming a missionary; after all, I’d had a great-great-great grandfather who’d been a missionary. The ordination of women wasn’t on the radar then, but I wonder if I might have considered becoming a deaconess if I’d known they existed. Not until 1998, after long meandering years of discernment, did I recognize my call to the diaconate – and even then, I didn’t know that I was standing on the shoulders of these faithful deaconesses who had gone before me and paved the way.

It seems to me that these women serve as icons for all the women and men (and children) who, like Nancy serving Coffee on the Corner, or those who established The Gathering Place, find ways to be Christ’s hands and feet in the world. Whether the need is to build a school, start a church, create a safe and welcoming place to shelter during the day, or simply to offer a cup of coffee to passersby, we’re all of us invited to respond according to our gifts. As the prayer for today’s celebration of Episcopal deaconesses says, “May we, like them, bear the light of Christ to all people with their humility and grace.” In spite of whatever obstacles or fears we might face, and without any expectation of reward, may we follow their example to love and serve one another in the name of Christ, anyway.