Cheers erupted in the living room as the long pass was caught, and the wide receiver made good progress down the field. “Don’t get too excited yet, guys, that flag is going to be Offensive Holding and we’re probably not going to keep any of that yardage,” I said.

The camera closed in on the official who hollered, “Offensive Holding!”

Three pairs of eyes swiveled over to me where I had been wandering through on my way to another part of the house. “How did you know that, Dad? You don’t even like football!” the girls asked. 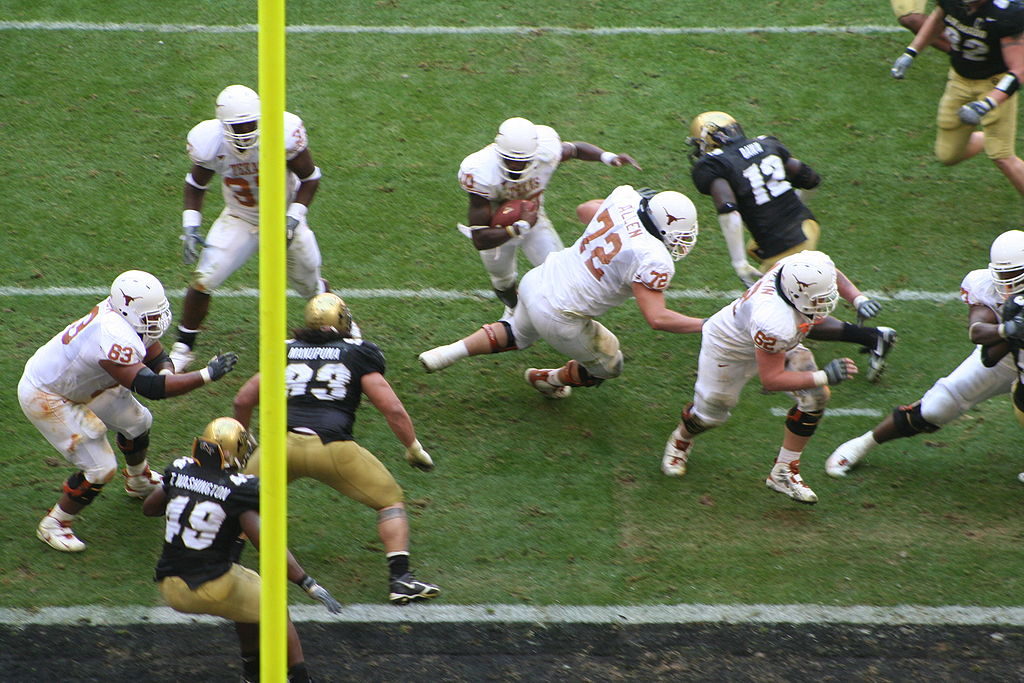 “Well,” I explained, “the quarterback had an awful long time to throw despite all of the guys down there, the flag was thrown right near the line of scrimmage and happened while the ball was still in the air. When they get all tied up in the way that they did and yet the quarterback is still able to get a throw off, then it’s usually because one of the linemen was holding to keep somebody from tackling the quarterback.”

It’s not that I don’t like football, it’s just that I don’t normally spend the time to watch it. I certainly don’t mind watching our hometown Baltimore Ravens play, but it’s not a habit of mine. I never played football. When I hit the weight rack at our gym today you can still tell who were the guys playing football in high school and college, and who was the guy playing Dungeons & Dragons.

But my father did play. He grew up in Texas in an era where football was a masculine rite of passage. Growing up, we would only watch a few teams—the Cowboys and the Browns, Ohio State and the University of Texas—but when we did, my dad would explain what was going on to my brother and me. He didn’t think that we’d ever use this knowledge to become star players; my father viewed this as a form of cultural literacy. As he saw it, part of being a guy is being able to talk sports with other guys and to understand the game even if it wasn’t a passion of ours. And—sure enough—his lessons have stood me in good stead over the years. Now I find myself passing them on to my daughters to the puzzlement of my wife (who knows exactly how little football I watch).

Did my dad enjoy having his football game interrupted by questions from us about what was happening or why he knew something? Probably not. There was probably a stretch of years where he couldn’t properly focus on the game because he would have to be constantly explaining things to us. But he didn’t complain about it: in his eyes, it was a duty, an important transfer of knowledge.

I have had some parents tell me that they don’t like having their children in church with them because they are a distraction. Their kids keep bugging them so that they can’t focus on what’s going on and therefore they don’t get anything out of it. But what if we shift the narrative a bit? Do they know what’s going on? Do they know how to play this most sacred game of the liturgy with understanding as to who’s doing what and why?

My dad didn’t just explain football to me—he and mom explained what was going on in church too: what we were doing and why it was important. I do the same for my girls too.

Of course kids aren’t going to get involved and engaged if they don’t know what’s going on! We have to teach them. We have to teach them why it matters to us, and why we persist in bringing them week after week. Sometimes this is as simple as a quick, “Stand up now, the deacon’s gonna read the Gospel and we are standing up to show our attention to the stories of Jesus…” This isn’t just filling them in on stage directions, it’s helping them see why we’re doing what we’re doing.

Yes, there may be a stretch of years where we as parents can’t worship with uninterrupted focus—but that’s ok. We are playing an important role in transferring cultural literacy to our children: valuable insights into why we’re Christian, what the liturgy and the faith mean to us, and why we feel it’s important to pass it on to them.

If this is the case, talk to your priest. Talk to your Christian Formation or Sunday School people. Can they do a class on what the liturgy means? For you—not just for your kids. And have you taken the time to stop and consider and to work out why and how this stuff matters?

That’s my challenge to you: be informed so that you are able to inform. Know why this stuff matters so you can communicate to your kids why it matters. If you’re a priest, make sure your people know. Christian Formation isn’t something that happens in Sunday School classrooms to children of a certain age; it must be the whole Body of Christ building itself up together into the wisdom and the love of God.

Editor’s note: Derek Olsen cares so much that we understand the spiritual meaning of the liturgy, he wrote a book about it. Inwardly Digest: The Prayer Book as Guide to a Spiritual Life is forthcoming from Forward Movement. You can pre-order it here. Also, this is the third post in a series. Here’s the first and the second secret of a pew whisperer.

How do you explain the sacred game of liturgy to children?